A clinical study of skin changes in pregnancy

Background: During pregnancy profound immunologic, metabolic, endocrine and vascular changes occur, that are responsible for the changes of the skin and its appendages, both physiologic and pathologic. Aims: We undertook a clinical study to find out the frequency and pattern of skin changes in pregnant women. Methods: All consecutive pregnant women were included in the study. Results: A total of 607 pregnant women were included in this study. Of these, 303(49.9%) pregnant women were primigravida and 304(51.1%) were multigravida. Skin changes grouped into: physiological changes (all cases), specific dermatoses (22 cases) and other dermatoses affected by pregnancy (125 cases). Most common physiological changes were pigmentary alterations seen in 555 (91.4%) followed by striae seen in 484(79.7%) cases. Of the various specific dermatoses of pregnancy, pruritic urticarial papules and plaques of pregnancy (PUPPP) was the most common disorder (14 cases) followed by pruritus gravidarum (5 cases). The most common dermatoses affected by pregnancy were candidal vaginitis (17 cases), acne vulgaris (15 cases), skin tags (15 cases), eczemas (14 cases). Conclusion: This study brings into focus various skin changes during pregnancy in south India.
Keywords: Physiologic changes, Pregnancy dermatoses, Specific dermatoses 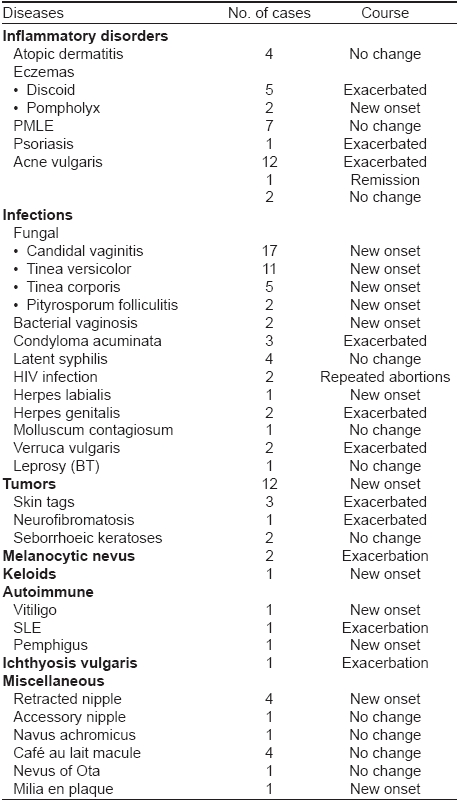 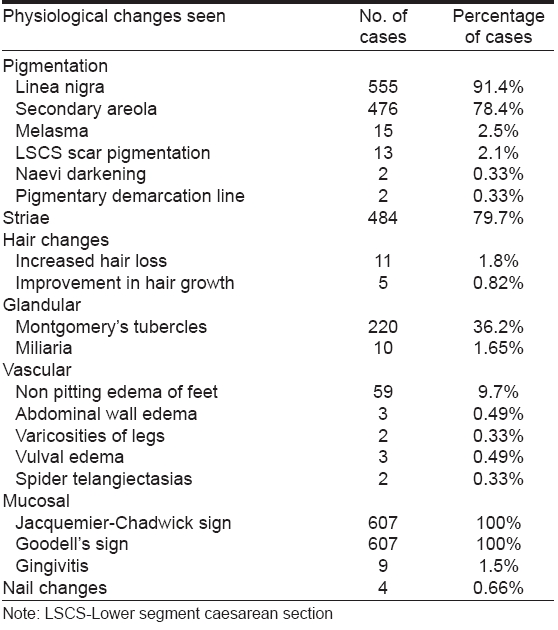 During pregnancy profound immunologic, metabolic, endocrine and vascular changes occur, which make the pregnant woman susceptible to changes of the skin and appendages, both physiologic and pathologic. [1] These alterations may range from normal cutaneous changes that occur with almost all pregnancies, to common skin diseases that are not associated with pregnancy, to eruptions that appear to be specifically associated with pregnancy. Likewise, the concerns of the patient may range from cosmetic appearance, to the chance of recurrence of the particular problem during a subsequent pregnancy, to its potential effects on the fetus in terms of morbidity and mortality. [2] Moreover, pregnancy modifies the course of a number of preexisting dermatological conditions. [3] We undertook this study to know the frequency and pattern of skin changes in pregnant women and various clinical parameters affecting them in south India.

The study was conducted in the out-patient department of Obstetrics and Gynecology, JIPMER, Pondicherry. Ethical committee clearance was obtained. All pregnant women seen between September 2003 and June 2005 were included in the study irrespective of the duration of pregnancy and gravidity. Informed consent was obtained before the interview and clinical examination. A total of 607 pregnant women were included in the study. Detailed history including demographic data, chief complaints related to skin, presence of itching, skin lesions, onset in relation to duration of pregnancy, jaundice, vaginal discharge, past or family history of similar lesions, exacerbating factors, associated medical or skin disorders etc. was elicited and recorded.

Complete cutaneous examination was done in all cases to study all the physiological changes of skin and its appendages. If any specific dermatosis of pregnancy was present, the morphology of skin lesions, distribution and the sites involved were studied. Relevant systemic examination was carried out. If any preexisting skin disease was present, any evidence of exacerbation or remission was recorded.

Appropriate investigations were done to confirm diagnosis if required. Bedside laboratory procedures like Tzanck smear, KOH mount and Gram′s stain were carried out. To confirm diagnosis skin biopsy and DIF were done in a few cases. In all cases with history of pruritus related to specific disorders of pregnancy, liver function tests were done. Screening with VDRL and ELISA for HIV was done in all the cases. Examination of the ′contact′ was done in all cases of sexually transmitted disease. Results were tabulated and analyzed.

Past history of striae and pigmentary changes was observed in 204 multi gravidas. None of them had used oral contraceptive pills. A history of extramarital sexual exposure was obtained in 2 pregnant women and six of their respective partners.

Among the physiological skin changes observed, most common were pigmentary changes in 555 (91.4%) cases including hyperpigmentation of skin, melasma, linea nigra, development of secondary areola followed by striae in 484 (79.7%) cases [Table - 1].

In this study, 14 pregnant women were found to have pruritic urticarial papules and plaques of pregnancy (PUPPP). Of these fourteen, 12 (85.7%) were primigravidas and 2 were multi gravidas (14.3%). One patient had fetal complications with IUGR and preterm delivery of a male infant weighing 2.2 kgs.

Five cases of pruritus gravidarum were seen in this study. Of these five, three (60%) were primi gravidas and 2 were multi gravidas (40%). Liver function tests were normal except for raised alkaline phosphatase in 3 patients (60%). No adverse fetal outcome was seen in the five pregnant women.

Many of the symptoms and signs are so common that they are not usually considered as being abnormal, but regarded as physiological and can sometimes provide contributory evidence of pregnancy. The commonly encountered physiological changes include striae distensae (occurring in up to 90% of pregnant women), hormonal alterations resulting in melasma (occurring in up to 75% of women during pregnancy) and generalized hyperpigmentation. Vascular alterations result in edema, palmar erythema, spider nevi, varicosities, cutis marmorata, gingival edema and redness. Some women also notice hair and nail changes. Similarly the activity of eccrine and sebaceous glands increases, while that of apocrine gland decreases. [4] In addition, pregnancy can modify a number of concomitant dermatoses and there are some pathological skin conditions that are virtually pregnancy specific.

The most common physiological changes are pigmentary alterations, stretch marks, vascular spiders and telogen effluvium. [5] In our study, 91.4% of cases had hyperpigmentation, the most common being linea nigra seen in 91.4% cases. Secondary areola developed in 78.4% cases. The other sites of increased localized pigmentation were seen over the abdomen, face, buttocks, scar pigmentation, breasts, axillae, neck in that order. Generalized darkening of skin was reported in 4 (0.66%) cases. These findings are comparable to other studies. [4],[6],[7]

Striae distensae (striae gravidarum) develop in up to 90% of women during the sixth and seventh month of pregnancy. [1] In our study, striae were seen in 484 (79.7%) cases of which 217 (44.8%) were primi gravidas and 267 (55.2%) were multi gravidas. Onset was most commonly seen during the second trimester. The most common site seen in primigravidas was lower abdomen and pink shiny striae were most common. Multi gravidas showed mostly white atrophic striae. Muzaffar et al . [4] found 77.1% (108/140) of their cases developed striae gravidarum. Raj et al . [6] also found striae distensae in 75% of pregnant women which is closer to that seen in our study. Chang et al . [12] found incidence of striae gravidarum in their survey to be 55%.

Striae are uncommon in Asian and African-American women and there seems to be a familial tendency. [1] Physical factors (stretching secondary to increase in the abdominal girth) play a role in the development of the striae. [11],[13] Lower birth weight and smaller babies as compared to Caucasian women may be related to 123/607 (20.3%) pregnant women not developing striae in our study. Poindevin et al . [14] in 1959, observed that women with lighter complexions had a greater tendency to develop striae compared with women of darker complexions.

Vascular changes result from distention, instability and proliferation of vessels and regress postpartum. Non pitting edema of legs, eyelids, face and hands is present in about 50% of women during the third trimester. [10] The edema decreases during the day and is thought to be due to secondary sodium and water retention in conjunction with increased capillary permeability. [5] Vascular changes seen in our study include nonpitting edema of feet in 59 (9.8%) cases and abdominal wall edema in 3 cases.

Vascular spiders (spider angiomas, nevi aranei) appear in 67% of white and 11% of black women between the 2nd and 5th month of pregnancy. Palmar erythema occurs in 66% of white and 33% of black women beginning in first trimester. [5] No cases of palmar erythema were seen in our study which may be related to less visibility in darker skin. In a recent study by Muzaffar et al ., [4] palmar erythema was seen in 12.1% of cases, varicosities of lower legs in 2.8%, vascular spiders in 1.4% and cutis marmorata in 0.7% cases. Varicosities are most common in anus and legs, appearing in 40% of pregnant women during the 3rd trimester. [10] Raj et al . [6] noted varicose veins in 6 out of 1,175 women. Esteve et al . [7] observed vascular changes in 50 women including vascular spiders in 32 out of the 60 women.

During pregnancy, the gingivae enlarge, darken and become red and swollen in up to 80% of women. Edema and hyperemia due to hormonal changes as well as local irritation and nutritional deficiencies may be responsible. [5] Gingivitis not attributable to bad oral hygiene was seen in 9 out of 607 pregnant women. In a study by Muzaffar et al . [4] 23/140 (16.4%) had gingival edema and redness. Raj et al . [6] had seen 3 cases of pyogenic granulomas in their study.