Background: The improvement in insulin resistance and acne lesions on low glycemic load diets in various studies suggests that diet plays a significant role in acne pathogenesis.
Aims: To compare the efficacy of a low glycemic load diet plus topical benzoyl peroxide 2.5% gel with that of only topical benzoyl peroxide 2.5% gel in grades 1, 2 and 3 of acne vulgaris.
Methods: In a randomized controlled trial, 84 patients with grades 1, 2 and 3 acne vulgaris were divided into two groups, to receive a low glycemic load diet and no dietary intervention respectively. Acne lesions (face) were scored and graded at baseline and 4, 8 and 12 weeks. Homeostasis model assessment of insulin resistance and body mass index were measured during the first and last visits. Statistical analysis was done with Statistical Package for the Social Sciences, version 17.0.
Results: Both groups showed significant reduction in acne counts at 12 weeks (P = 0.931) with no statistically significant difference between the groups. The differences in body mass index and homeostasis model assessment of insulin resistance between the groups were statistically significant (P = 0.0001). Group 1 showed reductions in body mass index and homeostasis model assessment of insulin resistance values at the end of the study, whereas group 2 did not.
Limitations: Application of mild topical cleanser in both the groups might have contributed to the improvement in epidermal barrier function, and topical application of 2.5% of benzoyl peroxide gel in both groups contributed to the improvement in acne counts.
Conclusions: A low glycemic load diet did not result in any significant improvement in acne counts.

Acne is a very common skin disorder affecting individuals of all age groups.[1],[2] Populations that consume low glycemic load diets, such as the Kitavan islanders of Guinea, Ache hunters, Inuits and rural Brazilians, tend to be acne-free.[3] An increase in the incidence of acne was observed in Inuits, Okinawa islanders and Chinese after they started following a western diet.[3] These observations suggest that lifestyle factors like diet may have a role in acne pathogenesis. A high glycemic load diet causes hyperinsulinemia, high androgen bioavailability, increased insulin-like growth factor-1 and acne.[4],[5] Increased insulin-like growth factor-1 further increases dihydrotestosterone and dehydroepiandrosterone sulfate, which increase sebum secretion and sebocyte proliferation.[4],[5] Increased insulin levels in blood elevate plasma levels of epidermal growth factor, transforming growth factor-β and free nonesterified fatty acids, thereby causing sebaceous gland inflammation and acne.[6] We conducted this study to determine the efficacy of a low glycemic load diet in the management of acne vulgaris.

The study was designed as a randomized controlled investigator-blinded trial. After obtaining institutional ethical committee clearance, a total of 84 patients (male and female, age 14–29 years) with acne of grades 1, 2 and 3 were included randomly from among dermatology outpatients in a tertiary care centre between September 2014 and May 2016. Patients already on topical medication, those on oral retinoid in the last 6 months or oral antibiotics in the last 15 days and pregnant women were excluded.

Patients were randomly assigned to two groups of 42 participants each, using the chit in the box method. Allotment was done by a registrar not involved in the rest of the study. Detailed history was taken from all participants including details of diet, duration of acne, treatment history, family history, personal history, cosmetic use and any specific aggravating factors.

(Glycemic load = Glycemic index of the food item × its carbohydrate content (g)/100. Glycemic index values were referred from a reference table,[7] from the Sydney University's Glycemic index website [8] and from the National Institute of Nutrition, ICMR, Hyderabad, India.[9])

Every participant in group 1 received an individualized diet plan from the dietitian on the first visit which matched their baseline diet. Group 1 patients maintained a diet chart with a daily menu which was examined during every visit to determine adherence.

Topical 2.5% benzoyl peroxide gel and a mild noncomedogenic cleanser were advised for all patients in both the groups.

Sample size was determined by the formula: η = 2(Zα+ Zβ)[2]σ[2] / d [2]. With the power of study 90% and the confidence level of 95%, substituting in the above formula, the number of participants required for the study was 84. A total of 111 were enrolled in the study; though some patients were lost to follow-up and some more discontinued the treatment, we retained the required number [CONSORT Flowchart]. 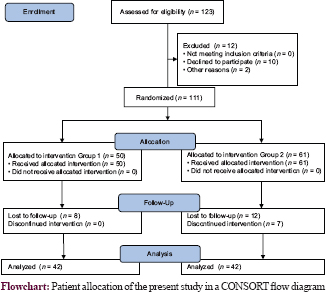 Adherence to the low glycemic load diet in group 1 as determined from their daily diet chart was up to 75%.

Table 3: Acne counts of the analyzed patients and allocated patients

A large Chinese study conducted among undergraduate students found that 78% of first-degree relatives had acne, which was heritable in nature.[21] Many retrospective studies have identified the genetic basis and clustering of familial cases in acne.[22],[23],[24],[25],[26]

In a cross-sectional study including Kitavan and Ache hunters, Cordain et al. observed that there was no acne in these populations consuming low glycemic load diets.[2] They proposed that a high glycemic load diet is a major factor contributing to acne in Western populations.[2] Kim et al. observed that consumption of fermented milk with lactoferrin decreases the total non-inflammatory and inflammatory lesion counts.[27] Kwon et al. also found that patients consuming low glycemic load diets showed decrease in the number of acne lesions after 5 weeks.[28] Di Landro et al. found that there was a positive association between acne and frequent consumption of milk and skimmed milk.[29] In our study, patients who consumed a low glycemic load diet showed decrease in body weight after a period of 12 weeks while those on a regular diet did not. Consuming high glycemic index and carbohydrate-rich foods repeatedly causes acute hyperinsulinemia in adolescents. Hyperinsulinemia has been implicated in acne pathogenesis due to its association with high a bioavailability of androgens and high concentrations of free insulin-like growth factor I.[4],[5] Rapid increase in insulin levels results in a rapid lowering of blood sugar. In turn, androgen released by the adrenal glands signals the liver to secrete glycogen from its storage to increase blood sugar towards normal. Decrease in blood sugar also stimulate food cravings. Finally, these cycles continue in a chronic manner. Frequent hyperinsulinemia increases appetite and then body weight and body mass index.[30]

Nagpal et al. conducted a cross-sectional study to determine the prevalence of insulin resistance and metabolic syndrome in men affected by acne and found that post-adolescent males with acne and higher body mass index more commonly have high insulin resistance.[31]

Limitation of our study is application of mild topical cleanser in patients of both groups. Topical cleanser improves the normal skin barrier along with topical application of 2.5% of benzoyl peroxide gel in both groups. Topical benzoyl peroxide itself is a potent topical agent against acne. These might be the main factors responsible for significant reduction in acne counts in group 1 and group 2, so no significant difference in acne counts in between the two groups was observed. So a study on the effect of low glycemic load diet alone on acne may help us to overcome this limitation. Even the adherence to diet chart was only 75% in group 1 and this might be a limitation of the study. The other limitation would be that no specific diet chart was given to the group 2, so it is possible that some/many of them paid more attention to their diets once they were a part of the study.

The authors certify that they have obtained all appropriate patient consent forms. In the forms the patients have given their consent for their images and other clinical information to be reported in the journal. The patients understand that their names and initials will not be published and due efforts will be made to conceal their identity, but anonymity cannot be guaranteed.

We are grateful to Jestina Rachel Kurien for helping us to modify the manuscript.