Acantholysis revisited: Back to basics

Acantholysis means loss of coherence between epidermal cells due to the breakdown of intercellular bridges. It is an important pathogenetic mechanism underlying various bullous disorders, particularly the pemphigus group, as well as many non-blistering disorders. Although a well-known concept, the student often has to refer to many sources to comprehend acantholysis completely. Thorough knowledge of this topic helps in clinching many diagnoses. The etiopathogenesis, classification, clinical signs, and laboratory demonstration of acantholysis are discussed in detail to help students build clear concepts. We have focused on various distinguishing points in different disorders for an easy grasp of the topic.
Keywords: Acantholysis, Nikolsky′s sign, primary, secondary

The term acantholysis, coined by Auspitz in 1881, is derived from the Greek words akantha, meaning a thorn or prickle, and lysis, i.e. loosening. [1],[2] Acantholysis is defined as the loss of coherence between epidermal cells due to the breakdown of their intercellular bridges. [3],[4] The cells remain intact but are no longer attached to each other; they tend to acquire the smallest possible surface area and become rounded up, resulting in intra-epidermal clefts, vesicles and bullae. Acantholysis is the primary pathological change occurring in pemphigus and its variants and other conditions like Hailey-Hailey disease (HHD). [5] This article presents acantholysis in a nutshell, catering to the needs of the dermatology student.

Pathogenesis and classification of acantholysis

Desmosomal cadherins are the primary pathological targets in the pemphigus group of disorders and some conditions like bullous impetigo. The intercellular space of desmosomes includes two chief glycoproteins; the desmogleins (Dsg) and desmocollins, which in conjunction with the cytoplasmic counterparts plakoglobin and plakophilin, bring about the complex intercellular attachment. [6] Experiments in the recent past have partially elucidated the multiple triggers, targets, and steps involved in acantholysis.

There are a number of triggering factors, which can commence the cascade of acantholysis [Table - 1]. Acantholysis is initially characterized by separation of the inter-desmosomal regions followed by splitting and disappearance of desmosomes, forming intercellular gaps. These intercellular gaps result in fluid influx from the dermis leading to cavity formation, which may be suprabasal, mid-epidermal, or subcorneal in location. The acantholytic cells remain metabolically active for some time and retain their capacity for DNA synthesis. Degeneration and cell death represent secondary phenomena. [4]

Acantholysis has been broadly classified as primary or secondary [Table - 2]. 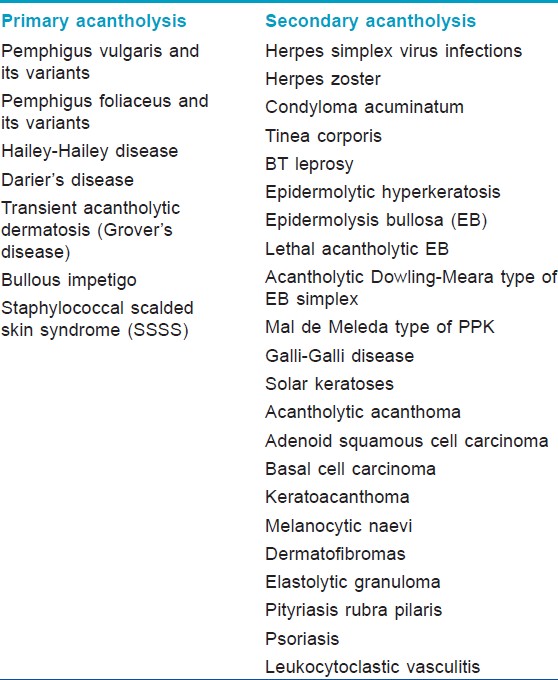 Primary acantholysis: Dissociation and disintegration of desmosomes leads to the separation of keratinocytes; either due to direct injury to desmosomes or due to hereditary defects in their construction. [11] Thus, in these diseases, acantholysis is the primary event leading to the formation of intra-epidermal cavities and hence the manifestations of the disease. Primary acantholysis is of prime pathogenetic relevance in diseases of the pemphigus group.

Mechanism of acantholysis in pemphigus: It is an enigmatic process, and newer aspects are continually being discovered. The major auto-antibodies in pemphigus target Dsg-1 (PF and PV) and Dsg-3 (PV). The conventional concept is that PV IgG binds to Dsgs resulting in stearic hindrance, interference with desmosomal cadherin trans-interactions and loss of intercellular adhesion. The Dsg compensation theory explains the different level of blistering in PV and PF. Plasminogen activation in lesional epidermis is also believed to contribute to acantholysis. [7] However, recent immuno-electron studies demonstrate that desmosomes remain intact till the late stages of acantholysis when they are cleaved behind the desmosomal plaque, due to shearing forces produced by collapsing cells. [12] Hence, the pivotal role of anti-Dsg antibodies in pemphigus is being questioned. [13] In addition to Dsgs, pemphigus auto-antibodies recognize numerous other antigens. In a recently-described model [Figure - 1], the proposed initial step is the binding of antibodies to peripheral myelin protein (PERP) and/or cellular acetylcholine receptor (AChR), which leads to dissociation of adhesion molecules and also initiates apoptosis. Subsequently, tonofilaments collapse and keratinocytes shrink with sloughing of desmosomes, which elicits an autoimmune response. Finally, anti-Dsg antibodies bind to their targets precluding formation of new intercellular junctions. [14] The linking of the apoptotic pathways to basal cell shrinkage and suprabasal acantholysis has been termed apoptolysis. [15]

In HHD, acantholysis results from a genetically determined defect, resulting in desmosomal instability, in combination with exogenous factors like bacterial toxins, trauma, or maceration. [4] A mutation in ATP2C1 gene disturbs keratinocyte differentiation, proliferation and adhesion, which in combination with other triggers, results in the separation of keratin filaments from desmosomal plaques. The keratin filaments aggregate in the perinuclear area as whorls leading to widespread partial acantholysis. [8] A similar phenomenon plays a role in Darier′s disease.

Few authors include bullous impetigo and staphylococcal scalded-skin syndrome (SSSS) under primary acantholysis. [4] Melish and Glasgow showed that Exotoxin (ET) produced by Staphylococcus aureus causes bullous impetigo and SSSS. ET results in loss of cohesion between keratinocytes by cleaving Dsg1, as confirmed experimentally. [16] Its amino acid make-up is analogous to that of chymotrypsin-like serine proteases. [17]

Biochemical acantholysis: The term describes a special type of primary acantholysis brought about without antibody mediation. [25] Drugs and food items of the thiol or phenol groups can trigger pemphigus through this mechanism. The proposed mechanisms for thiol-induced acantholysis include direct biochemical effect by formation of thiol-cysteine bonds disturbing cell adhesion, protease activation, and immunological reaction with the formation of a neo-antigen. Possible mechanisms of phenol-induced acantholysis include induction of IL-1α and TNF-α release from keratinocytes, which result in the dysregulation of proteases like plasminogen activator. [26]

The site of acantholysis in a given condition helps in the diagnosis, especially in blistering disorders. In PF and pemphigus erythematosus, acantholysis is usually confined to the sub-corneal layer due to involvement of Dsg1, which is distributed predominantly in the upper epidermis. In PV, the clefting occurs in the suprabasal epidermis due to involvement of Dsg3, predominantly expressed in the lower epidermis. In HHD, although acantholysis is often focal or incomplete, it tends to affect the entire epidermal thickness [Table - 3].

The Russian dermatologist Pyotr Vasiliyevich Nikolskiy first described this sign. (Although his name was spelt Nikolskiy, the sign is better known as Nikolsky′s) [34] The sign is elicited by applying tangential pressure with a finger or thumb to the affected skin, peri-lesional skin, or normal skin in patients with suspected pemphigus [Figure - 2]. It is termed positive if there is extension of the blister and/or removal of epidermis in the rubbed area. [35] "Marginal Nikolsky′s sign" describes the extension of the erosion on the surrounding normal-appearing skin by rubbing the skin surrounding existing lesions while "Direct Nikolsky′s sign" is the induction of an erosion on normal-appearing skin, distant from the lesions. [36] Uzun and Durdu tested the utility of Nikolsky′s sign in 123 pemphigus cases and found it to be a moderately sensitive but highly specific diagnostic tool. The marginal Nikolsky′s sign was more sensitive (69%), while the direct Nikolsky′s sign was more specific (100%) to diagnose pemphigus. [37]

The underlying pathophysiology of this sign is the acantholysis occurring in affected areas as well as in areas with intact, normal-appearing skin. [34] Microscopic Nikolsky′s sign is the subclinical counterpart of Nikolsky′s sign. Tangential pressure on apparently normal skin, exerted as in eliciting clinical Nikolsky′s sign, produces the classical microscopic changes of PV or PF in the epidermis that can be visualized on skin biopsy. Hameed and Khan demonstrated a positive microscopic Nikolsky′s sign in 73.9% of pemphigus patients who were biopsied after applying tangential pressure. There were no changes in the biopsies of healthy controls. This technique could be of value in areas where immunofluorescence is not readily available. [38] Nikolsky′s sign is usually positive in diseases with epidermal acantholysis and typically negative in diseases with dermo-epidermal separation, [34] thus helping to distinguish pemphigus from bullous pemphigoid (BP). [35]

Nikolsky′s sign is further characterized as "wet" Nikolsky′s, in which a moist, glistening, eroded base is seen after pressure is exerted on the skin; and "dry" Nikolsky′s, in which the base of eroded skin is dry. In active PV, a wet sign is expected, whereas the dry sign indicates re-epithelialization beneath a PV blister or may suggest PF and hence a higher level of blister formation. [35] In "Nikolsky′s phenomenon," the superficial epidermis is felt to move over the deeper layers, and instead of immediate erosion formation as in Nikolsky′s sign, a blister develops after some time. [39]

False Nikolsky′s sign or Sheklakov′s sign is positive in sub-epidermal blistering disorders. It involves pulling the peripheral remnant roof of a ruptured blister, thereby extending the erosion on the surrounding normal skin. The erosions thus induced are limited in size, lack the tendency to extend spontaneously, and heal rapidly. Pseudo-Nikolsky′s sign is positive in Stevens-Johnson syndrome, toxic epidermal necrolysis and in some cases of burns and bullous ichthyosiform erythroderma. However, it can be elicited only on the affected or erythematous areas. Here, the underlying mechanism is necrosis of epidermal cells and not acantholysis as in true Nikolsky′s sign. [39]

Described originally by Wilhelm Lutz, it is the enlargement of an intact blister by the application of mechanical pressure on its roof [Figure - 3]. If one carefully presses upon the blister, it enlarges towards its periphery due to the mechanical pressure of the blister fluid. [36] In PV, the blister extension has a sharp angle, whereas in BP, the advanced border is rounded. [36]

Acantholytic cells are easily demonstrated using a side-lab cytologic smear (Tzanck smear). Introduced by Arnault Tzanck, this is a simple technique to analyze vesiculobullous diseases. The base of an unroofed blister is gently scraped; the material obtained is gently smeared onto a clean glass slide, allowed to air dry and stained with Giemsa. [40]

A typical acantholytic cell of PV as seen in a Tzanck smear is called a ′Tzanck cell′ [Figure - 4] and [Figure - 5]. It is a rounded keratinocyte with a hypertrophic or dysmorphic nucleus, hazy or absent nucleoli, increased nuclear to cytoplasmic ratio due to the loss of normal intercellular cohesion and abundant eosinophilic to basophilic cytoplasm. The staining is more intensely basophilic near the cell membrane (′mourning edge′) because of cytoplasmic condensation at the periphery, resulting in a perinuclear halo. [27],[40] Other findings, not pathognomonic to pemphigus but frequently detectable, are Sertoli′s rosettes and ′streptocytes.′ Sertoli′s rosettes are composed of a central necrobiotic keratinocyte with a surrounding leukocyte rosette. A ′streptocyte′ is a chain of leukocytes, joined by a filamentous, glue-like substance. Sertoli′s rosettes and ′streptocytes′ can be observed in herpes zoster and the pemphigoid group, respectively. [30] The presence of typical Tzanck cells in large numbers, either discretely or as loosely adherent clumps, without significant surrounding inflammation substantiates the diagnosis of pemphigus. [27],[28]

Acantholysis is a key phenomenon in various skin diseases. Complete knowledge regarding its pathogenesis, location, associated signs, and demonstration is of profound importance for dermatology students and is an invaluable aid in arriving at a proper diagnosis, which this article has tried to address.

We would like to acknowledge Dr. Uma Nahar Saikia, Additional Professor, Department of Pathology, PGIMER, Chandigarh for providing the Tzanck smear photographs.