Background: There is a clear association between autoimmune thyroiditis (AT) and chronic urticaria/angioedema (CUA). However, not all patients with AT demonstrate urticaria. Aims: The aim of the study was to investigate in which patients with AT did CUA become a problem. A sensitive inflammation marker, neopterine (NP) was used to confirm whether the severity of inflammation in the thyroid gland was responsible for urticaria or not. Methods: Neopterine levels were assessed in patients with AT with urticaria and without urticaria. Furthermore, levels were compared in relation to pre and post levothyroxine treatment. Twenty-seven patients with urticaria (Group 1) and 28 patients without urticaria (Group 2) were enrolled in the study. A course of levothyroxine treatment was given to all patients, and urine neopterine levels before and after the trial were obtained. Results: All patients completed the trial. Mean age in Group 1 and Group 2 was similar (35.70 ± 10.86 years and 38.36 ± 10.38 years, respectively) (P=0.358). Pre-treatment urine neopterine levels were significantly higher in Group 1 (P=0.012). Post-treatment levels decreased in each group, as expected. However, the decrease in the neopterine level was insignificant in the patients of Group 2 (P=0.282). In Group 1, a significant decrease in post-treatment neopterine levels (P=0.015) was associated with the remission of urticaria. Conclusion: In patients with CUA and AT, pre-treatment elevated levels of NP, and its decrease with levothyroxine treatment along with symptomatic relief in urticaria, may be evidence of the relationship between the degree of inflammation in thyroid and presence of urticaria.
Keywords: Autoimmune thyroiditis, Hashimoto′s thyroiditis, neopterine, urticaria

Chronic urticaria and/or angioedema (CUA) is a common problem and negatively affects both work and social life because of its chronic relapsing course and poor response to therapy. Today, we know that up to 50% of CUA may be autoimmune. [1] There is a wide spectrum of autoimmune disorders associated with CUA. Autoimmune thyroiditis (AT) is one of them. The association between CUA and AT is well established. Several studies on this topic have been published since 1983. [1],[2],[3],[4],[5],[6]

Thyroid hormone replacement therapy, which was first published by Leznoff et al., [2] was found to be effective to improve urticaria, however the underlying immunologic mechanisms of benefit are still unclear. Suppression of thyroid functions with levothyroxine may provide a long-lasting urticaria-free period in many of the patients. [7]

On the other hand, not all patients with AT demonstrate urticaria. In which patients urticaria becomes a problem is still not obvious. One possible explanation is the degree of inflammation. Inflammation in thyroid may be more severe in patients with CUA associated with AT. A marker which positively correlates with inflammation may demonstrate this suggestion.

The study was designed as an open study and approved by the local ethical committee. All patients were informed about the study protocol and the effects and side-effects of the drug, and their written consents were obtained.

Study protocol and patient selection: Patients with AT with and without CUA, who were evaluated at the Allergy and Endocrinology outpatient clinics, were included in this prospective study.

Diagnosis of AT was made according to textbook data:

Patients were divided into two subgroups and observed during a study period of 6 weeks (January 2005 to May 2005):

Group 1 consisted of patients with AT and CUA. CUA was defined as recurrent episodes of hives with or without angioedema of at least six-week duration, according to current literature. [10] Etiological factors of CUA other than AT were evaluated by medical history, physical examination and laboratory tests. After a thorough physical examination, laboratory investigations including complete blood count, erythrocyte sedimentation rate, urine and stool microscopy, peripheral blood smear, serum total eosinophil count, serum biochemistry, complement levels, C-reactive protein, rheumatoid factor, HbsAg, anti HCV, antinuclear antibody, anti-double stranded DNA, chest and sinus X-rays and allergy tests with food and inhalant allergens were done. In addition, Helicobacter pylori infection was investigated in those patients with chronic gastric complaints. At the end of the investigations, patients who were positive for any etiological factor that may cause CUA were excluded; the remaining 27 patients with CUA associated with AT were included in the study.

Group 2 consisted of patients with AT without CUA. Patients in this group were also screened for inflammatory or infectious diseases or the use of medicines that could interfere with NP results. Twenty-eight patients were included.

All exclusion criteria are listed below:

Patients were warned about the importance of daily blood pressure and pulse rate recording during levothyroxine treatment and questioned via phone visits concerning whether an unexpected effect occurred.

Symptom scores in patients with urticaria: The number, duration and proportions of urticaria lesions (plaques), frequency of urticaria attacks and intensity of itching were scored from 0 to 3 (0 = no complaint, 3 = the most bothersome complaints). [11]

Neopterine measurements: Neopterine level was determined in both groups, at baseline and after levothyroxine treatment. A convenient volume of early-morning urine was collected in plastic tubes covered with tin foil. Then, the evaluation samples were stored at -80°C. Urinary NP concentration was measured with an HPLC device (Hewlett Packard 1050; Hewlett Packard, Palo Alto, CA, USA) using a fluorometry detector, as defined by Alrashed et al. [12] A 0.100 mL volume of urine was mixed with 1 mL of mobile phase and injected into a 4 Χ 125 mm C18 reversed phase column; NP was measured by fluorescence from excitation wave length of 353 nm and emission wavelength of 438 nm. Creatinine levels were determined by an ultraviolet detector from absorption at 235 nm. The results were calculated as μmol neopterin/mol creatinine.

Statistical analyses were performed by microprocessor using statistical software package (SPSS for windows, SPSS Inc., USA). Mann-Whitney U test and Wilcoxon Signed Ranks test were used to analyze the differences between the groups and to compare pre- and post-treatment results, respectively. All data in the text were expressed as median. A P value <0.05 was accepted as significant.

Study design is summarized in [Figure - 1].

Urine NP levels were significantly higher in Group 1 than Group 2 before the levothyroxine treatment (P=0.012) [Figure - 2].

Post-treatment NP levels decreased in both groups. The decrease in Group 1 was statistically significant (P=0.015) [Figure - 3]. The reduction in NP levels was parallel to the remission of CUA. Patients benefited from levothyroxine treatment, as expected, as described in the literature at several times. [3],[4],[7] In contrast, the decrease in NP levels was not significant in Group 2, (P=0.282) [Figure - 4].

The difference of post-treatment NP levels between the groups was insignificant (P=0.091) [Figure - 5]. Results are summarized in [Table - 1]. 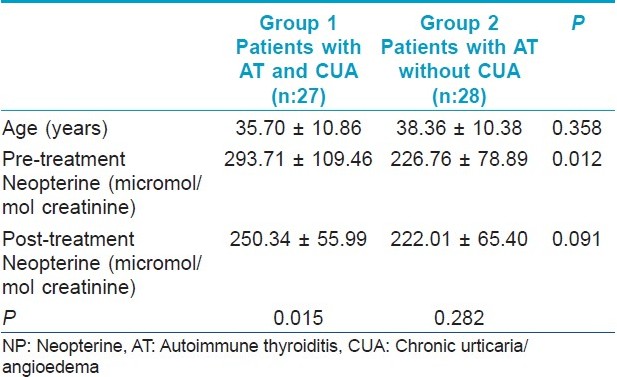 Table 1: Comparison of the groups with respect to age and pre- and post-treatment neopterine levels

Chronic urticaria is an intensely pruritic, circumscribed, raised, erythematous plaque, often with central pallor and it usually occurs on most days of the week, lasting for a duration of longer than six weeks. It is a common disorder; the lifetime prevalence for any subtype of urticaria is approximately 20%. [10] In many patients with chronic urticaria, no definitive cause can be identified. In such cases, autoimmunity should be mentioned. The presence of mast cell stimulatory serum factors, which cause histamine release, is demonstrated with the autologous serum skin test (ASST), and an autoimmune pathogenic mechanism of chronic urticaria has been suggested. [5],[10],[13],[14]

Anti-thyroid antibodies may be positive in patients with chronic urticaria and reversely, urticaria can be seen in patients with Hashimoto′s thyroiditis. It is hypothesized that anti-thyroid antibodies are mast cell-stimulating autoantibodies that bind to either immunoglobulin E (IgE) or to the alpha subunit of the IgE receptor. In this way, the two diseases are associated closely. On the other hand, some studies suggest that chronic urticaria and Hashimoto′s thyroiditis are different clinical presentations of a shared autoimmune process. [18],[19],[20]

Patients with CUA with thyroid autoantibodies may benefit from thyroid hormone replacement therapy. [3],[4],[7],[17],[21] Improvement of urticaria after thyroid hormone replacement may signify the importance of inflammation in the pathogenesis of urticaria. However, not all patients with Hashimoto′s thyroiditis display urticaria. It may be speculated that inflammation in thyroid may be more severe in AT associated with urticaria. A marker that positively correlates with inflammation may demonstrate this suggestion; however, there is no specific marker.

NP, an acute-phase reactant, is a sensitive reflector of monocytes-macrophage activation. NP levels are positively correlated with the severity of inflammation. [22],[23] It is expressed by monocytes-macrophages after interferon-gamma stimulation. Thus, NP was used for diagnosing and following up inflammatory disorders, for example, in HIV infections [24] or in severe acute respiratory syndrome. [25] NP can be measured in both serum and urine, and the results are similar. However, since NP clearances from kidney exist in indestructible form, urine NP levels are directly observed as the produced amounts of NP. [9] Measurement of NP is possible by high-performance liquid chromatography (HPLC), enzyme-linked immunosorbant assays (ELISA) or by radioimmunoassay (RIA).

In our patients with AT and CUA, higher pre-treatment NP levels may be indicative of more severe inflammation in their thyroid glands. After suppression with levothyroxine, NP levels reduced significantly. In addition, although regular antihistamine treatment was not given, CUA symptoms remitted along with the lessening of NP levels. In Group 2 which consisted of patients with AT without CUA, pre-treatment NP levels were low and the post-treatment reduction in levels was insignificant. These results can be interpreted as indicating that the degree of inflammation in the thyroid gland may be a determinant of the presence of urticaria. In other words, urticaria in AT may be directly related to the thyroid gland itself.

Because NP is not a specific marker for thyroid inflammation, an alternative opinion can also be suggested: Could elevated levels of NP be directly related to CUA itself, rather than the thyroid gland? Theoretically, it is possible. However, alteration in NP levels is most likely the consequence of changes in the thyroid gland due to levothyroxine. Most of the previously published studies agree with it, and reveal that healing of CUA symptoms occurs following the suppression of the endogenous thyroid hormones, thyroid-stimulating hormone, and pro-inflammatory mediators by levothyroxine treatment. [4],[7],[26],[27],[28] Indeed, symptomatic relief in urticaria cannot be obtained before levothyroxine achieves its effective plasma concentration. Furthermore, though insignificant, NP levels also decreased in patients with AT without urticaria.

Despite some limitations of the study protocol, our results have signified that patients with AT can experience CUA if the inflammation is severe in their thyroid gland. NP is a sensitive marker, but not specific to thyroid. Studying with a thyroid-specific inflammation marker can yield more accurate results.