Methotrexate is the most effective systemic agent in psoriasis and has been used by dermatologists for more than 50 years. Despite being a relatively safe drug, its use has been limited in view of its most dreaded complication-"hepatotoxicity." Various guidelines have been formulated in various countries for prescribing methotrexate, but there is no consensus statement on this issue. When deciding the treatment option for an individual case, many questions arise regarding the dosage, risk of liver damage, how to monitor for hepatotoxicity, and when to do liver biopsy.

What are Indications for Starting Any Patient on Methotrexate?

What are the Common Adverse Effects of Methotrexate?

Gastrointestinal symptoms such as nausea (8%) and anorexia are the most commonly seen early adverse reactions to methotrexate. Other side effects are abnormal liver function tests (LFTs) (25%), hematological (11%), teratogenic, abortifacient, and pulmonary (1%). [2]

Are Psoriatic Patients More Predisposed to Develop Hepatotoxicity When Compared with Other Patients on Methotrexate?

A study conducted in UK between patients of PsA and rheumatoid arthritis (RA) on methotrexate showed that the most prevalent adverse effect in the PsA group was hepatic damage, whereas in RA it was gastrointestinal problems. [3] Hepatic injury was observed in both groups, but there was increased risk of progressive liver disease in PsA subjects than RA patients. This study also showed that PsA patients with history of alcohol consumption had the highest elevation in liver enzymes in comparison to RA patients with alcohol intake. Genetic predisposition to hepatic damage in PsA may be responsible for this apparent anomaly.

Non-alcoholic fatty liver disease (NAFLD) encompasses conditions ranging from simple fatty liver, to non-alcoholic steatohepatitis (NASH), which can finally give rise to fibrosis and cirrhosis. NAFLD is mainly due to an underlying insulin-resistant state which is a feature of the metabolic syndrome. As metabolic syndrome is found to be associated with both psoriasis and NAFLD, it is likely that both entities could coexist in the same patient. [4] It is found that psoriatic patients with NAFLD are more likely to develop progressive liver disease such as NASH and fibrosis.

An increase in the visceral adipose tissue seen in psoriatic patients results in the release of multiple factors such as free fatty acids, hormones, and adipocytokines which in turn lead to the development of inflammation, insulin resistance, and NAFLD. [5]

NAFLD as such can also cause the release of mediators such as reactive oxygen species (ROS), C-reactive protein, interleukin (IL)-6, and other proinflammatory cytokines from the liver which in turn contribute to the severity of psoriasis.

It is seen that free fatty acid accumulation in the liver triggers the production of tumor necrosis factor alpha (TNF α) which further leads to the generation of ROS; these increased levels of ROS are the actual culprits responsible for the progressive liver damage. [5] It is still unknown whether the site of TNF α production is actually from the hepatocytes or from keratinocytes and inflammatory cells.

Does Methotrexate Cause Hepatotoxicity in Psoriatic Patients?

Long-term low-dose methotrexate therapy is well known to cause liver damage which can range from simple elevation of liver enzymes to fatty liver, fibrosis, and lastly cirrhosis. Recently, it has been found out that methotrexate-induced liver damage is clinically and histopathologically similar to NAFLD, and there is a greater risk of progression to NASH with higher cumulative doses or in the presence of risk factors. [5],[6] But methotrexate can be used safely and effectively for long-term treatment if patients are selected carefully and monitored regularly for progression to liver fibrosis and cirrhosis which are neither frequent nor severe. [2] After cessation of methotrexate, these hepatic dysfunctions if detected are not progressive and do not significantly impair quality of life.

What are the Risk Factors Associated with Progressive Liver Damage?

These are history of significant lifetime alcohol consumption (past or current use of >1-2 drinks per day), persistently abnormal LFTs, inherited or acquired liver disease including chronic hepatitis B or C, obesity, diabetes mellitus, exposure to hepatotoxic drugs or chemicals, hyperlipedemia, and lack of folate supplementation. [7]

Hence, it is advisable not to start any patient on methotrexate with any of the mentioned risk factors as they are more prone to develop early hepatic dysfunction.

What are the Recommended Dosage/Regimens with Good Efficacy and Least Toxicity?

The recommended starting dose is 5-10 mg/week following which a therapeutic dose of 15-25 mg/week can be reached. The maximum dose of methotrexate should not exceed 25 mg/week. [8] Divided doses of methotrexate are associated with a greater risk of hepatic fibrosis. [9] But this split dosing or administering the drug subcutaneously or intramuscularly improves bioavailability and efficacy. [10]

How Does Folic Acid Supplementation Help?

Although many experts doubted the usefulness of adding folate, evidence shows reduction in hematologic, gastrointestinal (nausea and vomiting) side effects with folate supplementation, and also it prevents increase in liver enzymes without decreasing the efficacy. [11] Options for folate supplementation include folic acid 1 mg daily or 5 mg for three doses every 12 hours, once weekly, with the first dose given 12 hours after the dose of methotrexate. [11]

Some studies have shown that a patient who has an abnormal liver biopsy may with time experience a reversal of findings while off methotrexate therapy. [12],[13] Thus, it may be possible to resume therapy after rotational therapy with another agent. Single elevation of liver enzymes should devise caution but not an indication to never use methotrexate again in that patient.

Are Liver Biopsies Required for Monitoring Liver Functions in any Patient on Methotrexate?

Unfortunately, we lack a safe and effective screening tool for liver fibrosis that eliminates or, at the very least, decreases the need for liver biopsies. American Academy of Dermatologists (AAD) consider liver biopsy as gold standard, whereas dermatologists from Britain and Europe are of the opinion that PIIINP can be used instead of invasive procedures such as liver biopsy. According to AAD guidelines, [11] there is no indication for a baseline liver biopsy before starting any patient on methotrexate. Patients can be monitored according to the presence or absence of risk factors.

In patients having low risk of developing hepatotoxicity, LFTs should be done monthly for the first 6 months and every 2-3 months thereafter, and the results of these tests should be worked up as mentioned in [Table - 1]. 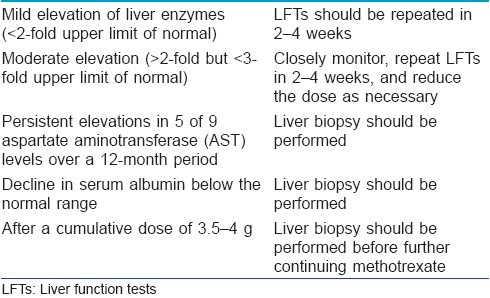 Table 1: Monitoring of liver enzymes and other liver function tests during methotrexate therapy

In patients having risk factors for developing liver damage as mentioned above, in such cases, patient should not be started on methotrexate therapy as far as possible, and if started a delayed baseline liver biopsy should be performed after 2-3 months. If biopsy findings permit continuation of therapy, then biopsies should be performed after every 1-1.5 g cumulative doses of methotrexate.

According to the MANCHESTER guidelines [14] for monitoring methotrexate long-term toxicity, baseline assays of amino terminal of procollagen III (PIIINP) level should be performed before starting methotrexate wherever possible and should be repeated every 2-3 months while on therapy. Liver biopsy is indicated if either of the situations occur that is a pretreatment PIIINP >8.0 μg/L, three abnormal PIIINP levels (>4.2 μg/L) over a 12-month period and lastly if there are elevated PIIINP levels above 8.0 μg/L in two consecutive samples.

The Psoriasis Task Force developed the Roenigk classification for monitoring of methotrexate-induced liver injury; however, this scale has never been validated or used in the evaluation of any other liver disease as it is very subjective and insensitive to small changes, particularly when assessing fibrosis. This scale classifies all the patients with more than minimal fibrosis as advanced fibrosis (grade 3b), and hence overestimates the degree of histological change. [15] This could have been the reason for the initial reports of methotrexate being associated with high frequency of advanced fibrosis.

As such interpretation of liver biopsies vary between histologists, their experience in reporting liver biopsies, sample size, sample selection, and scoring system used. Sampling errors are very common as the samples are very small and not representative as methotrexate-related hepatotoxicity is not homogenous. [10]

Do we Have Any Non-Invasive Tests Available for Monitoring Liver Damage?

A variety of non-invasive tests such as real-time fibroelastography, microbubbles, and magnetic resonance imaging are being tried. Recently, many direct and indirect markers of liver function have come up for the monitoring. [10],[16] Indirect markers include aspartate aminotransferase (AST), alanine aminotransferase (ALT), γ glutamyltranspeptidase, hyaluronic acid, apolipoprotein A1, bilirubin, haptogloblin, cholesterol, platelets, and prothrombin time. Direct markers of liver function include collagen IV, collagen VI, tissue inhibitor of metalloproteinase-1 (TIMP-1), laminin, human cartilage glycoprotein 39, tenascin, undulin, matrix metalloproteinase-2 (MMP-2), and amino terminal of procollagen III peptide (PIIINP). Out of all the above, PIIINP is emerging as a promising tool, as it correlates well with the progression of liver disease as is presently being used in Europe as a diagnostic tool over liver biopsies.

How Valid are PIIINP Assays?

PIIINP levels are actually more clinically significant than histological findings on liver biopsy specimens, in that they reflect hepatic fibrosis that is ongoing and more likely to be irreversible, rather than more minor degrees of focal non-progressive fibrosis. It is important to remember that PIIINP levels tend to reflect ongoing hepatic fibrosis and may become normal in an already damaged liver where the fibrotic process is no longer active. [17] It is not certain whether routine baseline biopsies may be omitted if serial PIIINP assays are being performed routinely. As a persistently elevated PIIINP levels reflects an ongoing fibrosis, a liver biopsy may be imminent in such case. If PIIINP levels are normal, one could at least conclude that the fibrosis is unlikely to be progressive.

Hence, we conclude that the frequency of development of advanced hepatic fibrosis on methotrexate therapy for psoriasis is small in low-risk subjects and methotrexate alone is not responsible for the progressive liver disease. Psoriatic patients are inherently predisposed to develop NAFLD and more so in the presence of risk factors and hence all patients should be screened for risk factors and the presence of NAFLD prior to starting therapy. Intensive monitoring with serial liver biopsies, as recommended by the published guidelines, should be reviewed. PIIINP levels can offer a useful alternative in the monitoring, but to make more definitive recommendations about the use of the PIIINP assay in substituting for liver biopsy in patients on long-term methotrexate requires further studies.