The present study is an audit of patients with subepidermal autoimmune bullous diseases registered in the Immunobullous Disease Clinic of Postgraduate Institute of Medical Education and Research, Chandigarh seen over a period of 1 year (November 2013 to November 2014). Patients were diagnosed based on a combination of clinical, histopathological and direct immunofluorescence findings according to the criteria detailed for each subepidermal autoimmune bullous disease in [Table - 1]. Demographic details, clinical presentation, associated systemic diseases, histopathology, direct immunofluorescence findings and treatment administered were retrieved from the predesigned proforma of the Immunobullous Disease Clinic. Clinically suspected cases of subepidermal autoimmune bullous diseases with non-specific histopathology and/or negative direct immunofluorescence results were labeled as indeterminate. 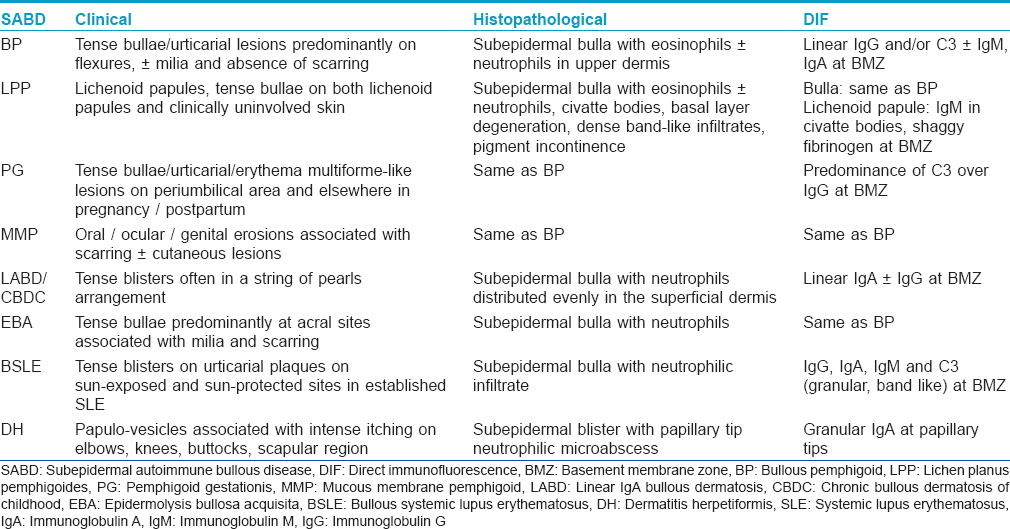 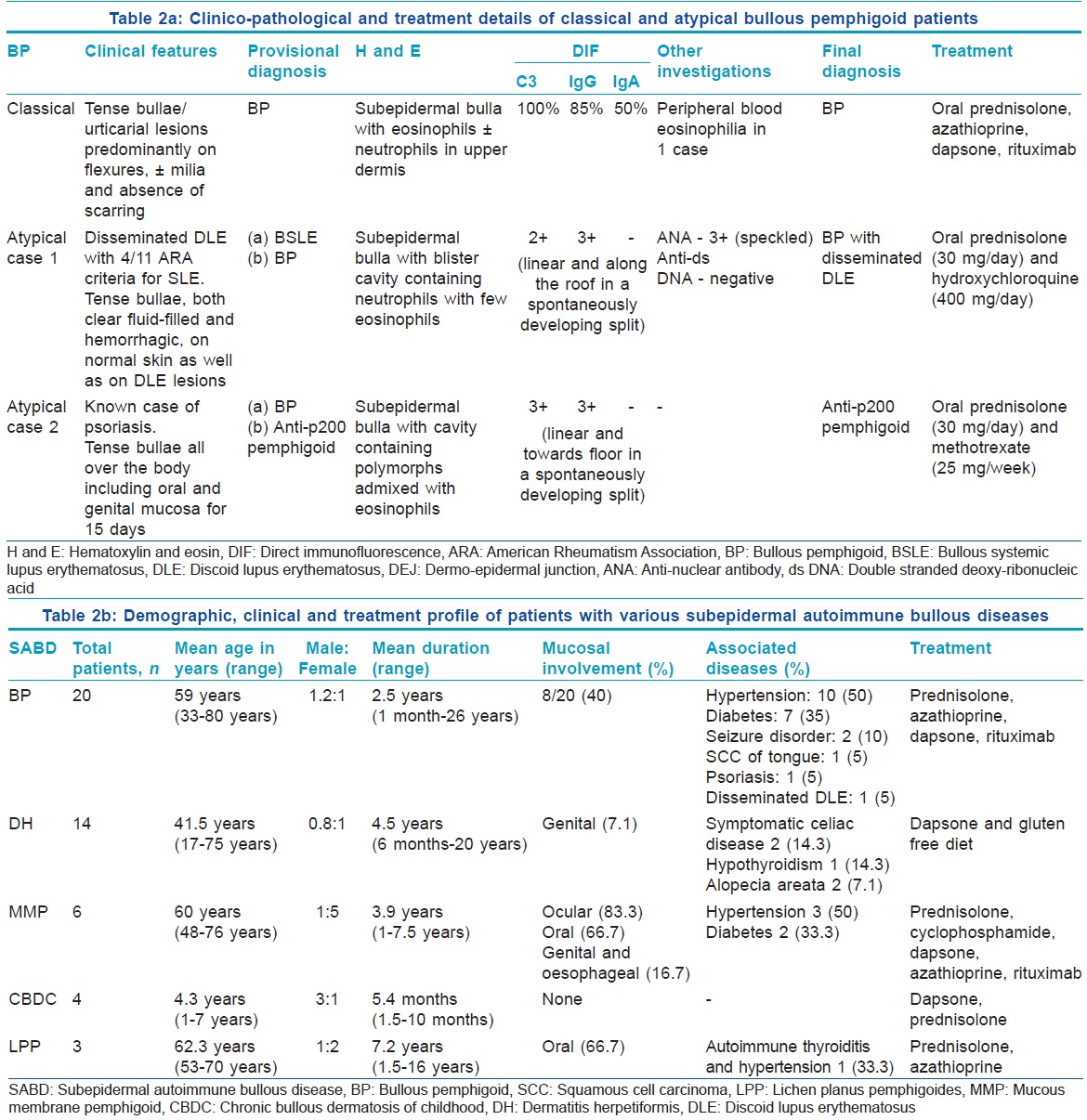 There is a paucity of demographic and clinicopathological studies on different subepidermal autoimmune bullous diseases from India. The present study describes the demographic and clinico-pathological features of various subepidermal autoimmune bullous diseases observed in a clinic setting and their comparison with other countries [Table - 4]. Bullous pemphigoid was the most common subepidermal autoimmune bullous disease which is in accordance with studies from Kuwait, France, Germany and Singapore.[1],[2],[3],[4] However, the proportion of bullous pemphigoid cases was lower compared to that in European countries and Singapore.[2],[3],[4] The mean age at diagnosis was 59 years which was similar to that from Singapore (58.4 years) and slightly lower than that reported by Nanda et al. (65.97 years).[1],[5] On the other hand, studies from Europe have documented a much higher mean age at diagnosis (73.7 and 82.4 years).[2],[3] We observed almost equal gender distribution similar to that reported from Germany and Singapore, while female preponderance was noted in Kuwait (1:6) and France (1:1.5).[1],[2],[3],[5] Majority of our patients (65%) had mild disease, unlike moderate to severe disease reported in 96% of cases from Kuwait.[6] The incidence of mucosal involvement was 40% in the present study which is almost similar to that described from Kuwait (37%), but significantly higher compared to France and Taiwan (24.6% and 12.8%, respectively).[2],[6],[7] We had one patient with a provisional diagnosis of anti-p200 pemphigoid that was associated with psoriasis. A confirmed diagnosis was not possible due to lack of indirect immunofluorescence and immunoblotting facilities. Anti-p200 pemphigoid is a rare subepidermal autoimmune bullous disease that may clinically resemble bullous pemphigoid, linear immunoglobulin A bullous dermatosis, dermatitis herpetiformis or pemphigus herpetiformis and histopathologically shows subepidermal bulla with a collection of neutrophils in the papillary dermis. Indirect immunofluorescence on salt-split skin demonstrates autoantibodies binding along the dermal side of the split. Anti-p200 pemphigoid sera react to laminin γ1 on Western blotting in 90% of patients. Psoriasis has been associated in 30% of these cases.[8] Two of our patients had a seizure disorder. An Indian patient having dyshidrosiform bullous pemphigoid associated with parkinsonism has been described.[9] It has been suggested that bullous pemphigoid antigen-1n (neuronal isoform) gets unmasked in the setting of a neurodegenerative disease resulting in antibodies that cross-react with the epithelial form of bullous pemphigoid antigen-1e. Langan et al. reported the development of bullous pemphigoid in 21% of cases with neurological complaints such as stroke, dementia, parkinsonism, epilepsy and multiple sclerosis.[10] A single case of malignancy (squamous cell carcinoma of the tongue) associated with bullous pemphigoid was seen in our study. Fernandes et al. from India reported squamous cell carcinoma of the tongue with lymph node metastasis in a patient of bullous pemphigoid whose disease course paralleled that of malignancy.[11] Chang et al. from Taiwan found internal malignancy in 15.1% of their cases of bullous pemphigoid but the association was not statistically significant when compared with age and gender matched controls.[7] Patients refractory to standard therapies should be evaluated for underlying malignancy. In our study, hypertension (80%) and diabetes (35%) were the most commonly encountered systemic diseases, much higher than the rates from Singapore (21.6% and 14% respectively).[5] An age and gender matched control group should be studied to determine any significant association of bullous pemphigoid with these diseases which are otherwise common in the older population. C3 was the most frequent immunoreactant at the dermoepidermal junction followed by immunoglobulin G and immunoglobulin A in our bullous pemphigoid patients. This is in accordance with the study from Singapore which found C3 (87.8%) followed by immunoglobulin G (51.5%) as the most common reactants. In 29.7% of cases, C3 alone was detected in the absence of immunoglobulins and in 8.1%, direct immunofluorescence was negative.[5] Inchara and Rajalakshmi from India reported the sensitivity of direct immunofluorescence to be 82% (23/28) in bullous pemphigoid among a study on 100 patients of immunobullous diseases.[12] Another Indian study evaluated the role of salt-split skin as a substrate for direct and indirect immunofluorescence in 32 histopathologically confirmed cases of bullous pemphigoid. They observed equal sensitivity of direct immunofluorescence on the non salt-split skin and salt-split skin though additional immunoreactants were identified in some cases with salt-split skin. On the contrary, salt-split skin was twice as sensitive as non- salt-split skin for indirect immunofluorescence.[13] The incidence of peripheral blood eosinophilia was low (5%) in our study, in contrast to 22.1% observed in Taiwan.[7]

Table 4: Comparison of proportion of subepidermal autoimmune bullous diseases in our study with other studies

In the present study, dermatitis herpetiformis was the second most common subepidermal autoimmune bullous disease accounting for 28% of the cases. This was in striking contrast to the studies from Kuwait and Singapore where none of the patients had dermatitis herpetiformis.[1],[4] This may possibly be due to differences in the human leukocyte antigen patterns in various ethnic groups. Furthermore, our results cannot be compared with those from Europe as they had excluded dermatitis herpetiformis among subepidermal autoimmune bullous diseases.[2],[3] The mean age of our patients was 41.5 years which was slightly younger than that reported in a clinico-immunopathologic study of 264 dermatitis herpetiformis patients registered at Mayo Clinic (1970–1996).[14] We observed slight female dominance, in contrast to male dominance in the Mayo Clinic study.[14] Autoimmune hypothyroidism and symptomatic celiac disease were seen in 14.3% cases each. This was comparable to the series from Mayo Clinic where celiac disease was present in 12.6% and autoimmune systemic diseases in 22.2% patients (thyroid disorders in 11.1% patients).[14]

Mucous membrane pemphigoid accounted for 12% of subepidermal autoimmune bullous diseases. This was comparable to that reported from France and Germany (12% and 10%, respectively) where mucous membrane pemphigoid is the second most frequent subepidermal autoimmune bullous disease after bullous pemphigoid.[2],[3] In contrast to this, only 1.5% cases of mucous membrane pemphigoid were reported from Kuwait and none from Singapore.[1],[4] In the present study, mean age of the patients was 60 years, a slightly lower figure when compared to that described from Europe (69 and 73 years).[2],[3] The female preponderance in our study was similar to that observed in Germany (1:7), although in the French study, males were more frequently affected (1:0.3).[2],[3] We found ocular mucosa to be most frequently affected followed by oral, genital and esophageal mucosa. A study from Mayo Clinic on 81 patients of mucous membrane pemphigoid reported oral lesions in 84%, ocular in 76.5%, genital in 29.6% and esophageal in 7.4% patients.[15] In our study, hypertension and diabetes mellitus were present in 50% and 33.3% patients, respectively and malignancy in none. On the other hand, at Mayo Clinic, malignancy was observed in 14.8% cases though the association was not significant. Diabetes and hypertension were observed in 4.9% cases each.[15]

Although lichen planus pemphigoides was earlier thought to be an expression of coexisting lichen planus and bullous pemphigoid, it is now regarded as a distinct entity. Compared to bullous pemphigoid, it affects a younger age group, has a tendency to involve the lower extremities and has a less severe course. In the present study, lichen planus pemphigoides contributed to 6% of the total subepidermal autoimmune bullous diseases. Studies from France, Germany and Singapore did not observe any case of lichen planus pemphigoides.[2],[3],[4] Although mostly idiopathic, lichen planus pemphigoides may be associated with drug intake, phototherapy, hepatitis B/C and internal malignancy. One of our patients had autoimmune hypothyroidism. On histopathology, we found civatte bodies in all three patients while Zaraa et al. described civatte bodies in 16.7% and fibrin in 11.5% patients.[16] The other subepidermal autoimmune bullous diseases (pemphigoid gestationis, epidermolysis bullosa acquisita and bullous systemic lupus erythematosus) were uncommon as observed in similar studies from elsewhere. The limitations of our study were that we could not perform immunofluorescence on salt-split skin and immunoblot analysis which would have helped in further characterization of cases that could not be diagnosed based on histopathology and direct immunofluorescence alone and would have prevented any possible misclassification of the remaining cases.