Two hundred patients (112 males and 88 females) with cutaneous drug eruption were studied. The aim was to recognize the offending drug, to evaluate mortality and morbidity, educate the patient and avoid self-administration and readministration of drugs. Fixed drug eruption was the commonest reaction, seen in 61 patients; other reactions being urticaria and angioedema, morbilliform rash in 37, pruritus in 25, Stevens Johnson Syndrome (SJS) in 6, purpura in 6, exfoliative dermatitis in 5, photosensitivity in 5, toxic epidermal necrolysis in 2, acneiform eruption in 3, erythema multiforme in 2. Maximum patients belonged to the age group 41-50, followed by 21-30 and 31-40 years. The youngest was 1 year old and the oldest was 80 years old. Period of development of lesion after intake of drug varied from 1 day to 45 days. Cotrimoxazole was the commonest drug, in 26 cases; followed by Ibuprofen in 20 cases.
Keywords: Adverse drug reaction, Cutaneous drug eruption 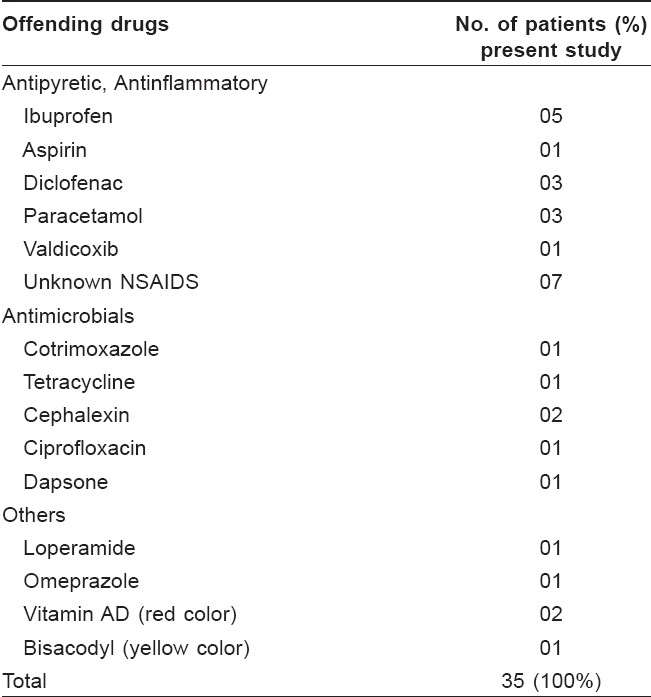 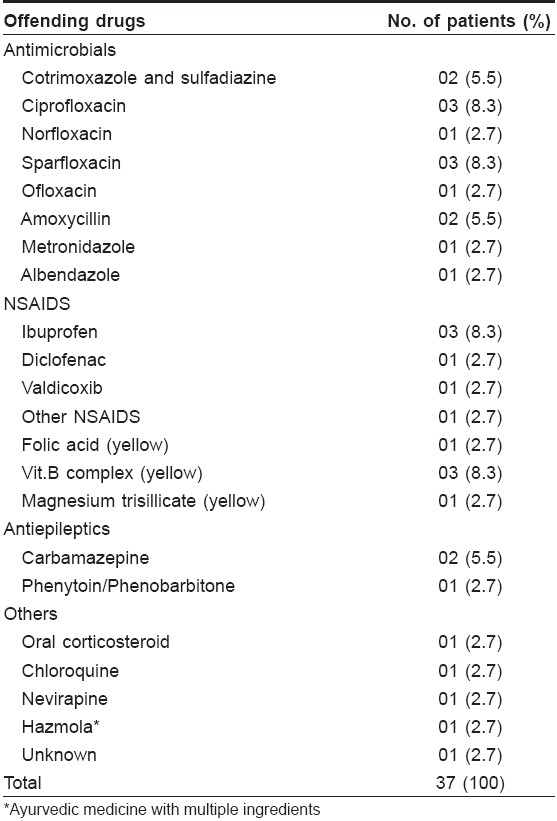 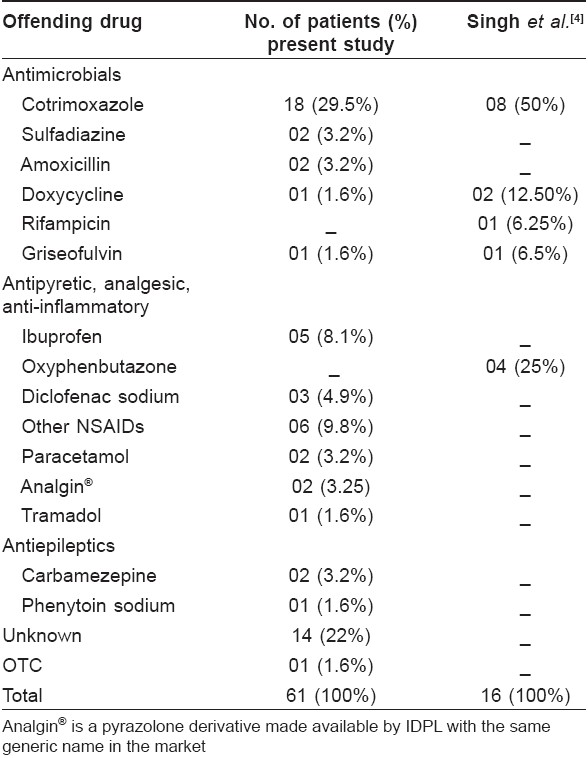 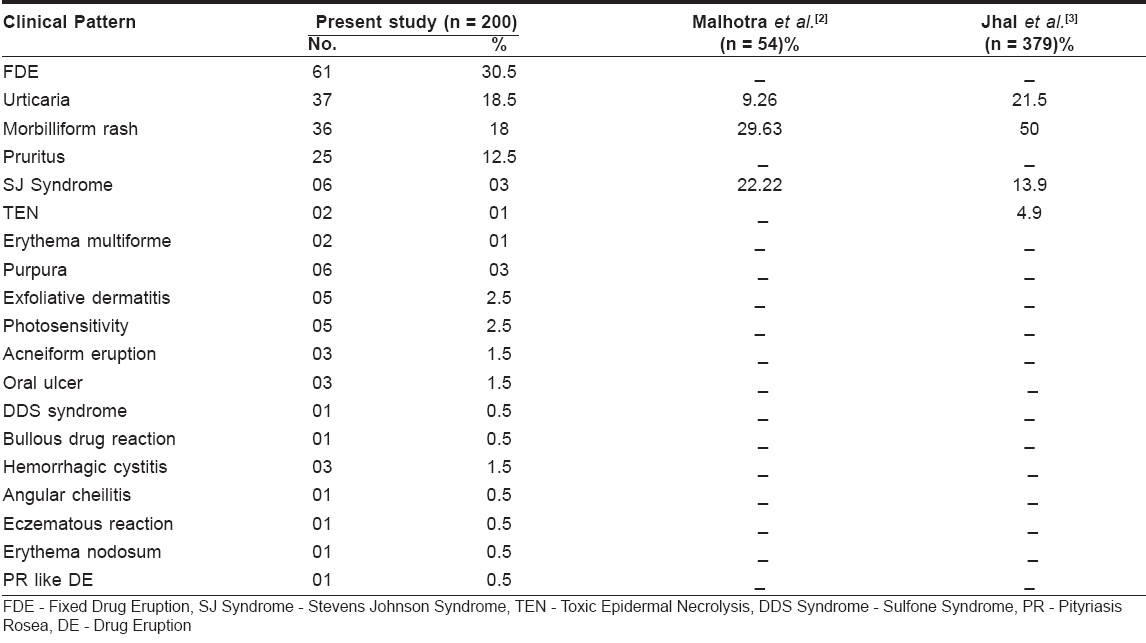 Table 2: Clinical pattern of drug eruption in the present study

Table 2: Clinical pattern of drug eruption in the present study 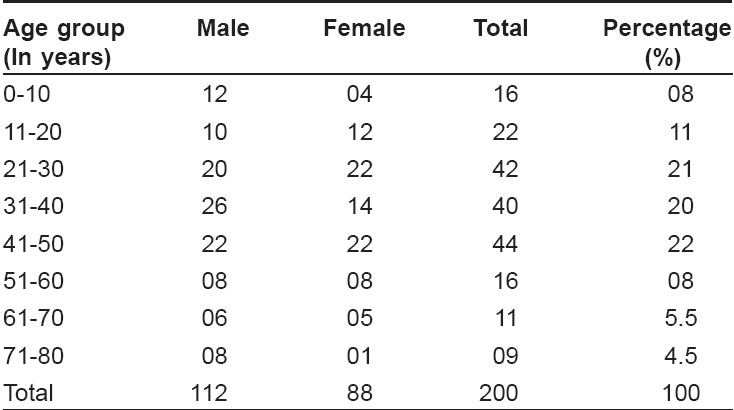 Table 1: Age and sex distribution of drug eruption in the present study

Table 1: Age and sex distribution of drug eruption in the present study

Cutaneous drug eruptions are the most common adverse reactions attributed to drugs. Any skin disorder can be imitated, induced or aggravated by drugs. The present study was carried out to know the age, sex incidence and clinical pattern of drug reactions, to recognize the offending drug (self-medication or prescribed), to evaluate mortality and morbidity associated with drugs, to educate the patients, to avoid self-administration of drugs and readministration of offending drugs. The diagnosis of cutaneous drug eruptions is based on detailed history and correlation between drug intake and the onset of rash. The history-taking for drug intake is an art, which includes direct, indirect, suggestive, evocative and repetitive questioning. It takes time, but answers are golden in case of cutaneous drug reactions and drug-induced dermatitis.

A prospective study comprising of 200 cases of drug reaction was carried out from July 1997 to June 2006. The diagnosis was based on detailed history and clinical examination.

Patients with cutaneous drug reactions attending Skin-V.D. Department, SSG Hospital, Vadodara, were studied. Precise history of drug ingestion, including allopathic, homeopathic, herbal remedies, and self-medication was taken. Careful history of symptoms, other existing skin and systemic diseases, atopy, and past history, family history of drug reaction or any other illness were taken. Thorough clinical examination was carried out. Skin, hair, nail and mucosa (eye, oral and genital) were examined.

The diagnosis of cutaneous drug reaction was based on history of drug ingestion, clinical findings and exclusion of other similar disorders. Diagnosis was confirmed by observing disappearance of signs and symptoms after discontinuation of drugs. Re-challenge was done as and when possible in less severe types of reactions.

Two hundred patients (112 males and 88 females) were studied. Maximum patients belonged to the age group of 41-50 years, followed by 21-30 and 31-40 years [Table - 1]. The youngest patient was 1 year old and the oldest was of 80 years old. Period of development of lesions after intake of drug varied from 1 day to 45 days.

Cotrimoxazole was the most implicated drug, in 26 cases; followed by Ibuprofen in 20 cases. The commonest pattern of cutaneous drug reaction observed was FDE (Fixed Drug Eruption) (30.5%), followed by urticaria in 18.5%, morbilliform rash in 18% and pruritus in 12.5% [Table - 2].

FDE [Table - 3] occurred most commonly due to cotrimoxazole (29.5%), followed by NSAIDs (nonsteroidal anti-inflammatory drugs) in 22.8%, urticaria in 18.5%, morbilliform rash in 18% [Table - 4] and pruritus in 12.5%. NSAIDs were also the main culprit in causing urticaria, angioedema [Table - 5] and morbilliform rash.

Twenty-five cases presented with pruritus, out of which two were because of antituberculous therapy [isoniazid (INH), rifampicin, pyrazinamide, ethambutol] and three were due to cotrimoxazole. Others were due to drugs like ampicillin, ibuprofen, APC (aspirin, paracetamol and codeine), hydroxyzine hydrochloride, vitamin A and chloroquine.

There were seven cases of SJS, out of which three (42.8%) were due to ibuprofen. Two cases of SJS were severe, but they were managed successfully with intensive care. In addition to this, there were two cases of TEN (Toxic epidermal necrolysis), out of which one case due to rifampicin was severe but responded well to treatment and one case of TEN because of unknown drug proved fatal.

Photosensitivity was seen in four cases, mainly due to ciprofloxacin and sparfloxacin. Five cases of exfoliative dermatitis (2.5%) occurring due to carbamazepine (two), ibuprofen and NSAIDs and dapsone were seen. There were four cases of purpura, the culprit drugs being aspirin, chloroquine, griseofulvin and an unknown drug. One case of angular cheilitis presented due to isotretinoin.

Other than cutaneous drug reactions, we had three cases of hemorrhagic cystitis and one case of aplastic anemia due to cyclophosphamide.

Re-challenge was done in 40 cases of mild cutaneous drug reaction, out of which positive results were found in 29 cases.

Patients were given a list of common drugs causing particular types of reactions and advised to avoid these drugs, chemically related drugs and OTC (over-the-counter) products.

They were instructed that even ayurvedic and other alternative medicines can cause adverse drug reactions. Even their family members were advised to avoid particular groups of drugs.

Additives and preservatives are common causes of urticaria. The exact percentage of reactions to additives is not known but is considered to be important in fewer than 10% of patients with chronic urticaria. Most frequently implicated food additives are tartrazine, other azo-dyes including amaranth and sunset yellow. [7]

One case of sulfone syndrome (DDS Syndrome - exfoliative dermatitis, fever, generalized lymphadenopathy and raised LFT) [Figure - 4] was observed in our study, while dapsone (sulfone) syndrome was observed in 10 (1.6%) out of 604 patients over a period of 4 years in the study by Prasad PV. [8]

Quinolones were a common cause of morbilliform rash and photosensitivity in our study, which might be because of increased use of quinolones.

One case of pruritus was probably induced by (1%) hydroxyzine hydrochloride.

Every drug must be regarded as potentially hazardous. For each patient, the risk must be weighed against the expected therapeutic benefit.