Acute generalized exanthematous pustulosis (AGEP) is a severe cutaneous adverse drug reaction, which presents with rapid onset of numerous sterile non-follicular pustules on edematous erythema, accompanied with fever and neutrophilia.[1] AGEP is primarily associated with drug use, mainly antibiotics and antifungal agents.[2] Here, we report a case of curcumin-induced AGEP. Curcumin, also called turmeric yellow, is a medicinal herb extracted from the plant Curcuma longa that has potential hepatoprotective abilities and was believed to be beneficial to our patient.

An 81-year-old woman visited the emergency department due to abrupt onset of extensive skin rashes on the trunk and limbs, accompanied by fever since 3 days. She had a history of hypertension, diabetes mellitus, was under regular entecavir treatment for hepatitis B infection and had multifocal hepatocellular carcinoma, previously treated with trans-arterial chemotherapy embolization. She reported experiencing redness of the palms and swelling, accompanied by tingling sensation since 3 days. The rashes then spread to involve bilateral upper arms, axillae, buttocks, inguinal area and right thigh with pustule formation [Figure - 1]. She had no allergies in the past and denied any previous adverse drug reaction or psoriasis history.

Physical examination showed widespread erythematous and edematous plaques with many tiny non-follicular pustules on thighs, groin, bilateral upper arms and axillae [Figure - 1]. Laboratory results revealed an elevated white blood cell count of 11800/μL and elevated eosinophil count of 1215/μL. Histological examination of skin biopsy specimen from the right arm revealed neutrophil-containing spongiform pustules in epidermis along with mixed perivascular and interstitial cellular infiltrate in the dermis [Figure - 2]. The cutaneous morphology, clinical course and histological findings were consistent with a definite diagnosis of AGEP, according to the validation score by EuroSCAR study group [Table - 1].[3] 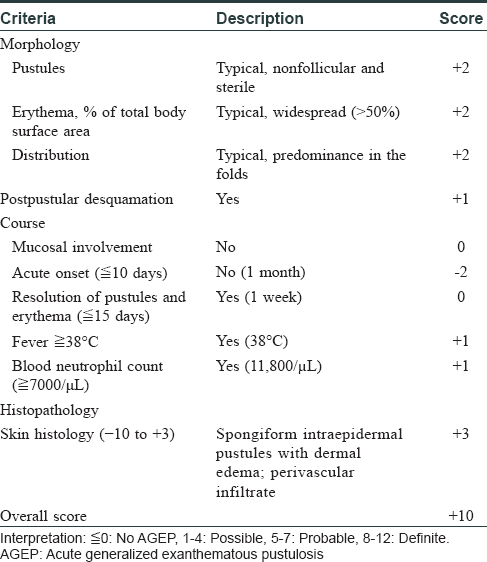 The patient denied any recent new medication except over-the-counter curcumin (1200mg per day) during the past month. Curcumin is an herb thought to benefit patients with liver disease in traditional Chinese medicine. After discontinuing the curcumin use, on the basis of a Naranjo score of 6, and initiating topical steroid therapy (Diflucortolone oint 0.1% BID), the rashes resolved with desquamation in 7 days. Patch test with curcumin, diluted to 10% and 30% in petrolatum, respectively, gave negative results on day 2 and day 4 after initial application. Nevertheless, in-vitro lymphocyte transformation test confirmed the hypersensitivity reaction to curcumin. Two drug concentration, 0.2ug/mL and 2ug/mL, were done. A positive result was defined as a 1.25-fold increase in granulysin expression compared to the tolerant controls. This cut-off value was calculated by using the values of mean and 2-fold standard deviation (SD) from the tolerant controls.

Incidence of AGEP was one to five cases per million per year and 90% of the cases were attributed to drugs, especially antibiotics. 2 The differential diagnosis includes pustular psoriasis. However, lack of previous psoriasis history, acute clinical onset and rapid resolution of skin rash after discontinuing the culprit drug suggested the diagnosis of AGEP [Table - 1]. Additionally, there was no development of psoriatic plaques during a 2-year follow-up. We further performed allergy evaluation tests to confirm our diagnosis.

Since oral provocation is dangerous for patients who have suspected severe cutaneous drug reaction, patch tests and lymphocyte transformation test are safe and useful tools that can reproduce delayed hypersensitivity to drugs.[4] In previous studies, patch testing had a 50% positive rate for those with AGEP, which may explain the false-negative result in our patient.[5] However, the lymphocyte transformation test, a test that measures the in-vitro proliferation of T cells that were previously sensitized to a drug, confirmed the hypersensitivity reaction to curcumin.[6] Also, we excluded the possibility of curcumin-induced contact dermatitis which has been reported in previous literature according to the negative result of the patch test.[7]

Curcumin, a yellow pigment extract from turmeric, is a commonly used coloring agent as well as a food additive in Asian cuisines. Its therapeutic effects purportedly due to its antioxidant and anti-inflammatory properties, have recently garnered attention from a range of different fields; including wound recovery, pulmonary injury induced by smoke, metabolic syndrome, atherosclerosis, diabetes and a variety of liver disorders such as viral hepatitis, alcoholic liver disease, cirrhosis and hepatocellular carcinoma.[8],[9] Moreover, it has been postulated as a potential treatment for psoriasis via inhibition of interleukin-17/23 production.[10] These cytokines also play an important role in the pathogenesis of AGEP, but further investigation is needed to verify the biological mechanism by which curcumin may induce AGEP.

In summary, we report a patient who took curcumin for her unresectable hepatocellular carcinoma and developed a severe cutaneous skin eruption. To our knowledge, this is the first case of AGEP induced by curcumin, reported in the literature. As more and more cases have found an association between adverse drug eruption and traditional medication, we believe it is critical for physicians to recognize herbal drugs as potential culprits of severe cutaneous adverse reaction.