Background: A wide variety of systemic diseases and internal malignancies have cutaneous manifestations. In the context of internal malignancy, many cutaneous changes are highly specific to the underlying malignancy, while other changes are nonspecific. Some changes are also due to the modalities employed in the treatment of malignancies.
Methods: Two hundred and fifty patients who were diagnosed with internal malignancy and who were attending the department of radiation oncology, were evaluated at the Department of Dermatology, Sexually Transmitted Diseases and Leprosy of Government Medical College, Srinagar. The study was conducted over a period of 5 months. Relevant investigations, wherever needed, were carried out.
Results: Among the 250 cases examined, nonspecific cutaneous changes were seen in 39 (15.6%) cases, whereas specific skin lesions in the form of cutaneous metastases were seen in two (0.8%) patients. Nail changes and hair changes were also seen in some patients.
Limitations: As this was a cross-sectional study and most of the patients were lost to follow up, we could not assess the outcome of the dermatological changes seen in the affected patients.
Conclusion: Many dermatological changes are noticed early in the course of malignancy, reflecting a strong association of the cutaneous change with malignancy. Few manifestations occur late in the course of the disease, indicating dissemination or immunosuppression. Some changes reflect radiation-induced or chemotherapy-induced toxicity, indicating the need for treatment modifications.
Keywords: Internal malignancy, metastases, skin

Skin is the largest organ of the human body with a myriad of pathological conditions affecting it directly or indirectly. A wide variety of systemic diseases and internal malignancies have cutaneous manifestations. These manifestations are highly varied, diverse and can include specific or nonspecific changes.[1] In the context of internal malignancy, many cutaneous changes are highly specific to the disease, occur primarily due to the malignancy and include cutaneous metastases and cutaneous markers of various tumor syndromes.[2] Other changes are nonspecific and include paraneoplastic syndromes, cutaneous infections, pigmentary disturbances, etc. Some changes are also due to the various treatment modalities employed; for example, alopecia, papulopustular rash, hand-foot syndrome, paronychia and mucositis are common skin reactions seen in patients undergoing chemotherapy.[3] These mucocutaneous adverse effects seen with the malignancy or its treatment are often distressing to the patient, in addition to his/her primary disease.[4] Moreover, the pathogenesis of these disorders is also varied, as these can arise due to immunological, metabolic and metastatic consequences of the malignancy.[5]

Owing to the significant correlation between dermatological changes and internal cancers, numerous studies have been conducted all over the world to assess the cutaneous manifestations of internal malignancies. However, we could not find a study of this nature conducted on the patients of Kashmir valley. Accordingly, an attempt was made to fill this lacuna.

This study was carried out by the Department of Dermatology, Sexually Transmitted Diseases and Leprosy, Government Medical College, Srinagar, in collaboration with the department of radiation oncology, for a period of 5 months. Two hundred and fifty patients, diagnosed with internal malignancy, who visited the department of radiation oncology for treatment purposes within the study period, were included in the study. All suspected cases of malignancy whose investigations were awaited and those with primary cutaneous malignancies were excluded from the study. A questionnaire was formulated to collect the necessary details from each patient, his/her acquaintances or medical records. This included relevant history such as demographic variables (age, sex and residence), data pertaining to the type of malignancy, duration since diagnosis and the presence/absence of metastases (and if present, the type of metastases). Information was also obtained about any surgery done, the chemotherapeutic agents administered and whether radiotherapy was given. The patient was also asked about any dermatological symptom/complaint that occurred during the course of the illness or which developed following treatment. Moreover, a detailed systemic and dermatological examination was performed to look for any change/disease in the skin, mucosae and adnexae. In case of any positive finding, the approximate time interval between the onset of the cutaneous change and the time of diagnosis of malignancy or chemotherapy administered was ascertained. Relevant investigations such as potassium hydroxide examination, skin/mucosal biopsy and Tzanck smear were carried out, wherever deemed necessary.

Two hundred and fifty diagnosed cases of internal malignancy were included in this study. Of these, 139 (55.6%) patients were men, while women were 111 (44.4%) in number. The age of the patients ranged from 15 years to 90 years, with a mean age of 54.11 years. The number of patients in the various age groups is shown in [Table - 1]. Colorectal carcinoma was the most common malignancy seen, accounting for fifty (20%) cases. Other malignancies seen with their respective frequencies are presented in [Table - 2]. The duration of the disease varied from 0.190 years to a maximum of 4 years with a mean duration of 1.17 years. 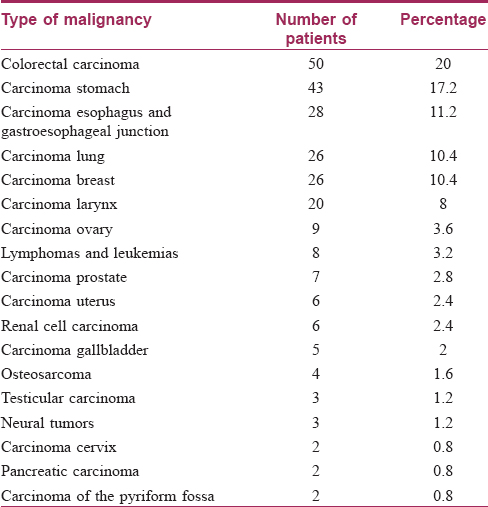 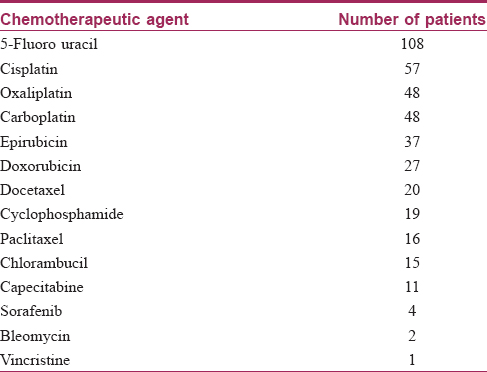 When the patients were examined and investigations were analyzed, different metastatic lesions were identified in 53 (21.2%) patients. Of these, hepatic metastases were seen in 27 patients, followed by other areas either singly, or in combination. Cutaneous metastases were seen in two patients; one with contiguous spread and another with noncontiguous metastasis [Table - 4] and [Figure - 1], [Figure - 2]. 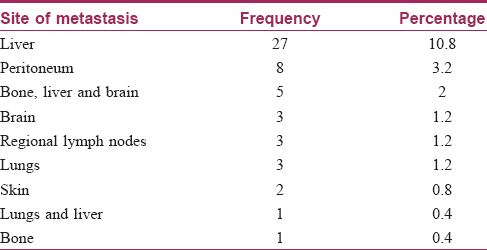 Nonspecific cutaneous changes were seen in 39 (15.6%) cases. Various nonspecific skin lesions seen in our study are given in [Table - 5]. 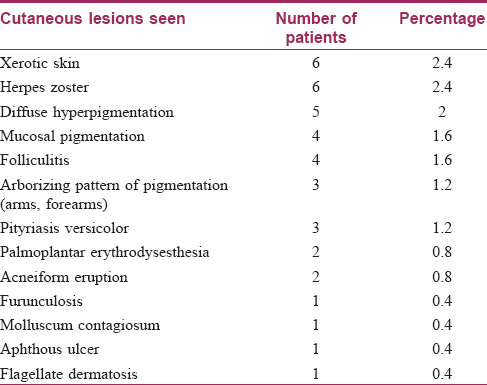 Internal malignancies are on the rise nowadays with increasing number of malignancies being diagnosed. Many malignancies demonstrate cutaneous involvement which can be detected easily as skin is the most accessible organ and the change can be diagnosed with minimum investigations. These varied skin changes are collectively called dermadromes of internal malignancy or syndroma dermato-tumorale.[6] Many attempts have been made to classify these changes. One commonly used classification of skin markers of internal malignancy is to group them into – (1) skin metastasis, (2) paraneoplastic dermatoses, (3) cutaneous manifestations of the systemic carcinogenic disease process and (4) cancer-malformation syndromes.[6]

Accordingly, some of these skin changes are highly specific for the disease, i.e., cutaneous metastases or changes due to the treatment of the malignancy. Other findings are nonspecific; occurring due to immunosuppression, infection or some other unrelated mechanisms. At times, some of these changes are noticed early in the course of the malignancy, indicating a strong association with cancer, while some others occur late in the course of the disease indicating dissemination or immunosuppression. Moreover, many changes reflect radiation or chemotherapy-induced toxicity, indicating the need for treatment modifications.

Malignancies were more common in men than women in our study, constituting 55.6% and 44.4% cases, respectively (man:woman ratio of 1.25:1). Similar results were obtained in another study from the valley by Wani et al.[7] Among the various malignancies, the most common malignancy was colorectal carcinoma (20%), followed by carcinomas of other regions of the gastrointestinal tract. This was in contrast to the findings of Wani et al. where esophagus and gastrointestinal junction followed by the lung and stomach were the leading causes of malignancy.[7]

Skin is a rare site for metastases even though it is the largest organ of the human body.[9],[10] Our study too authenticated this fact as only two patients with cutaneous metastases (0.8%) were seen. This goes in accordance with other studies which show that the frequency of cutaneous metastases is low, ranging from 2% to 9%.[11] One of these patients had carcinoma of the right lung since the last 3 years. The cutaneous lesion was in the form of a single, well-defined, ulcerated plaque on the scalp for the last 6 months. Histopathology of this lesion was identical to the underlying malignancy (i.e., adenocarcinoma). This finding could go in accordance with other studies wherein carcinoma lung is an important and the most common source of cutaneous metastases.[12] However, the number of such cases is low in our study to formulate a correlation. The second patient was that of ductal carcinoma breast with contiguous involvement of the skin of the anterior chest wall.

Among the other cutaneous changes seen, infectious and noninfectious lesions were found. Herpes zoster was the most common infection seen. Other studies have also found herpes zoster to be the most common nonspecific skin lesion seen in patients with internal malignancies.[5],[13] Infections, especially herpes zoster, are commonly encountered in malignancy patients possibly due to multiple factors, especially immunosuppression and antineoplastic drugs.

A unique but recognized cutaneous change that was also identified in our study was the occurrence of palmoplantar erythrodysesthesia in two patients. One patient was a case of renal cell carcinoma on sorafenib for 5 months. Another patient was a case of carcinoma colon on oxaliplatin and capecitabine for 7 months. This cutaneous change has been reported in literature to many drugs including sorafenib and capecitabine [Figure - 6].[14]

Another rare cutaneous change that was encountered was the presence of linear hyperpigmented streaks on the back in a man. He had developed this change 2 months after the initiation of chemotherapy. The patient was a 65-year-old carcinoma colon patient who had undergone surgery and had been on chemotherapeutic drugs – 5-fluorouracil and oxaliplatin. The clinical picture and histopathology went in favor of flagellate dermatosis. The latter is a known cutaneous side effect of bleomycin.[15] Other drugs such as peplomycin, docetaxel and bendamustine have also been implicated.[16],[17],[18] Hence, this is a rare case of flagellate dermatosis occurring possibly due to one of the above-mentioned drugs (5-fluorouracil or oxaliplatin) [Figure - 7].

Numerous studies have shown that chemotherapy can cause nail changes such as pigmentary disturbances, nail dystrophy, leukonychia, onycholysis and others.[4],[19],[20] A spectrum of nail changes was seen in our patients too. Most of the nail changes seen were possibly chemotherapy induced as all these changes appeared after the patients received various chemotherapeutic agents. Diffuse nail pigmentation was seen in seven patients, all of whom developed these changes within 2–3 months of starting these drugs. The most common chemotherapeutic agents that were received by these patients were cisplatin, cyclophosphamide, epirubicin, 5-fluorouracil, doxorubicin and docetaxel.

All aspects of this study point toward the fact that the dermatological evaluation of a patient with internal malignancy is an indispensable component of his/her disease evaluation and treatment. A detailed and regular dermatological checkup can enable the treating doctor to diagnose an early internal malignancy, look for any signs of spread and detect the earliest signs of therapeutic toxicity and accordingly modify the treatment regime.

However, the course and outcome of most of these cutaneous manifestations could not be assessed as many patients were lost to follow-up, possibly due to the morbidity/mortality caused by the primary disease.

Many dermatological changes are noticed early in the course of malignancy, reflecting a strong association of the cutaneous change with the malignancy. Some manifestations occur late in the course of the disease, indicating dissemination or immunosuppression. Some changes reflect radiation-induced or chemotherapy-induced toxicity, indicating the need for treatment modifications.