Dermatology referrals in the hospital setting 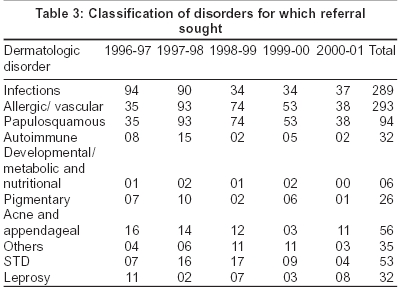 Dermatology practice takes place mainly in the outpatient setting but a substantial part represents inpatients referrals from other specialists in a large hospital.[1] Reasons for inpatient dermatological consultation and the extent to which it contributes to cutaneous care are not well documented.[2] This is in stark contrast to outpatient/referrals in any dermatology department.[3],[4] Because of the recent dramatic changes in the way health care delivery is assessed, it would be of interest to doctors and health care delivery workers to know the reasons for dermatology consultations and its impact on diagnosis and treatment.[5] In this retrospective study, we describe the results of this type of analysis in a medium-sized hospital complex with basic specialties.

This retrospective study was carried out at 158 Base Hospital, West Bengal assessing data over a period of 5 years. The Department of Dermatology at the hospital is responsible for all dermatological consultations for inpatients and for those evaluated at in either emergency or urgent care setting. A practicing dermatologist assessed all patients. Patients were evaluated within 24 hours from the time the consultation was requested, most commonly within a few hours. Details of the patients′ complaints, diagnosis and treatment and results of diagnostic tests, if any were noted. Of particular note is that the presumptive diagnosis by services requesting consultation was also recorded. Follow-up details were included in the records.

During a 5- year period, dermatological consultation was requested and delivered to 971 patients either hospitalized or being evaluated in emergency services [Table - 1]. According to the hospital′s statistical data available for this study period, this constituted less than 10% of the total no. of patients seen by a dermatologist, the rest being in OPD service. New referrals constituted half the cases. Half the cases required more than one consultation. The year-wise distribution is shown in [Table - 1].

Almost all specialties required the services of a dermatologist during the management of their patients [Table - 2].

The surgical and medical specialties were the source of more than half the referrals to the dermatologist. Psychiatry constituted the largest single group and this was in vogue with the present stress on psychocutaneous disorders. Scabies, dermatophytosis and lichen simplex were the commonest dermatological diagnoses in these patients. The dermatologist was rarely consulted for patients in emergency service or in intensive care unit. This is in sharp contrast to the findings of similar studies elsewhere.[6] Vaginal discharge and pruritus vulvae were the commonest causes for which a dermatologist′s services were sought by gynecologists. Sexually transmitted diseases and infections constituted the commoner referrals from the surgeons. An interesting case was the misdiagnosis of a case of lepra reaction as rheumatoid arthritis. A combination of NSAIDs and oral steroids masked the true picture that was unveiled by a slit skin smear for AFB.

The common etiological disorders for which referrals were sought are shown in [Table - 3]. Infections and eczemas constituted the largest load of patients. Cutaneous rash was the commonest referring diagnosis followed by eczemas. It seems that the referring doctors often could not think of a specific or differential diagnosis. Of particular interest is that cutaneous infections were often not recognized by the referring service. It is to be noted that the referring doctors were often wrong about common dermatological problems for which there are established treatments. Acne and pigmentary disorders constituted a minority probably in view of their associated lower morbidity status.

In a similar study from South India, internal medicine followed by orthopedics requested the most dermatological consultations. Less than 10% were offered a diagnosis by the referring speciality and even fewer corroborated with the dermatologists diagnosis.[7]

We report these data at a time when a controversy rages on the need for dermatology center in many hospitals in the United States.[8] Interestingly, the point made by their health care evaluators is that general physicians can handle most common dermatoses.[9] Stated a little differently, it is said that the few rare diseases that are more accurately diagnosed and treated by specialists do not justify reliance on specialty care.[10]

The present data strongly suggests that at least with regards to dermatology in India these assumptions do not hold. Referring specialties often missed common dermatologic diagnoses.[11] The extent of misdiagnosis was staggering-61% and resulted in a change of management in most cases. However, we did not document treatment details, so our data does not allow us to make a definite impact of dermatologic consultation on drug prescriptions. A larger, multi-centric prospective study would perhaps provide a more accurate evaluation on the role of dermatologists in providing accurate diagnosis and better management of patients seeking dermatological consultation.

To conclude, we report that common dermatologic diseases are often not recognized or are misdiagnosed by non-dermatologists. To remedy this situation, in any health care system we recommend more substantial and probably continued training for doctors in both dermatologic diagnosis and treatment and awareness of the variety of bedside tests used by dermatologists.[12]