A 45-year-old man, on carbamazepine for the past 3 months, was referred as a case of atypical measles. On examination, he had high-grade fever, generalized itchy rash, cough, vomiting and jaundice. A provisional diagnosis of drug hypersensitivity syndrome to carbamazepine was made with a differential diagnosis of viral exanthema with systemic complications. Laboratory investigations revealed leukocytosis with eosnophilia and elevated liver enzymes. Real-time multiplex polymerase chain reaction (PCR) on throat swab and blood was suggestive of human herpesvirus-6 (HHV-6). Measles was ruled out by PCR and serology. The diagnosis of drug-induced hypersensitivity syndrome (DIHS) was confirmed, which could explain all the features manifested by the patient. HHV-6 infects almost all humans by age 2 years. It infects and replicates in CD4 T lymphocytes and establishes latency in human peripheral blood monocytes or macrophages and early bone marrow progenitors. In DIHS, allergic reaction to the causative drug stimulates T cells, which leads to reactivation of the herpesvirus genome. DIHS is treated by withdrawal of the culprit drug and administration of systemic steroids. Our patient responded well to steroids and HHV-6 was negative on repeat real-time multiplex PCR at the end of treatment.
Keywords: Carbamazepine, drug-induced hypersensitivity syndrome, human herpesvirus-6

Drug-induced hypersensitivity syndrome (DIHS) or drug rash with eosinophilia and systemic symptoms (DRESS) is evoked by a drug, (usually an aromatic anticonvulsant) started 3 weeks to 3 months before the onset of symptoms. [1],[2] Now, it is postulated that an interplay of a virus and a drug with the immune system of the affected person leads to this clinically challenging condition. [1] It is well documented that DIHS has been associated with reactivation of human herpesvirus-6 (HHV-6), HHV-7, Epstein Barr virus (EBV) and cytomegalo virus (CMV).

Because of multisystem involvement, it is often misdiagnosed as an infectious disease or a lymphoproliferative disease or an autoimmune disease. [1] We report this case to stress the need to include it in the differential diagnosis of pyrexia of unknown origin. Prompt withdrawal of the causative drug and steroid administration result in complete remission in most cases. To the best of our knowledge, this is the first report of HHV-6 reactivation in DIHS from India.

A 45-year-old man, on carbamazepine for the past 3 months, consulted a doctor nearby with high-grade fever, generalized itchy rash, cough, vomiting and jaundice. He had been advised to stop carbamazepine and prescribed antihistamines and antibiotics, without any response. He was then referred as a case of atypical measles.

On the 20 th day of illness, he was admitted to the Government Medical College Hospital, Calicut.

Diagnosis of typical DIHS was confirmed as per the criteria proposed by the Japanese consensus group [1],[2] [Table - 1], which could explain all the features manifested by our patient, including HHV-6 reactivation.

The patient was started on 50 mg prednisolone and he responded well [Table - 2]. The steroid was slowly tapered and stopped over 3 months. HHV-6 was negative on repeat real-time multiplex PCR at the end of treatment. 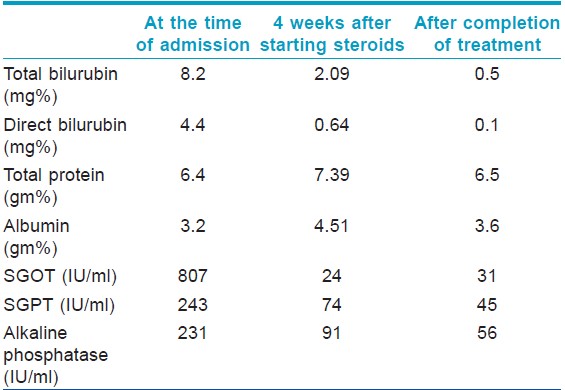 DRESS was defined by Bocquet et al. as a constellation of symptoms and signs, the main features being a cutaneous eruption after exposure to the offending drug (carbamazepine in our case), associated with fever and organ involvement. [2] Drugs commonly associated with DRESS are carbamazepine, phenytoin, phenobarbitone, lamotrigine, minocycline, allopurinol, dapsone, diltiazem, abacavir, nevirapine and non-steroidal anti-inflammatory drugs like ibuprofen, etc. [1],[3],[4]

A simple drug etiology cannot explain all the features of DIHS, like its delayed onset, paradoxical worsening of clinical symptoms after stopping the causative drug and multiple organ system failures in a stepwise manner. [5] Now, it is postulated that an interplay of a virus and a drug with the immune system of the affected person leads to this clinically challenging condition. [1]

Drugs like phenytoin, phenobarbitone and carbamazepine are metabolized to reactive aromatic epoxides by the cytochrome P 450 system. These toxic metabolites are detoxified by epoxide hydroxylase, which may be defective in DIHS. Therefore, a high level of the drug or a reactive metabolite may initiate the immune response.

It is well documented that DIHS has been associated with reactivation of HHV-6, HHV-7, EBV and CMV. DIHS patients having HHV-6 reactivation developed a more severe and prolonged form of the disease. [6],[7]

HHV-6 infects nearly all humans by age 2 years. It infects and replicates in the CD4 T lymphocytes and establishes latency in human peripheral blood monocytes or macrophages and early bone marrow progenitors. [8] In DIHS, allergic reaction to the causative drug stimulates T cells, and this T cell stimulation leads to reactivation of the herpesvirus genome. [1]

Diagnosing DIHS early is of utmost importance as delay in treatment can be fatal. Various diagnostic criteria are proposed for DIHS [Table - 1].

The initial manifestation of DIHS is fever (38°C-40°C). Majority of the patients subsequently develop an erythematous morbilliform rash with facial edema. In some cases, especially when the offending drug is not withdrawn, a severe exfoliative dermatitis occurs. [1] Hepatomegaly, hepatitis, splenomegaly and hematological abnormalities are common, whereas mucosal involvement is minimal. Pneumonitis, interstitial nephritis and myocarditis are also reported. A high mortality rate of 10-20% is seen in DIHS due to multiorgan failure.

Withdrawal of the causative drug and administration of prednisolone 1-1.5 mg/kg body weight are curative in most cases. Steroids act by suppressing T cell stimulation and inhibiting release of cytokines. [9] Rapid tapering of steroids may result in rebound flare up.

Although there are many reports of DIHS with herpesvirus reactivation in the foreign literature, we did not come across any such reports from India.