The nail apparatus consists of a horny "dead" product, the nail plate, and four specialized epithelia: the proximal nail fold, the nail matrix, the nail bed, and the hyponychium. [1] The bulk of the nail plate is constituted by hair type (hard) keratins which comprise 80% to 90% of the nail plate. Epithelial type keratins account for 10% to 20%. The overall sulphur content is approximately 10% by weight. The disulfide bonds of cystine in the matrix proteins contribute maximally to nail hardness by gluing the keratin fibers together. Calcium does not contribute to nail hardness and makes up only 0.2% of the nail plate by weight. The lipid content is relatively low compared with the lipid content of the stratum corneum. Glycolic and stearic acids are nail plate lipids and their presence contributes to the water resistance. Despite the water resistance, the hydration status of the nail plate is another factor determining its hardness. The nail plate′s water content can vary greatly, with normal content being 18%. Nails become brittle when the water content is less than 16% and become soft when greater than 25%. Minerals are another important aspect of the nail plate′s composition; mainly, magnesium, calcium, iron, zinc, sodium, and copper. [2]

Malnutrition and the Nails

Since the normal nail-plate is constituted by a variety of nutrients in certain optimum proportions, almost any nutritional deficiency can produce significant changes in the nail plate. Some nutritional anomalies can also affect the nail bed. The changes may either be visible clinically or else on biochemical investigation. For instance, it has been shown that the nails of children with kwashiorkor show an increased sodium and calcium concentration and decreased magnesium concentration. [3] The iron content of nails may be lower in patients with iron deficiency anaemia. [4] There seems to be a reasonable correlation between the body and blood levels of nutrients and their concentrations in the nail plate. It works both ways - in deficiency states nail concentrations drop while in excessive intake or toxicity, the nail concentrations rise. Nail copper concentrations are raised in Wilson′s disease. [5] Nail arsenic levels can be used to diagnose arsenic poisoning. In particular, studies have shown significant positive correlation between plasma and nail selenium levels. [6],[7]

The various clinically visible anomalies of nails that can be associated with nutritional deficiencies are discussed below.

Nail Changes in Protein and Energy Deficiency and Malnutrition in General

Kwashiorkor is a nutritional syndrome due to severe protein malnutrition with relative carbohydrate excess which results in retardation of skeletal and mental development, muscular wasting, fatty liver and oedema. Marasmus is the result of prolonged starvation, a wasting syndrome, resulting in 40-50% reduction in body weight but with no peripheral oedema. Kwashiorkor is associated with nails that are soft and thin and marasmic children have fissured nails and impaired nail growth. [8]

Muehrcke′s lines are commonly associated with hypoalbuminaemia, the correction of which by albumin infusion can reverse the sign. [9] These are paired, narrow white transverse bands reflecting abnormal nail bed vasculature. When pressure is applied to the distal plate, the narrow transverse bands disappear, i.e apparent leuconychia. [2] Leukonychia refers to whitish discolouration of the nail plate. It can be true (due to nail plate abnormality) or apparent (due to nail bed abnormality, in which case it fades on pressure). [1]

Though classically associated with liver disease, Terry′s nails can also be seen in malnutrition, especially in the elderly. [2] They consist of apparent leukonychia over the proximal nail bed with a distal pink or brown band 0.5 to 3.0 mm wide. Histology of the distal band shows mainly telangiectases and the white colour is thought to reflect hyperplasia of connective tissue between the nail and bone. [9]

Beau′s lines are among the most common yet least specific signs encountered in clinical practice. Nutritional causes include protein deficiency and the general malnourished state associated with chronic alcoholism. [2] These are transverse linear depressions in the nail plate which may be caused by any disease severe enough to disrupt normal nail growth. [10] The width of the furrow is an indicator of the given ailment′s duration. Measuring the distance from the furrow to proximal nail fold gives an approximate time when the insult may have occurred. [2]

Brittle nail syndrome (BNS) is a phenomenon which can result from a multitude of causes and they are a frequent finding in poorly nourished patients. [3],[11] BNS is characterized by soft, dry, weak, easily breakable nails that show onychorrhexis and onychoschizia. [4] Onychorrhexis refers to longitudinal splitting which begins at the free edge and extends proximally while onychoschizia is lamellar peeling of the free edge of the nail plate. [11] Brittle nails are commonly seen in patients with anorexia nervosa and they have been attributed to the starvation, idiosyncratic eating habits, and malnutrition associated with this disorder. [12] Poor food and water intake contribute to and precipitate brittle nails in the elderly. [2]

The protein-losing enteropathy of Cronkhite-Canada syndrome (intestinal polyposis, malabsorption, pigmentation, alopecia and nail defects) is associated with dystrophic nails which undergo onycholysis, onychoschizia and onychomadesis with a peculiar, triangular, residual nail plate. [13] Onycholysis is defined as separation of the nail plate from the underlying nail bed, causing a proximal extension of free air while onychomadesis describes complete onycholysis, beginning at the nail plate′s proximal end, which results in complete nail shedding. [2]

Although nonspecific, pallor of the nail bed can be a sign of anemia and an indication that body stores of iron may be low. [2] Koilonychia refers to a reverse curvature in the transverse and longitudinal axes giving a concave dorsal aspect to the nail. [14] It is thought to occur due to a relatively low-set distal matrix compared to the proximal matrix that causes nail plate growth to occur in a downward direction as it grows towards the nail bed. [2] Koilonychia is classically a sign of iron-deficiency anemia. [15] Koilonychia reported in post-gastrectomy patients and those with Plummer-Vinson syndrome has also been attributed to the associated iron deficiency. [2] Interestingly, it occasionally occurs in patients with hemochromatosis. [10]

Transverse leukonychia of all nails can be associated with severe hypocalcemia and good response has been reported to treatment with calcium. [16] Transverse leukonychia is characterized by transverse, opaque white bands that tend to occur in the same relative position in multiple nails. Measuring the distance of the line from the proximal nail fold gives a time reference from when nail insult occurred. [2] The hypotheses proposed for development of leuconychia in hypocalcemia include induction of digital arteriolar spasm and disorganization of the hard keratin of the nail. [16]

Onychomadesis can result from the neurovascular change associated with repeated episodes of drops in blood calcium levels or a chronic state of hypocalcemia with arteriolar spasm which results in an abrupt separation of the nail plate from the underlying nail matrix and nail bed. [2]

Other nail changes reported to be associated with hypocalcemia include brittle nails with onychorrhexis and longitudinal striations. [17] Hapalonychia, or soft nails, has been associated with a variety of nutritional deficiencies including low serum calcium. [2]

Patients with reduced plasma magnesium levels can develop soft, flaky nails that are inclined to break or split. [2] Patients on prolonged total parenteral nutrition (TPN) tend to become selenium deficient; cases have been reported where the fingernails turned white in association with low serum and urinary selenium levels and the nail changes resolved dramatically after selenium therapy was instituted. [19],[20] Clubbing of nails is associated with the cretinism caused by iodine deficiency. [2]

Deficiency of B vitamins

Apart from iron deficiency, riboflavin deficiency and pellagra have also been implicated in the development of koilonychia. [2] Transverse leukonychia of all nails associated with pellagra has been reported which showed a good response to treatment with vitamin B3. [22] Pellagra can also be associated with Beau′s lines and onycholysis. [2] Furthermore, a case of pellagra has been reported where the patient developed half and half nails simultaneously with the onset of the skin lesions and the lesions regressed with nicotinamide therapy. [23] Half and half nails show a proximal white zone and a distal (20-60%) brownish sharp demarcation, the histology of which suggests an increase in vessel wall thickness and melanin deposition. It is commonly associated with renal failure. [14]

Deficiency of vitamin B6 (pyridoxine) can be associated with hapalonychia. [2] Biotin deficiency leads to dystrophic nails. The inborn errors of biotin metabolism, namely holocarboxylase synthetase deficiency and biotinidase deficiency are associated with nail dystrophy and onychoschizia apart from other cutaneous and neurological symptoms. All symptoms including nail changes respond to biotin supplementation. [8]

Splinter haemorrhages can be seen in scurvy though they are classically associated with subacute bacterial endocarditis and are most frequently caused by trauma. They are formed by extravasation of red blood cells from longitudinally oriented nail bed vessels into adjacent longitudinally oriented troughs. [2] They appear as red to black thin longitudinal lines under the nail-plate. [1] Vitamin C deficiency has also been associated with koilonychia and hapalonychia. [2]

A summary of the important clinical nail anomalies and the associated nutritional deficiencies is provided in [Table - 1] since a variety of deficiencies can lead to a similar picture. 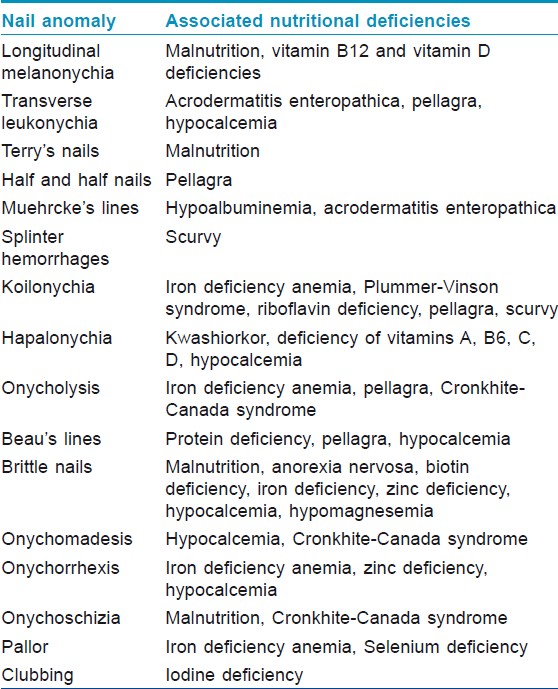 Nutritional supplements and the nails

Extended iron supplementation appears to decrease the brittleness of already brittle nails even in patients without overt iron deficiency. Studies have also suggested that silicon supplementation can improve the appearance of brittle nails. However, the best documented so far is the use of biotin to treat BNS. Clinical trial evidence exists and the beneficial effects usually start after 2 to 3 months of supplementation. The optimal duration of the treatment has not been determined. [4] Whether supplementation is legitimately correcting an underlying biotin deficiency or improvement in nail brittleness is through some other mechanism is yet to be elucidated. [2]