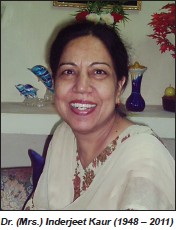 It is with deep regret and profound sorrow that I write these few lines about my colleague and friend Dr. Inderjeet Kaur who passed away on 7 September, 2011.

Dr. Inderjeet Kaur was born on 22 October, 1948. She graduated from the Punjabi University, Patiala, in 1972, and obtained her M.D. in Dermatology, Venereology, and Leprology from the same college in 1979. After a short stint as the Registrar in the Rajendra Medical College, Patiala, she joined the Department of Dermatology at the Postgraduate Institute of Medical Education and Research (PGIMER), Chandigarh, in 1980, as a senior resident. She remained attached to the Institute in various capacities for 31 years. She became a Professor in 2006. During this vast academic career, she authored more than 175 articles in peer-reviewed, indexed, national, and international journals and presented her studies in about 30 conferences.

She was a great teacher and took a keen interest in the academic performances of the residents. She guided and co-guided more than 50 postgraduate students and taught Dermatology Residents the art and science of clinical dermatology. Her special areas of interest were leprosy and psoriasis, in addition to clinical dermatology. She had amazing clinical skills and gave importance to every minute detail on the skin lesion. She was an active member of several academic associations and held various positions in different conferences, CMEs, and workshops organized by these bodies.

Her contributions to Dermatology were recognized by many organizations. She was awarded the Fulford oration by the Indian Association of Dermatologists, Venerologists and Leprologists (IADVL), in 1998, and was the recipient of the prestigious Maria Duran Medal in 2010, an award in memory of Maria M. Duran, former Secretary-General and Executive Vice President of the International Society of Dermatology.

Prof. Inderjeet Kaur had to face several difficulties in her life due to prolonged illness of her husband, a famous cardiothoracic surgeon at the PGIMER. She remained unfazed through all the difficulties and faced them with courage and poise. She almost single handedly reared her children and established them in life. She is survived by a son and a daughter.

Prof. Inderjeet′s death has created a vacuum, which will be difficult to fill. I can never forget how she used to sit in the seminar room and ask for some more hot tea just to give me company. Early mornings I would ring her up to tell her to switch on the TV to listen to our favorite Hazoori Ragi from the Golden Temple, Amritsar. Often we would recall the IADVL conferences we attended together. Noteworthy among these was 1989 conference at Mumbai when Late Prof. Surinder Kaur took us both to the sets where Amitabh Bachchan and Amrish Puri were shooting. Dr. Inderjeet regarded this conference as the best of all. During my long association of more than 25 years, I never saw her lose her cool. She was always smiling. As our President Dr. Srinivas put it, there was sadness in this smile. Alas we could not pick it up. Dr. Inderjeet was a very vibrant woman full of life. She was always there for others in their difficult times, helping them out in every possible manner. She had an elephantine memory and we all used to turn to her whenever we had a disagreement about a diagnosis. She had an immaculate dress sense and had a very graceful and impressive personality. Above all, she was a great human being. Her death is a big loss to the Dermatology fraternity. Her contributions to the field of Dermatology and Leprosy are invaluable and will always be remembered. We pray to God that her soul rests in peace.

Inderjeet we miss you at every step.