The use of complementary and alternative medicine (CAM) has increased by 20-50% in European and 48.5% in Australian population. [1],[2] Usually, the patients of chronic, intractable diseases end up using CAM after taking allopathic medicine (AM); but for some diseases, they may use CAM as the initial therapy. [1],[2],[3] Vitiligo is one such disorder in which patients may initiate therapy with CAM. The present study explores the factors influencing the initial preference of system of medicine in vitiligo patients.

This was a prospective, non-interventional, questionnaire based study over a period of two years in 2005-2006 for which no prior approval from the institutional ethics committee was required. Ninety consecutive patients of vitiligo were included in the study after an informed consent was taken. In addition to detailed history and clinical examination, supplementary information about education, socioeconomic status, other therapies taken and expectation from treatment were recorded. Those with history of taking both allopathic and CAM together initially were excluded. The patients were divided into two groups based on the type of initial therapy taken i.e. AM group and CAM group and were compared for various factors. The data was analyzed to test the association of various factors with the choice of therapy by using the Chi square test. Fifty patients each of similar asymptomatic pigmentary dermatoses of cosmetic importance like melasma and pityriasis versicolor constituted control group I and II which were compared with vitiligo patients for preference of initial therapy.

The socio-demographic profile of vitiligo patients showed a slight preponderance of lower socioeconomic status and females in CAM group as compared to AM group (statistically not significant, P<0.1). [Table - 1] The literary status of patients of both groups was almost similar except for the marginal increase in the illiterate people in CAM group (P<0.1). The type of disease and initial site of lesions, although different in both groups, was not statistically significant (P<0.1). The influence of family and friends in CAM group was statistically significant (P<0.02). All the patients (100%) of CAM group expected a complete cure as compared to 90.3% of AM group (P<0.05). 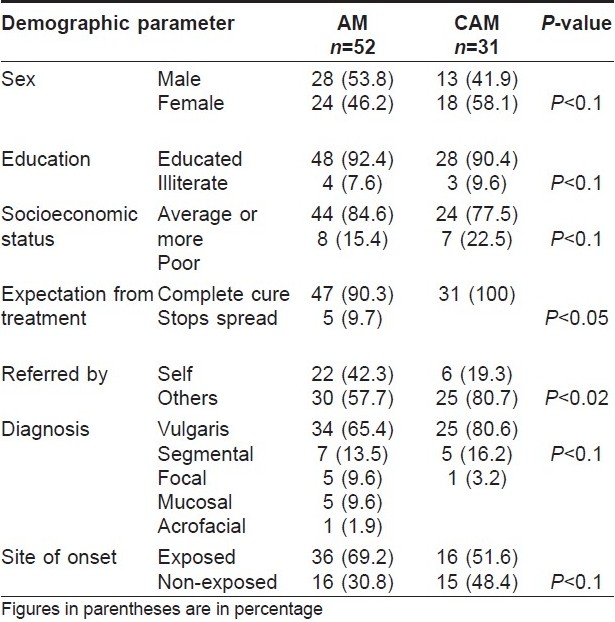 Complementary and alternative medical therapies (CAM) have recently become popular in treatment of chronic and intractable diseases like diabetes mellitus, headaches, arthralgia, stress, skin disorders, backaches, hypertension, etc. [1],[2] The majority of patients usually begin treatment with allopathic medicine before trying traditional or complementary and alternative medicine, [3] but the myths and social stigma associated with vitiligo have many advocates of initiating therapy with CAM in this disease.

The present study confirms that patients of vitiligo have an increased tendency to opt for CAM as compared to other diseases of similar cosmetic significance like melasma and pityriasis versicolor. The reason for this preference seems to be uninfluenced by sex, literary status, socioeconomic status, type and initial site of disease. Singh et al. has also failed to observe the influence of age, sex, marital status, religion, level of education and income in preference for CAM in the Indian community in South Africa. [4] However, in US and Australian studies, higher levels of education and socio-economic status were significant positive correlates of CAM use [2],[5] while age and gender had no influence on the same. [3] The patients who tried CAM expected a complete cure and were influenced by family and friends to seek alternative cures. This may be because the stigma associated with vitiligo leads to immense social pressure to get complete cure which is promised by the advertisements of CAM. The influence of family and friends was also documented by Singh et al. as greater than half (51.9%) of CAM users did so either upon the advice of someone they knew, or after noticing a CAM advertisement. [4]

The present study by virtue of its study design had the limitation that the vitiligo patients opting for AM only could be assessed, while those never opting for AM could not be included.

The belief in CAM for vitiligo is probably ingrained in the historical background of this disease in a particular community, which needs further evaluation.