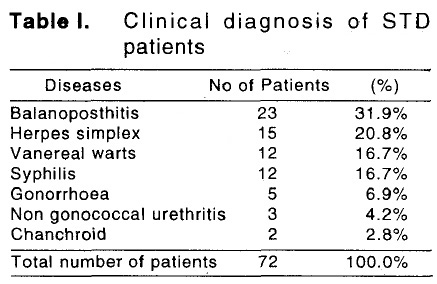 Starting from the North America, taking few homosexual men in 1981, this fatal disease AIDS is gripping the whole globe, breaking all the barriers of age, sex, race, status or geographical distribution.

The WHO estimated that by the year 2000, 4 million Indians will be infected by HIV and over 1.7 million would have AIDS. Till now there is no cure or vaccine to prevent the attack of HIV causing the fatal outcome.

HIV is a ′C′ type retrovirus having 2 subtypes HIV I and HIV II, transmitted mostly (75%) by bidirectional unprotected sexual practices with highest incidence in sexually active age group (15-40 years). Presence of STD which are almost confined to this age group, especially those having genital ulcers, facilitates the aquisition and transmission of HIV. Thus it can be stated that patients having STD with active sexual life are at higher risk of getting infected with HIV and thus of AIDS.[1],[2],[3],[4]

The present study was conducted in outdoor clinic of Skin and VD of LLR and Associated Hospitals, Kanpur. The patients attending the STD clinic between October 95 and September 96 and found positive for STD were screened for antibodies to HIV tested by ELISA using commercial kits at Zonal AIDS Center, Blood Bank, Kanpur.

We also found only 12.5% women in our study in comparison to 40% in West.[3] This may be due to lesser promiscuity, illiteracy, lack of awareness about STD and stigma attached to STD.

A total number of 72 cases of STD were investigated and none of them was found to be seropositive for HIV. However, a large study sample is required for proper evaluation.

Most of the studies conducted in Western and African countries show a high seroprevelance in STD patients. Indian studies on HIV seropositivity in STD patients however did not show any significant changes. This might be due to greater promiscuous behaviour, IV drug abuse, higher homosexual prevalence and early age to begin the sexual activity in Western world.

But in India more cultural values and social boundations keep the seropositivity towards lower side. To maintain this low profile more awareness and public education is needed towards healthy sexual practices to get rid of the demon of AIDS[4].