Is leprosy 'Elimination' a conceptual illusion?

On 30 th of January 2006, India announced elimination of leprosy as public health problem at national level under the National Leprosy Eradication Programme (NLEP). With five years having passed by since the declaration, we, as public health professionals feel concerned about the prevailing confusion in the context of use of different terminologies. Although the issue has been addressed in the past by epidemiologists, leprologists and programme managers, we have tried to re look at the technicalities involved in the use of various terminologies pertaining to the containment of leprosy in India in a manner which will be useful for academic dermatologists. [1],[2]

In public health, as far as communicable diseases are concerned, from the very beginning of this discipline all efforts have been directed towards reducing the diseases burden and thereby the human suffering. Accordingly, over a period of time, definitions/parameters/certification systems were evolved to facilitate quantification and documentation of such reduction in the disease burden.

In this context, understanding of a set of operational definitions which have gained international acceptance at the Dahlem workshop are quite useful. [3]

"Reduction of disease incidence, prevalence, morbidity or mortality to a locally acceptable level as a result of deliberate efforts".

"Reduction to zero of the incidence of a specified disease in a defined geographical area as a result of deliberate efforts". Continued intervention measures are required.

"Reduction to zero of the incidence of infection caused by a specified agent in a defined geographical area as a result of deliberate efforts". Continued measures to prevent re-establishment of transmission are required.

"Permanent reduction to zero of the worldwide incidence of infection caused by a specific agent as a result of deliberate efforts". Intervention measures are no longer needed.

However, despite the availability of epidemiologically quantifiable and objective definitions, these words are often used loosely, interchangeably and inaccurately in the international literature and in the national programmes related documents.

Since deliberate efforts are required at local, national and international level for control, elimination or eradication of diseases, it amounts to deployment of lot of resources, both at local and national level. This becomes an important issue for resource constrained countries like India. Therefore, initiation of control/elimination/eradication programme is a serious business. In this context often stringent criteria for eligibility of any disease for eradication have been established. A disease fulfilling the three major criteria can be considered as candidate for eradication programme. [3],[4]

The major criteria have been further spelt out by the International Task Force for Disease Eradication [Table - 1]. International Task Force for Disease Eradication evaluated over 90 potential diseases based on these criteria and concluded that only six were eradicable in which leprosy is not included. [3],[5] This questions the rationale of naming our national programme as ′National Leprosy Eradication Programme′. It seems that the social and political considerations have taken an upper hand for such a declaration. 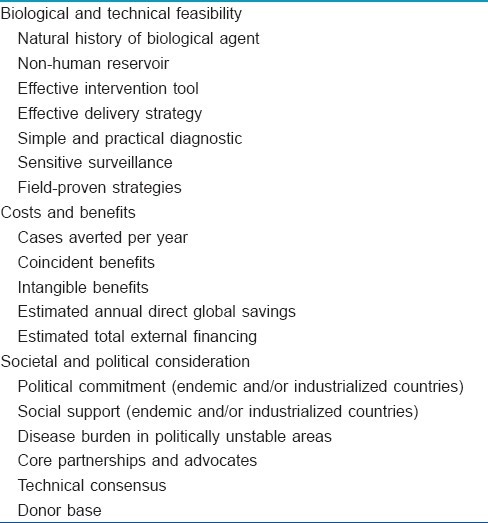 Table 1: Criteria developed by the International Task Force for Disease Eradication and modified by the Dahlem conference[3]

Though the target of leprosy elimination was achieved at national level in 2006, a large proportion of leprosy cases reported globally still come from India. In 2009, of the 244796 new cases reported globally, 133717 were detected in India. Among them more than 10% were children which strongly indicate that active transmission is occurring. [7] The reduction in registered prevalence is, therefore, clearly not based only on a declining incidence, and can be explained by the shortening of treatment duration and cleaning of the registers. [8]

The combination of biological and epidemiological evidence suggests that the leprosy cannot be eliminated by Multi Drug Therapy alone as the microbiology of leprosy is still not fully elucidated. [9],[10] Leprosy should be grouped under the chronic stable diseases that are being successfully controlled. [11]

Though the World Health Organization elimination goal created enthusiasm and optimism which galvanized people to work efficiently against the disease, it seems that, actually now, they are hiding the reality. In fact, the prospect of elimination has also discouraged the research in the field which is the need of the hour. The evaluation report by Global Alliance to Eliminate Leprosy recommended that the WHA should pass a resolution that makes it clear to the world that leprosy had not been eliminated. [9],[12],[13],[14]

Eradication of leprosy may be a politically desirable aspiration but the scientific case for such a strategy cannot be justified at the moment. [15] Major research advances in developing new diagnostic and epidemiologic tools, chemo prophylactic regimens and vaccine are needed to develop an eradication strategy. [16] It might be more productive to work towards overcoming our knowledge gaps with regard to leprosy microbiology and therapy.

The current reality is that there is a need to sustain and provide quality leprosy services to all persons through general health system, including good referral system. Efforts need to be made to reduce deformity through early detection, self care, physiotherapy and reconstructive surgery and developing sound surveillance systems. [15]

The decision regarding declaration of strategies pertaining to eradication, elimination or control of a disease should be left to scientific scrutiny and techno-managerial considerations. The approach should be thoroughly professional and scientific. Only political spicing or value addition in the form of "a strong political will" or "political commitment" may be desirable.

Our humble submission is that the public health scientists, programme managers and physician scientists etc should recognize and use the terminology in letter and spirit which shall be useful in facilitating the efforts in the containment of the disease.