Nail dyschromia or chromonychia is defined as an abnormality in the color of the substance or the surface of the nail plate or subungual tissue. [1] The discoloration specifically due to the deposition of melanin is labeled as nail pigmentation. [2]

Discoloration of the otherwise transparent nail may be due to a large number of factors affecting the nail plate, nail attachments, or the underlying substance. [3] The pigments responsible for nail color alteration may be deposited either exogenously (occupational exposure, henna) or may be a result of over production or storage of some endogenously derived pigments. There are innumerable causes of nail dyschromias, but a fair idea about its anatomical origin and involvement of the concerned part of the nail apparatus can be made by a good history taking and examination of the nail. Nails should always be examined under natural light with the hands in relaxed position. A slight pressure over the tip of the nail plate usually blanches the discoloration which is a result of altered vasculature of the nail bed, whereas if the abnormality is in the nail plate, the discoloration persists as such. Transillumination using a pen torch placed against the pulp of the finger helps in pointing out the abnormalities in the nail plate especially markings on the plate, pitting, subungual thickness, onycolysis, to name a few. These are readily differentiated from the diffuse homogenous reddish glow of the normal nail plate. [4]

All the nails, including finger and toe nails, should be always examined in totality apart from the affected nail. It should be kept in mind that any systemic disorder will affect many or all the nails simultaneously, whereas a localized factor like infection or localized tumor causes nail changes in a single or limited number of nails. In addition, a quick but thorough cutaneous and mucosal examination is desired as these may many a times provide an important clue to an underlying disease. Few morphological changes might occur otherwise in an apparently normal healthy individual. An idea of this may help avert unnecessary work up in these individuals.

The common patterns of abnormal nail coloration or dyschromia includes:

Opaque white discoloration of nail or leukonychia is the most common form of nail dyschromia. Leukonychia has been classified into three different types: true leukonychia, apparent leukonychia, and pseudoleukonychia.

A defect in nail matrix giving rise to white discoloration of nail plate is called true leukonychia. It arises due to disorganization of the keratin fibrils and diffraction of light, hence the white opaque appearance. [1] True leukonychia is further divided into subtypes depending on the extent and pattern of involvement.

The complete and incomplete forms of true leukonychia more commonly denotes a systemic disorder [Table - 1], whereas the transverse and punctate forms are more commonly due to localized trauma. [1],[7],[8],[9] 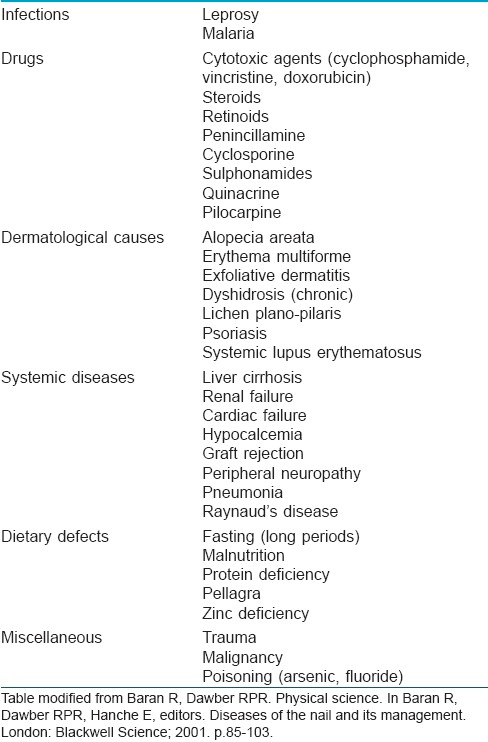 The white appearance of the nail plate may at times be due to the changes in the nail bed vasculature or substance which alters the translucency of the nail plate. Apparent leukonychia is also known as leukopathia. [1]

Melanonychia is the black-brown discoloration of the nail due to the deposition of melanin [Figure - 3]. Melanin in the nail plate most commonly has the appearance of longitudinal pigmented band, known as longitudinal melanonychia. This term is reserved for the band appearing in the matrix region and extending to the tip of the finger. [2] Total or transverse melanonychia have a much rarer presentation.

Melanonychia develops either due to the melanocyte activation or melanocyte hyperplasia. The various causes of melanonychia are mentioned in [Table - 2]. The black pigmented striations on the nail are a common finding among skin types V and VI affecting nearly 15-20% Asians and as high as 70% African-Americans above the age of 20 seen more frequently in the digits used for grasping or in those prone to trauma. [2] 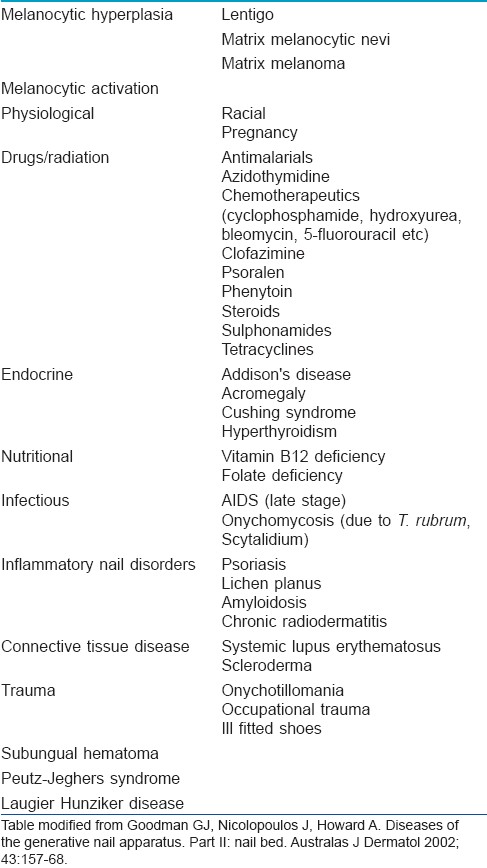 A presentation with longitudinal melanonychia should raise an alarm in the direction of subungual melanoma. A proper history and complete cutaneous examination is essential in cases of melanonychia to differentiate subungual melanoma from many other commoner benign cause of melanonychia. Hutchinsons′ sign, an indicator of subungual melanoma, is defined by the presence of periungual extension of pigmentation from nail bed and matrix to the proximal and lateral nail folds and cuticle. Pseudo Hutchinson′s sign may arise in three types of settings. Firstly, periungual pigmentation may be present in benign conditions like racial predisposition, malnutrition, congenital nevus, Peutz-Jeghers syndrome etc. Secondly non melanoma tumor like Bowen′s disease may present with periungual pigmentation. Lastly, at times pigments in matrix and nail bed are visible through the translucent and uninvolved cuticle, creating Pseudo-Hutchinson sign.

Yellow discoloration of the nail could be a normal finding in elderly or develop secondary to jaundice, carotenemia, ochronosis or systemic drugs like hydroxyurea (yellow-brown discoloration), tetracycline, penicillamine, antimalarials, gold. [15] [Figure - 4] Few dermatological conditions which may give rise to yellow discoloration of nails include onychomycosis, psoriasis, and alopecia areata.

Yellow nail syndrome (YNS) is a rare condition of uncertain aetiology characterized by slow growing nail, yellow-green discoloration obscuring the lunula, and increased lateral curvature. Other characteristic nail findings in YNS include absence of cuticle, thickened nail plate and subungual hyperkeratosis, increased incidence of paronychia, and eventual nail loss. Yellow nail with few of these nail changes are a must to qualify as YNS. Patients present with dirty yellow nail with difficulty in fine object manipulation. The yellow discoloration is due to the deposition of lipofuscin. [16] Few authors suggest a clinical triad of yellow nail, lymphedema and pleural effusion, with at least two of these to be present, as a prerequisite to label as YNS, [17] whereas few others disagree. [18] Many other cardio pulmonary abnormalities have also been found to be associated with YNS. These include bronchiectasis, chronic bronchitis, cystic lung disease, rhinitis, sinunitis, pericardial effusion, and chylous ascites. Impaired lymphatic flow is considered the pathogenic factor responsible for both pulmonary and nail abnormalities. [19] Few suggest that YNS is related to protein leakage from increased micro vascular permeability which also accounts for its association with hypoalbuminemia. Other reported associations of YNS include rheumatoid arthritis, immunodeficiency states including AIDS, mycosis fungoides, carcinoma breast and gall bladder, nephrotic syndrome, and thyroid disease. [15]

Spontaneous recovery in nail changes have been reported to vary between 5% to 30% in various studies, though this is often incomplete and relapse are common. [20],[21] Various treatments have been described for nail changes in YNS with varying efficacy. Proximal matrix intralesional triamcinolone have shown partial response. [22] Topical and oral vitamin E 800 U for 12-18 months is thought to be effective due to its antioxidant role thereby reducing lipofuscin deposition and by increasing the nail growth rate. [15],[23] Oral zinc 300 mg has shown result in one case report. [24]

Blue discoloration of nails is most commonly drug induced. Minocycline causes bluish discoloration of the nail bed with sparing of lunulae in association with cutaneous and mucosal discoloration. This is said to be caused due to dermal deposition of iron chelates. [25] Antimalarials cause blue brown discoloration probably due to the deposition of melanin and hemosiderin. [26] Chemotherapeutics like cyclophosphamide, doxorubicin, and bleomycin cocktail therapy causes blue chromonychia due to matrix melanocyte activation. Similar discoloration is also reported with the use of azidothymidine for AIDS. [15]

Transient bluish discoloration may indicate a cyanotic nail or methemoglobinemia

Red discoloration of the nail may be limited to lunulae or involve nail bed either longitudinally or diffusely. Red lunula is seen in psoriasis, alopecia areata, systemic lupus erythematosus and trachyonychia, apart from many other endocrine, gastrointestinal, cardiovascular, neurological, rheumatic, and infectious disorders. Longitudinal erythronychia is characteristically present in Dariers′s disease, but many other disorders may at times present with longitudinal erythronychia. [1] Various causes of the same is mentioned in [Table - 3]. Psoriatic ′oil spots′, lichen planus, glomus tumour, hematomas and carbon monoxide poisoning may present as red discoloration of the nail bed. Splinter hemorrhages may present as red-brown lines running along the length of nail. 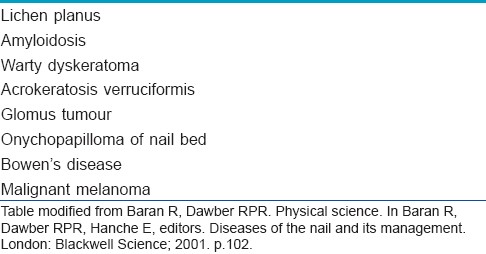 Nail or periungual infection by Pseudomonas aeruginosa may give rise to a green-yellow discoloration of the nail apparatus due to the deposition of pyocyanin or fluorescein [Figure - 6]. The diagnosis can be made by soaking the fragments of nail in water or chloroform. If these turn green, it reflects that the discoloration is most likely due to pseudomonal infection. [1]

Fungal chromonychia: Fungal infection of the nail apparatus or onychomycosis may lead to various types of discoloration depending on the species of fungus involved [1] [Table - 4]. Superficial white onychomycosis gives rise to pseudo leukonychia. 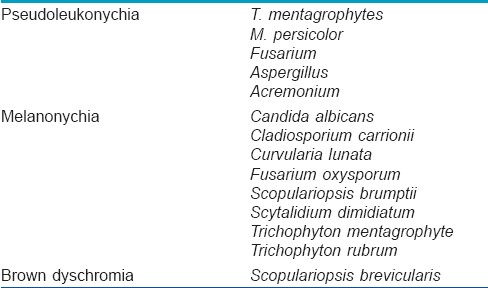 Table 4: Various types of dyschromias due to onychomycosis[1] 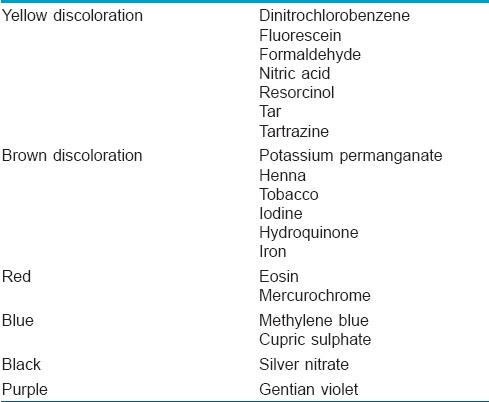 Table 5: Patterns of discoloration due to exogenous agents

Thus, we see that a small apparatus like nail can help unravel a large number of systemic and local disorders and be a pointer towards many disease processes which may not otherwise be apparent. Therefore, examination of nail should always be a part of routine cutaneous examination and presentation with nail dyschromias should be worked up with the help of a good history and examination and few easy bed side tests which may help in reaching the diagnosis with relative ease and little invasion.