The intricacies of impact factor and mid-term review of editorship

Is impact factor (IF) of a journal like Mumbai stock market exchange - based on buyers and sellers? The buyers and sellers decide the stock exchange value of any company based on its popularity, the consumer′s requirement and future prospects. Similarly, the IF of a journal depends upon its popularity in the world of scientific literature, the contents of the journal, especially the originality of the article, how it is valued in the world literature, and how significant are its findings. Generally, the clinical journals have a lower IF than the biochemistry, genetic and immunology journals. Even the IF of the clinical journals in dermatology, which have been running for years together, is just hovering around 1, for example, the IF of International Journal of Dermatology is 1.265, Pediatric Dermatology is 1.117, Journal of Dermatology is1.355, Clinical and Experimental Dermatology is 1.267, as of 2010. The word "impact factor" has become a common parlance among the members of the scientific community and today its usage has become a double-edged sword, and hence the discussion on its intricacies.

Eugene Garfield, the founder of the Institute for Scientific Information (ISI), proposed in 1955 a bibliographic system for scientific literature - "Citation Indexes for Science" - which was initially developed for cross-reference literature searches and identification of individual scientists working on particular topics. [2] In the early 1960s, along with Irving H. Sher, Eugene Garfield created the journal IF to help select journals for the Science Citation Index (SCI). [3] The term "impact factor" was first used in 1961, later same used in a publication in the SCI in 1963. [4] A journal′s IF is based on two elements: the numerator, which is the number of citations in the current year to any items published in a journal in the previous 2 years, and the denominator, which is the number of substantive articles (source items) published in the same 2 years. [3] The IF is calculated by the ISI, which is a part of the Thomson company, and is basically a by-product of computerized databases of the Social Science Citation Index (SSCI) and the SCI. [4] The IF of a journal A in a particular year Y is computed using the formula: [2]

By ISI definition, only research articles, technical notes and reviews are "citable" items. Editorials, letters, news items, and meeting abstracts are "non-citable items" for the purpose of calculating the denominator. All items, however, may be counted in the numerator during the calculation. [2]

The calculation of the IF is biased by many factors - coverage and language preference of the SCI database, procedures used to collect citations at the ISI, algorithm used to calculate the IF, citation distribution of journals, online availability of publications, citations to invalid articles, negative citations, preference of journal publishers for articles of a certain type, publication lag, citing behavior across subjects, and possibility of exertion of influence from journal editors. [2] Thus, IF is associated with inherent as well as technical flaws and the technicalities used in its calculation are unrelated to the scientific quality of the articles.

IF was primarily used as a bibliographic research tool for retrieval of overlapping research for the benefit of scientists who worked in relative isolation to contact colleagues with comparable interests and later it was also used as a research tool for the social sciences. [5] But recently, IF has taken a turn for the worse as it is being used for purposes for which it was not intended. The prime aim of Eugene Garfield when he proposed IF was to eliminate the uncritical citation of fraudulent, incomplete, or obsolete data by making it possible for the conscientious scholar to be aware of criticism of earlier papers. But it has done little to reduce the citation of fraudulent data and several studies have shown that retracted articles continue to be cited and are still being used to calculate the IF. [6],[7]

As IF is easily available, it is used as a measure of the quality of work of (groups of) scientists, and hence it is a recent trend to use it as a parameter for hiring, tenure promotions, academic promotions and research grant policy. [6] Hence, authors are forced to publish their research in journals of high IF at the cost of a specialist journal (which may be a national journal rather than an international one) that might actually be more appropriate to publish their work as their quality of research is being judged by the cover and nationality of origin rather than the content. On the flip side of this, we find that journals are being designed in such a way so as to make it citable than to make it readable putting forth the needs of researchers before the needs of ordinary doctors who far outnumber researchers as readers, which might result in a rise in IF but with a decline in the readership. [7] For example, in India, there is hardly a readership for Journal of Investigative Dermatology and British Journal of Dermatology.

But it has been observed in various studies that IF is a valid assessment of the quality of the journal, but not valid for the assessment of the quality of a paper or an individual scientist or a group of scientists. [5] Also, the IF of a journal is not statistically representative of its individual articles [8] and article citation rates determine the journal IF and not vice versa. [9]

One should also remember who the custodians of the SCI database are, and hence their natural preference for the English language journals resulting in a low IF for the few non-English journals that are included. Also, the poor language skills of non-English speaking researchers often affect the citation rate of their article. [2],[6]

Apart from this, another major fact that needs to be considered is that the publication priority for major impact journals may not be the same as that of one′s own country, and hence the need to publish one′s work in his/her own national journal to create awareness among colleagues and offer solutions to problems which might be of relevance there. In this way, national journals can have quality papers thereby maintaining high standards from active support of scientists doing quality research. [10]

Different professional groups need to take into consideration the inherent limitations of the IF. Librarians should use it to identify multidisciplinary journals, as a higher IF hints at wider acceptance of the journal. Editors and publishers must publish valid articles without attaching much importance to the possibility of a potentially high citation count. When deciding on the journal for submitting their article, authors should concentrate more on how well the manuscript′s topic fits the journal, the actual circulation numbers, potential readership and finally the perceived reputation of the journal (often equated with the IF). [2]

Hence, it is high time for authors to realize that IF is a misleading tool in assessing the quality of a paper or the researcher. They should make guarded use of this bibliometric measure which has become a widespread subject of controversy even for Garfield, the man who created it. In Garfield′s own words "I first mentioned the idea of an impact factor in 1955. At that time it did not occur to me that it would one day become the subject of widespread controversy. Like nuclear energy, the impact factor has become a mixed blessing. I expected that it would be used constructively while recognizing that in the wrong hands it might be abused."[3]

In the last year editorial, I had given a sermon on first IF of the journal. [11] Fortunately or unfortunately, this year (2010), IF became lower than it was in the previous year (2009). Naturally, it was a cause for worry and I was thinking in my mind why it happened so. Indian Pediatrics also met with the same fate as ours and I thought to look into the literature to find intricacies of the IF. Herewith, I present to you the performance of Indian Journal of Dermatology, Venereology, and Leprology (IJDVL) for the month of November-2011 [Table - 1] and [Table - 2]. 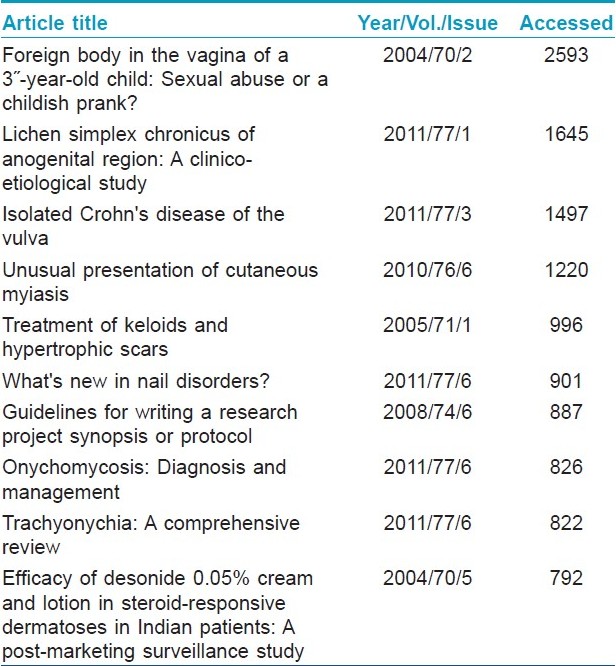 A large part of the success of the IJDVL has been due to the persevering efforts of my colleagues in the editorial board, our revered reviewers who give inputs without any rewards, and Dr. D. K. Sahu and his dedicated team at Medknow Publications and Media Pvt. Ltd. The IJDVL manuscript submission site is being upgraded continuously by them and I am sure you must be happy with the new features added to the website. Now, in the table of contents, most cited, most downloaded and search pages have become common features. Some of the articles have been labeled as "Popular" articles. Website has been optimized for mobile devices.

My thanks are due to all our sponsors for the 2011 print version, especially Gracewell, Galderma India Pvt. Ltd., Glaxo SmithKline (GSK), Dr. Reddy′s laboratories Ltd., and Timpac Health Care Pvt. Ltd., for their financial backing of this scientific activity. Special thanks to Systopic Labs Pvt. Ltd. for sponsoring mailing of IJDVL to our IADVL members and Galderma India Pvt. Ltd. for sponsoring the website http://www.ijdvl.com.

For the year 2011, IJDVL has introduced three more prizes for the best case report, best letter to the editor, and best images in clinical practice for Indian authors only. So, the award for the best case report in 2011 goes to the article "Generalized eruptive histiocytosis mimicking leprosy" by Drs Sharath Kumar B. C., Nandini A. S., Niveditha S. R., Gopal M. G., Reeti (Indian J Dermatol Venereol Leprol 2011;77:498-502); the award for the best letter to the editor goes to Dr. Ratnavel G. R. for his letter titled "Foam sclerotherapy in various vascular and lymphatic malformations" (Indian J Dermatol Venereol Leprol 2011;77:336-8), and for best images in clinical practice to Drs Inamadar A. C., Palit A. for their "′Nipple pacifier′ like blister over middle finger" (Indian J Dermatol Venereol Leprol 2011;77; 710). They get a certificate with cash awards from IJDVL for

2000/-, respectively, by check payable at par at all branches as incentive to publish their best research work in our journal. Last but not the least, I thank all the contributors for their unstinted support during the year, which is pivotal to the continued success and visibility of our journal.

I take this opportunity to wish all of you a very happy, healthy and prosperous new year!