Pattern of skin diseases in Kumaun region of Uttarakhand

India is a large country with diversity in social, economic, racial, geographic, and environmental factors; therefore we have different patterns of skin diseases in various regions of the country. A number of workers have reported pattern of skin diseases in different areas from India, but there is no such report from Uttarakhand so far. Uttarakhand state, which is situated in northwest region of India, is divided in two regions, namely, Kumaun and Garhwal. Kumaun division is comprised of six districts, namely, Nainital, Almorah, Bageshwar, Champawat, Udham Singh Nagar, and Pithoragarh. Government Medical College, Haldwani (Nainital) is one of the referral centers for Kumaun division. The average rainfall in Uttarahkand is 1397.0 mms and temperature varies from -2.7 °C to 41.5°C. There is forest area of 34651 sq. km out of 53483 sq. km geographical area. It is a hilly state with many districts situated at an altitude of 2000 m or above. Humidity is low. About 75% population is involved in agricultural or forestry work. To know the pattern of skin diseases in this region, the data of all the new skin patients attending the skin OPD during the period of 5 years starting from 1 st January 2006 to 31 st December 2010 was analyzed retrospectively from outpatient registers. The demographic profile of these patients including age and sex distribution was noted. Diagnosis of various skin diseases was made on clinical grounds and relevant investigations were done whenever required. 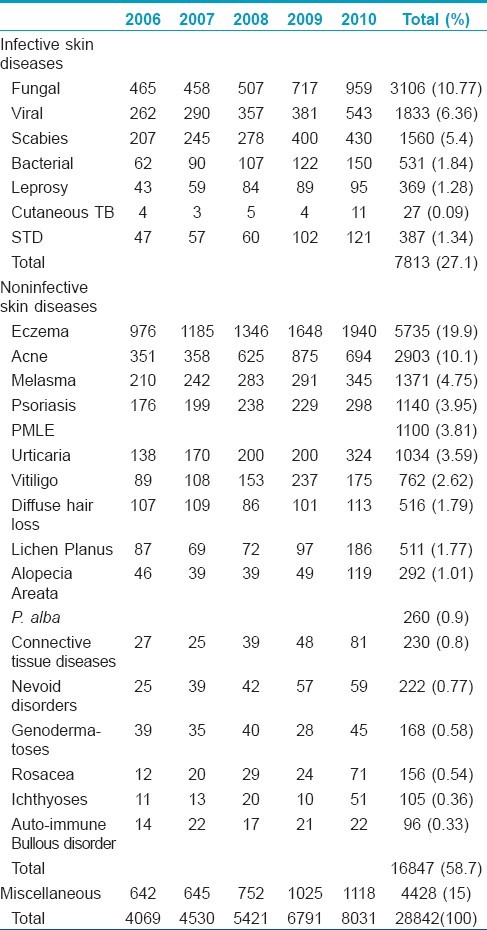