Pemphigus and pregnancy: A 23-year experience

Background: Studies on the interaction of pemphigus and pregnancy are limited to case reports and small case series. Pregnancy is not rare in Iranian pemphigus patients due to lower age at onset of the disease. Aim: We sought to investigate the outcome of pregnancy and the course of pemphigus in pemphigus patients in a retrospective study. Methods: The files of 779 pemphigus women younger than 50 presenting to our center from 1984 till 2006 were examined for any mention of pregnancy. Data related to outcome of pregnancy and the course of the disease were collected. Results: Sixty-six patients with a history of pregnancy were identified. Forty-eight known pemphigus patients experienced one or more pregnancies during their disease (total pregnancy number: 52). The course of pemphigus was as follows in this group: 28 cases (54%) of exacerbation, 15 cases (31%) with no alteration, and 9 cases (17%) showing improvement. The rate of abortion was 9.6% (5 cases). In 18 cases, the disease had started during pregnancy, 2 of them (11%) ended in an abortion. Overall, postpartum flare was seen in 33 cases (47.1%). Conclusion: Pemphigus may be exacerbated during or after pregnancy, but often to a mild degree. Although the rate of stillbirth was not as high as previously reported, the rate of abortion was considerable. Pregnancy may have an uneventful course, especially in patients in clinical remission; nevertheless, careful monitoring of the high risk mother and fetus is mandatory.
Keywords: Pemphigus, abortion, pregnancy

Pemphigus is a group of chronic autoimmune bullous diseases of the skin and/or mucosae characterized by the presence of desmoglein 3 and/or 1 antibodies. The interaction between pemphigus and pregnancy can be evaluated from four different aspects: [1] (1) transplacental transfer of antibodies and pemphigus in the neonate; (2) possible adverse effects of drugs transferred to the fetus; and (3) possible alteration of the course of pemphigus due to the immunologic and hormonal alterations seen in pregnancy; (4) the effects of the presence of a severe maternal disease on the fetus. As pemphigus is a rare disease affecting mostly women of the 5 th and 6 th decades in Western countries, [2],[3] studies on the association of pemphigus and pregnancy in the literature are limited to case reports and small case series not exceeding more than 47 pemphigus vulgaris (PV) cases. [1],[4],[5],[6],[7] Accordingly, many aspects of this topic are still unclear.

Pemphigus is known to be especially common in Iran with a female to male ratio of 1.5:1 and a mean age at onset of 42 years. [8] This peculiar epidemiologic pattern of the disease and a large number of female pemphigus patients in the childbearing age is also seen in India. [9],[10],[11] This setting provides a good opportunity for studying pregnancy in pemphigus.

We sought to investigate the outcome of pregnancy and the course of pemphigus during pregnancy in a 23-year retrospective study on pemphigus patients.

In this retrospective study, approved by the Research Committee, the files of 1851 pemphigus patients presenting to the Bullous Diseases Research Center, Tehran, Iran, from 1984 till 2006 were reviewed; the diagnosis of pemphigus was based on clinical features and histopathologic findings (intraepidermal cleft and acantholysis).

Seven-hundred seventy-nine women with disease onset lower than 50 years old were identified. Their medical records were examined thoroughly for any mention of pregnancy. The patients were divided into 2 groups based on whether their disease had started during pregnancy or had experienced a pregnancy after the diagnosis of pemphigus.

A questionnaire including demographic data, type of pemphigus, course of disease during and after pregnancy, outcome of pregnancy, and treatments was filled in for each patient. Patients were asked by phone call or interview for any missing information. Worsening was defined as the appearance of new lesions in lesion-free patients or increasing number of lesions in patients with active disease regardless of number and site.

Onset of pemphigus before pregnancy

The characteristics of this group are presented in [Table - 1]. This group comprised 48 women with 52 pregnancies. One patient experienced three pregnancies and two women had two pregnancies. Pemphigus exacerbated in most pregnancies (n=28, 53.8%); 5 of them (17.8%) followed intentional discontinuation of the drugs by the patient. After exclusion of the 5 patients who stopped treatment, the results on the 47 remaining patients were as follows: 23 cases of exacerbation (49%), 15 cases of no alteration (32%), and 9 cases of improvement (19%). 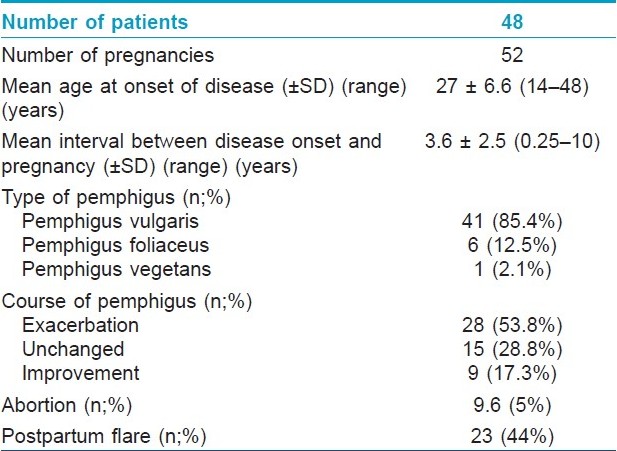 In 21 cases of aggravation, the flare was mild and optimal treatment was achieved by a small increase in dose of prednisolone, adding a small dose of prednisolone or adding topical steroids. The disease was controlled by 40-60 mg prednisolone in 6 cases and in only one patient prednisolone 100 mg was needed. In the three patients with multiple pregnancies, pemphigus was less severe or did not occur in their later pregnancies. In two patients with 2 and 3 pregnancies, relapse was seen only in the first pregnancy. In the other patient a severe relapse was seen in the first and a milder relapse in the second pregnancy.

Abortion occurred in 9.6% (n=5), one of them was therapeutic. In three of the four remaining cases (75%), pemphigus worsened, while the disease remained unchanged in one case. Among these 5 cases, 4 cases (80%) had PV and one patient was a known case of pemphigus foliaceus (PF).

One case of stillbirth, one newborn with meningocele, one case of neonatal pemphigus and one newborn with intrauterine growth retardation were noteworthy in this group [[Table - 2]: cases 1-4]. Four out of 32 patients with known delivery status had preterm labor.

Onset of pemphigus during pregnancy

Table 3: Characteristics of pemphigus patients with disease onset during pregnancy

To our knowledge this report is the largest series of patients with pemphigus in pregnancy. Our study confirmed that the disease may be aggravated during pregnancy, although to a mild degree. Postpartum flare and abortion were other important findings.

Successful pregnancy is generally considered a Th2 state, which prevents rejection of the immunologically foreign fetus. [12] The clinical course of immune-mediated diseases may be positively or negatively affected during pregnancy. While rheumatoid arthritis (a Th1-mediated disease) is considered as a prototype of diseases ameliorating during pregnancy, [13] systemic lupus erythematosus (a Th2 disease) may be exacerbated in 60% of cases. [14],[15] Likewise, it is suggested that the physiologic stimulus of pregnancy may precipitate or aggravate pemphigus. [4],[12],[15],[16]

We observed worsening of disease in 54% of known cases of pemphigus during pregnancy. Nevertheless, relapses were not of great severity and were generally controlled by topical or small doses of steroids. Furthermore, it has been suggested that pemphigus tends to worsen during the first or second trimesters or immediately during the postpartum period. [17],[18],[19] Similarly in our study pemphigus began in the first two trimesters in the group of patients whose disease started in pregnancy. It has been speculated that rising endogenous corticosteroid production by the chorion and consequent immunosuppression is the reason for amelioration of pemphigus during the third trimester. [17] Postpartum flare was another remarkable finding in our series. This may be due to the rapid decline of chorionic corticosteroids after delivery. Overall, according to our study, the impact of pregnancy on the clinical course of pemphigus was not as unfavorable as generally thought. In the recent review of reported cases of PV, exacerbation of the disease was reported in 11 (22%) of 49 cases. [1]

Poor neonatal outcome is generally considered to be associated with severe maternal disease and high serum level of antibodies. [20],[21] An oddly high rate of 27% is frequently cited for stillbirth in pemphigus during pregnancy in old literature. [22],[23] In a recent review of all reported cases of PV and pregnancy in the English literature in Pubmed, the authors reported the rate of stillbirth to be 10% (5 out of 49 patients) and a perinatal mortality of 12% (6 cases). [1] In contrast to these high figures, pregnancy ended to stillbirth in only one of our cases (1.4%). Postnatal death was also seen in one case (1.4%). The previously reported high figures are mostly due to the preferential report of severe cases. Therefore, it seems that stillbirth in pemphigus is not as frequent as previously thought. At last, the rate of abortion was considerable in our series. Totally, we observed 7 (9.7%) abortions two of them were due to trauma and therapeutic purpose. Four of them were associated with exacerbation of disease. To the best of our knowledge, this pregnancy outcome was not studied previously. It is worth mentioning that 7.5 abortions per 1000 married women aged 15-49 years is reported from Iran. [24]

Neonatal pemphigus is a rare complication of pregnancy in pemphigus patients. To our knowledge only 29 cases of neonatal pemphigus have been reported in the literature. [18],[25],[26] In our series we found only one case of neonatal pemphigus (1.4%) born to a mother with mild oral PV. Her skin bullae resolved after a few weeks. In most reported cases, PV/vegetans was the underlying maternal diagnosis (26 out of 29 cases). [18],[25],[26] Only three cases of PF are yet to be reported. [27],[28],[29] It is postulated to be due to the different distribution of Dsg 1 and 3 in neonate and adult skin and mucosae. [30] Most neonates had skin rather than mucosal lesions. [18] The maternal disease was not always severe; it may be mild as in our case or even inactive. [5],[31],[32]

Although there is no prospective or cohort study defining the best drug regimen during pregnancy in PV, prednisolone and azathioprine are considered safe therapeutic options in this context. [20] Topical steroids and intralesional steroid injection (triamcinolone acetonide 10-20 mg/mL around the lesion) can be used in mild cases. Dapsone and plasmapheresis are other therapeutic modalities mentioned in the literature. [1] IVIg may also be used safely during pregnancy if needed. [1] In our practice, prednisolone was the most frequently used drug and azathioprine was used only in the most severe case. Interestingly, azathioprine was not used in any of the five cases with poor neonatal outcome. In addition, almost all patients with onset of pemphigus during pregnancy who did not receive treatment experienced severe worsening of the disease after delivery. Accordingly, we recommend that treatment of pemphigus should not be delayed during pregnancy (or postponed to the postpartum period). At last realistic counseling of known PV patients before conception is of much help.

Major limitations of this study were mostly related to its retrospective nature. The frequency of pregnancy in our study may have been underestimated, as many patients may have not reported their pregnancies, especially when in clinical remission. On the other hand, the etiology of adverse events of pregnancy could not be investigated in this study.

In conclusion, this study showed that pemphigus may be exacerbated during or after pregnancy, but generally to a mild degree. Although the rate of stillbirth was not as high as previously reported, the rate of abortion was considerable. Overall, the outcome of pregnancy was not as dreadful as what is reported in the literature. Pregnancy may have an uneventful course, especially in patients in clinical remission; nevertheless, careful monitoring of the high risk mother and fetus is mandatory.