Pheohyphomycosis: A curious case of cyst

Many fungi causing human disease may be melanized and are known as “dematiaceous fungi.” Pheoid fungi may cause clinical syndromes ranging from insidious cutaneous disease to life-threatening infections involving the central nervous system.[1] When these fungi cause subcutaneous infections, it is known as pheohyphomycosis. Melanin acts as a virulence factor for the fungus as it has scavenging properties and protects it from phagocytosis by neutrophils owing to which the fungus can cause disease in the immunocompetent host as well.[2]

Exophiala spinifera is a rare cause of cutaneous infection manifesting as pheohyphomycosis or chromoblastomycosis mainly in tropical and subtropical regions of the world. There have been only a few case reports of the agent causing cutaneous pheohyphomycosis from India.[3],[4],[5],[6] It is uncommon for the disease to be multifocal, particularly in an immunocompetent individual.[7]

A 15-year-old girl, resident of Uttarakhand presented to our outpatient clinic with a 5-month history of multiple, asymptomatic, skin-colored cysts over both sides of the neck along the sternocleidomastoid; simulating enlarged lymph nodes [Figure - 1]a. Similar lesions had been observed two years ago which had resolved with atrophic scarring. The cysts were multiple but discrete, with diameter ranging from 2 to 4 cm. The overlying skin was normal, with no warmth or tenderness. The largest cyst present over the left scapula measured 10 × 8 cm in size [Figure - 1]b and was non-tender, fluctuant and negative on transillumination. On the back there were multiple discrete to coalescent, oval, hypertrophic scars, some atrophic areas and some sites of depigmentation at the site of previously healed lesions. During the last episode, no confirmed diagnosis was made, but on a clinical suspicion of deep fungal infection, she was given oral itraconazole 200 mg per day for 6 months with significant improvement, after which the treatment was stopped. There were no associated comorbidities and the systemic examination was normal.

The long duration and asymptomatic nature of the lesions prompted us to consider differentials of mycobacterial or fungal infection.

Pus aspirated from the cystic cavity along with tissue was sent to the mycology department for culture (Sabouraud dextrose agar; 28°C and 37°C). The 10% potassium hydroxide mount showed septate branching hyphae and Sabouraud dextrose agar grew yeast-like dark-pigmented colonies after 5–7 days of incubation both at 28°C and 37°C. Slide cultures on potato dextrose agar for the micromorphology revealed septate, brown, long, annellophores along with obovoidal annelloconidia. On the basis of macro- and micromorphology and polymerase chain reaction analysis the isolate was identified as E. spinifera. On the basis of clinical, pathological and microbiological findings, we made a diagnosis of multifocal cystic pheohyphomycosis.

The patient was given itraconazole 100 mg twice a day the larger cyst was aspirated and a drain kept in situ for 3 days. The patient has received 8 months of itraconazole with marked improvement. We plan to continue itraconazole 200 mg a day for 18–24 months.

The clinical manifestations of pheohyphomycosis may be protean; cutaneous, subcutaneous, cystic or disseminated. The presence of melanin in the hyphal cell wall gives it the name “black mold.” E. spinifera may clinically present both as pheohyphomycosis as well as chromoblastomycosis. The distinguishing feature between the two is the presence of “Medlar” or copper penny bodies on histopathology in chromoblastomycosis.

Molecular techniques to detect species have only been in clinical practice recently, hence, on reviewing the literature, E. spinifera was identified as the pathogen causing cutaneous disease in only around 40 cases worldwide.[2] The first description was in 1954 in a young boy from India with chromoblastomycosis due to E. spinifera, since then there have only been five cases of cutaneous disease caused by E. spinifera from India.[3],[4],[5],[6],[7] [Table - 1] All the five descriptions include pheohyphomycotic morphology. Recently, Srinivas et al. have reported a 12-year-old immunocompetent boy from India diagnosed with chromoblastomycosis due to E. spinifera on the lower leg, who in a span of few months developed osteomyelitis and left hemiparesis.[8] 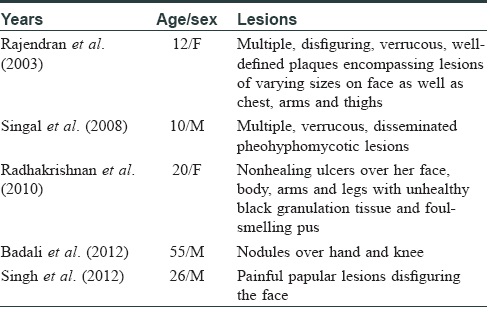 Table 1: Case reports: Pheohyphomycosis due to Exophiala spinifera in India

The disease in our case involved the neck and trunk which are unusual sites as the inoculation of the disease is often by injury over extremities. The disease presented in an immunocompetent young host with chronic, recurring course.

The extensive and recurrent disease with multiple cysts, predominantly truncal involvement in a healthy young girl is, thus, a rare and noteworthy presentation of these uncommon mycoses.

The authors certify that they have obtained all appropriate patient consent forms. In the form, the patient has given her consent for her images and other clinical information to be reported in the journal. The patients understand that their names and initials will not be published and due efforts will be made to conceal their identity, but anonymity cannot be guaranteed.