Phototherapy and photochemotherapy in childhood dermatoses

The concept of phototherapy and photochemotherapy is not new, and sophisticated ultraviolet (UV) treatment modalities are available for almost three decades. However, phototherapy has not been used in children as extensively as in adults, probably due to long-term safety concerns. Photochemotherapy (psoralen plus UVA) is not considered to be safe in the younger age group. UV therapies can be useful treatment options for children with selected dermatological conditions provided they are used under carefully controlled conditions. Presently there is insufficient data available to provide recommendations regarding the safe maximum dose and duration of phototherapy in children. Developments of new UV delivery systems and devices are aimed at improving the safety and efficacy of phototherapy. In this review, we discuss the published literature on phototherapy and photochemotherapy in children, drawbacks of their use in pediatric population and future prospects.
Keywords: Childhood dermatoses, photochemotherapy, phototherapy, treatment

Although psoralen + UVA (PUVA) has been used for vitiligo for centuries by ancient Egyptians and Indians, in modern medicine, the first clinical studies were performed by El Mofty in 1948. [1] In 1974, Parrish reported the useful role of artificial high-intensity UVA lamps and, thus, began the journey of modern PUVA therapy. [2] Fluorescent lamps (Philips TL 01) containing phosphor with peak narrow-band emission at 311 ± 2 nm (narrow-band UVB, NBUVB) was first clinically used by van Weelden et al.[3] and Green et al.[4] for the management of psoriasis in 1988.

Deterrents of Use of Phototherapy/Photochemotherapy in Children

The widespread use of phototherapy and photochemotherapy in children has been inhibited by safety concerns, particularly the risk of carcinogenicity and premature ageing on long-term UV therapy. An increased risk of melanoma and non-melanoma skin cancer (NMSC) is reported in adult patients receiving long-term UV therapy. [5],[6] As there are no such data in children, the information gathered in adults has been extrapolated to children. It has been observed that recurrent or prolonged erythemogenic UV exposure in early childhood increases the likelihood of development of melanoma and NMSC. [7],[8] Halder et al. did not encounter any malignancy in follow-up of 326 patients treated with PUVA for vitiligo. [9] They speculated that the risk of carcinogenicity may be disease specific, as patients with psoriasis requiring higher doses of psoralen and total cumulative dose of UVA for clearance of lesions are likely to be more predisposed. The risk of NMSC is related to patient race and type of phototherapy as well. Caucasians are more susceptible to develop malignancy, particularly squamous cell carcinoma (SCC), following PUVA treatment than Asians and Arabian-Africans. [10],[11]

The carcinogenic potential of PUVA therapy in psoriatic patients have most extensively been studied by Stern et al. in nearly 30,000 person-years. [12] A 100-fold increase in the incidence of SCC was observed in patients who received at least 337 PUVA exposures as compared to the normal control population drawn from the same locality. The risk of malignant melanoma is also increased, which is directly proportional to the degree of exposure. Persons receiving more than 250 exposures and at least 15 years after the first exposure were at an increased risk of developing melanoma. [13] The risk of developing various skin malignancies gets increased if immunosuppressive therapy is prescribed in addition to the PUVA therapy.

Overall, the risk of melanoma/NMSC is higher with all modes of photo/photochemotherapy. The risk is relatively well assessed in PUVA with long-term studies while the exact risk with NBUVB is yet to be determined with long-term data.

The risk of photodamage and carcinogenicity with UVA1 (high dose: 130 J/cm 2 , medium dose: 50-60 J/cm 2 , low dose: 10-20 J/cm 2 ) is not known. Therefore, a majority of the phototherapy experts do not recommend UVA1 therapy in subjects younger than 18 years of age. If used, it should not be more than two cycles yearly, with no more than 15 irradiation exposures per cycle. Patients should be monitored at least once a year for early detection of photodamage or skin cancer. [14]

Another problem is ensuring compliance with eye protection. The British Photodermatology Group recommends post-PUVA treatment eye protection for persons who are undergoing topical PUVA therapy for a dermatosis involving more than 30% body surface area, for systemic PUVA and for those who are being treated for atopic dermatitis (AD) as inherently they have an increased risk for cataract. [15] Therefore, they do not recommend PUVA below 10 years of age. [15]

Last but not the least is the practical difficulties. Healthcare facilities are always a daunting place for the youngsters. It is difficult to convince a small child to enter inside the phototherapy chamber. This problem in treating very young children was circumvented by allowing an attendant to accompany the child inside the phototherapy chamber with long sleeves/pants, protective eyewear on, and sunscreen application on photoexposed areas. [16] As phototherapy are largely hospital based, time consuming and requires regular travel to the healthcare facility, there is significant loss in terms of absenteeism from school for the patients as well as loss of working days for their attendants. 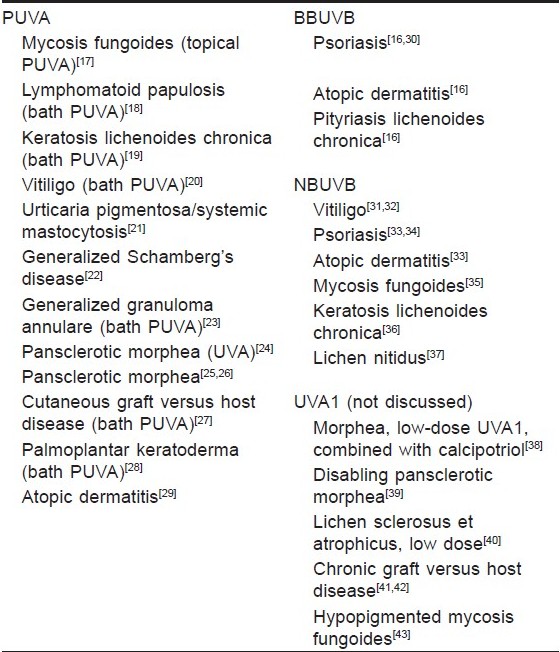 Table 1 :Indications in which phototherapy/photochemotherapy have been used in children

Kanwar and Dogra from India treated 26 children with vitiligo using NBUVB, 20 of whom completed the study period of 1 year. [32] Seventy-five percent of the patients had marked to complete response, 20% had moderate response and 5% had mild repigmentation. Fifty percent repigmentation was achieved after 34 treatment sessions on an average. Perifollicular pigmentation was the prominent pattern observed in 65% of the patients. Most of them had concomitant marginal and/or diffuse pigmentation. Adverse effects were minimal and did not warrant discontinuation of treatment. Twenty percent developed lesional burning or pruritus while 15% complained of xerosis.

Jury et al. reviewed the use of NBUVB in the pediatric population. [33] Of the 77 children (4-16 years) enrolled, 45% had psoriasis and 32% had AD. Other dermatoses treated were alopecia areata, acne, hydroa vacciniforme and polymorphic light eruption. Sixty three-percent of the psoriasis patients had marked improvement while 9% had no improvement. Sixty-eight percent and 16% of the atopics had marked and no improvement, respectively. Of the photodermatoses, response was disappointing in hydroa vacciniforme. Poor response was observed in alopecia areata as well. Median number of treatment sessions was higher for AD compared to psoriasis (24 vs. 17.5). The side-effect profile was similar to that commonly observed in adults: erythema in 30%, blistering in 5%, reactivation of herpes simplex in 2%, and varicella zoster in 1%. They noted that while comparing response to treatment in a particular disease group, adults had a much better response compared to children. The authors hypothesized that the concern for long-term safety might have prevented administration of NBUVB in children with mild or moderate disease. Thus, selection of children with severe disease only for phototherapy skewed the response rate in favor of adults.

The efficacy of NBUVB in psoriasis in adults has been proven and, in comparison to BBUVB, it elicits faster clearance of lesions, fewer episodes of erythema and longer remission. However, large studies on phototherapy in childhood psoriasis are rare. This is particularly true in the Indian context. Jain et al.[34] treated 20 patients with psoriasis (plaque psoriasis 18, guttate psoriasis 2) aged between 6 and 14 years with NBUVB. In a twice-weekly treatment regimen, the mean cumulative dose required for clearance was 4286 mJ/cm 2 (1,687-7,509 mJ/cm 2 ) over a mean number of treatment sessions of 24 (17-30). The highest dose per treatment was 329 mJ/cm 2 (165-462 mJ/cm 2 ). The age of the patients as well as the duration and extent of disease did not influence the cumulative UV dose, highest dose per treatment and number of treatments required for clearance. Over a treatment period of 12 weeks, 60% patients had excellent response, 15% had good response, 5% had moderate response and 10% had no response. Two patients withdrew from the study due to practical difficulties and two developed erythroderma. Mild erythema was observed in 10% of the patients. Within 6 months post-treatment follow-up, only one patient relapsed and required a second course of phototherapy. They concluded that NBUVB phototherapy may be a safe and effective treatment choice for childhood psoriasis ahead of more toxic systemic therapies.

In a recently published side to side comparison study by Jain et al. from India, it was shown that pre-radiation mineral oil application improved the efficacy of NBUVB in treatment of childhood psoriasis. [45] The mean cumulative dose for clearance in the mineral oil pre-treated side was 2,956 mJ/cm 2 compared to 4,088 mJ/cm 2 in the non-pre-treated side. The mean maximum dose and number of exposures for clearance on the emollient pre-treated side were 297 mJ/cm 2 and 20.56, respectively, while the corresponding figures in the non-pre-treated side were 394 mJ/cm 2 and 23.78. This beneficial effect of mineral oil has been attributed to its refractive index, similar to that of stratum corneum, and its ability to penetrate and fill the air-corneocyte interfaces thus decreasing backscattering or reemission of the incident light. This observation was not supported by another study and thus needs further evaluation. [46] However, it is not clear from their study how the lesion-free side was protected from exposure to NBUVB when the other side was still being treated.

This review has certain limitations. The relevant literature reviewed is not robust, most of which were retrospective studies with short post-treatment follow-up. Indication of the use of phototherapy/photochemotherapy and selection criteria based on the severity of disease was not uniform. Varied criteria were used to assess response to treatment.

Targeted phototherapy (concentrated/focused phototherapy, microphototherapy) is the most recent and promising method of delivery of light, in which the light energy is directly focused on the lesion. Many of the problems associated with phototherapy in children can be circumvented by the use of this modality. Uninvolved areas are not exposed and hence remain free of immediate and long-term potential side-effects of UV light. Delivery of light energy is quick and supraerythemogenic doses can be used. In this manner, duration of individual treatment sessions can be decreased and remission can be achieved faster. [47] These new methods and devices are aimed at improving the safety and efficacy of phototherapy. As the machine is hand-held, it may be less frightening to a young soul. However, there are certain disadvantages, e.g. cost of treatment, and it cannot be used in dermatoses involving extensive body surface area (>10%).

Phototherapy has a useful role, particularly in the treatment of psoriasis, vitiligo and AD. The concern of phototherapy causing premature aging or carcinogenesis in younger individuals has not been yet adequately addressed. As of today, if phototherapy is indicated for a particular dermatosis, NBUVB remains the safest bet in children due to its relatively less side-effect profile and non-requirement for post-treatment sun and eye protection. Most of the long-term side-effects of phototherapy are dose related. Therefore, it is proposed that the maximum duration of NBUVB phototherapy in children should be 12 months. If NBUVB is required for a longer period, limited areas bearing active lesions can be exposed. Indiscriminate use of any form of phototherapy without proper and pressing indications is not justified. If long-term use of phototherapy is anticipated for disease control, phototherapy should be preferably substituted by any other available safer alternative.