Fixed drug eruptions (FDE) were reported to be the most common cutaneous adverse drug reaction in an Indian report. [1] Drugs implicated in causing FDE have changed over time and this study aims at understanding these trends.

This retrospective study was conducted in patients who attended our Out-Patient Department (OPD) at a tertiary care center in Southern India over the period of 3 years from January 2009 to December 2011. All relevant information was obtained from patients′ OPD notes. All patients with a history of drug intake followed by classical FDE lesions and those who had a definite or probable adverse drug reaction according to the Naranjo probability score [2] were included in this study.

A detailed history was taken with regards to drug intake, its temporal correlation with FDE, duration of the lesion, extent of involvement, associated mucosal involvement, and improvement of lesions on withdrawal of the drug. If multiple drugs were taken, then the most likely drug to cause such a reaction was stopped and patient was observed for improvement in skin lesions. Oral provocation tests and patch tests were not performed. Complete blood counts and urine microscopy was carried out in all cases. Biochemical analysis, ELISA for antibodies to human immunodeficiency virus and VDRL test was done in selected cases.

A total of 57 patients (42 men and 15 women) presented with FDE during the study period. The mean age of these patients was 36 years (range: 18-78). Most patients were in the third and the fourth decade.

Antibiotics and non-steroidal anti-inflammatory drugs (NSAIDs) were most frequently incriminated and were responsible for three fourths of the cases [Table - 1]. The lips and oral mucosa were the most common sites involved [Figure - 2]. Genital involvement was seen exclusively in males. 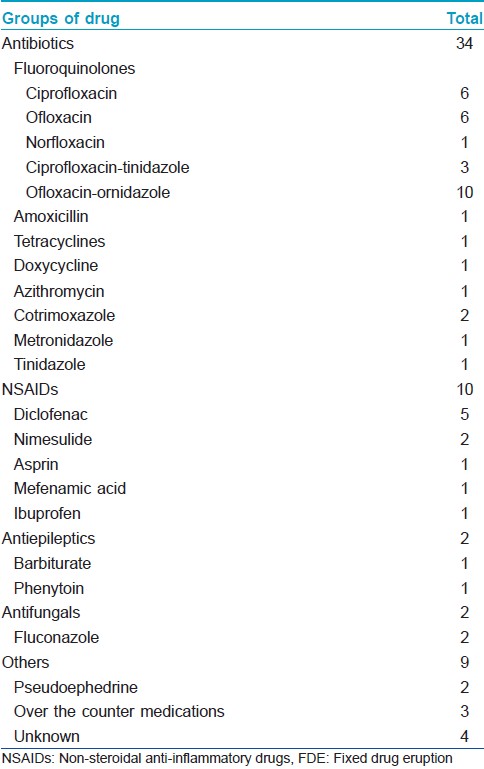 Earlier, tetracyclines were the most frequent cause of FDE, followed by sulphonamides and NSAIDs. [2] With the increasing use of fluoroquinolones, ciprofloxacin has now overtaken other drugs in more recent studies of FDE. [5] In our study, fluoroquinolones, and in particular the ofloxacin-ornidazole fixed dose combination was responsible for the greatest number of cases of FDE. This reflects the widespread use of these drugs for gastrointestinal infections in our part of the country. Our case series also provided some interesting findings such as two cases of recurrent FDE to fluconazole, one of which we have already reported. [2] The high proportion of patients with recurrent episodes (58%) may be attributed to polypharmacy, the low rate of recognition of FDE in general practice or the attitude of patients.