Since time immemorial, medications of various kinds have been used by physicians with the noble intention of curing the sufferer of his ailments. Yet, paradoxically, this well-meaning intention may become the nemesis of many a sufferer and this Hippocratic principle may willy-nilly be defeated. While adverse drug reactions (ADRs) are as old as Medicine itself, cutaneous ADRs may be severe enough to threaten life.

ADRs are reportedly responsible for up to 7% of hospital admissions, and cutaneous ADRs alone contribute to 2-3% of the overall hospital admissions. [1],[2] Up to 30-45% of the ADRs are reportedly cutaneous in nature, 2% of which may be severe and few may even end in fatalities. [3],[4] This adds up to a significant proportion of patients at risk who have to be dealt with effectively.

The most common morphological types of cutaneous ADRs range from maculopapular, urticaria/angioedema to fixed drug eruptions, and the common incriminating drug groups remain antimicrobials, anticonvulsants and non-steroid anti-inflammatory drugs (NSAIDS). [5],[6],[7],[8],[9] In spite of remarkable similarities in the findings, differences could well reflect variations in the prescribing patterns of drugs across these study groups. 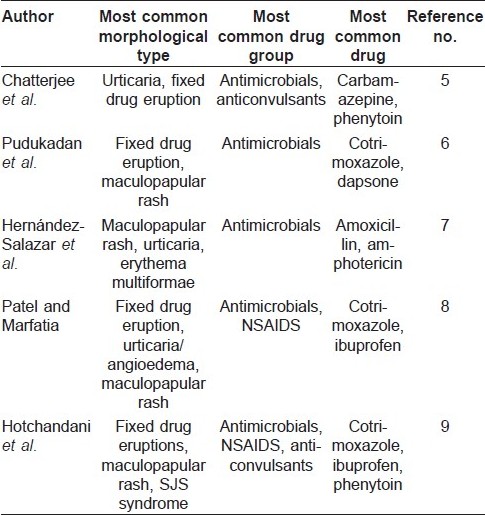 As these ADRs could be seen across a wide spectrum of classes of drugs, clinical diagnosis may be difficult. Diagnosis could be further confounded by history of multiple drug intake, viral fever or cutaneous manifestations of internal diseases. Roujeau′s criteria [10] attempted to simplify defining cutaneous ADRs, viz (a) other causes for the eruption as viral exanthema should be excluded, (b) a temporal relationship between the drug and onset of rash should exist, (c) improvement should be noted following drug cessation, (d) reactivation upon challenge should be noted and (e) cutaneous reaction is known to be associated with the drug. Clinical cases of morbilliform maculopapular ADRs have been pathologically correlated with findings of superficial dermal infiltrates of lymphocytes, eosinophils and neutrophils with or without interface changes. [11]

Certain risk factors for ADRs are (a) patient related, viz age of patients, female sex, viral infection, genetic variations in the metabolism of the drug and human leucocyte antigen (HLA) association and (b) drug related, viz number of drugs taken, route of administration, duration of intake, dose and variation in metabolism. [12],[13]

Cutaneous ADRs in the form of Stevens-Johnson syndrome (SJS), toxic epidermal necrolysis (TEN), drug hypersensitivity reactions (DHR) or drug reaction with eosinophilia and systemic symptoms (DRESS) or drug-induced hypersensitivity syndrome (DIHS) and acute generalized exanthematous pustulosis (AGEP) could be severe and life threatening. The term severe cutaneous adverse reactions (SCAR) was proposed for such conditions, as they were (a) severe, (b) unpredictable and (c) drug induced. [8] Over 200 drugs have been implicated in the literature that can cause SCARs. Causality of the ADR could be measured using the WHO-UMC causality assessment system, which grades the assessment across a spectrum from "certain" to "unlikely" to "unclassified" and "unclassifiable." [14] Clinical criteria for diagnosis and scoring of DRESS, [15] DIHS, [16] AGEP [17] and TEN [18] have been devised and reported in the literature [Table - 1] and [Table - 2]. 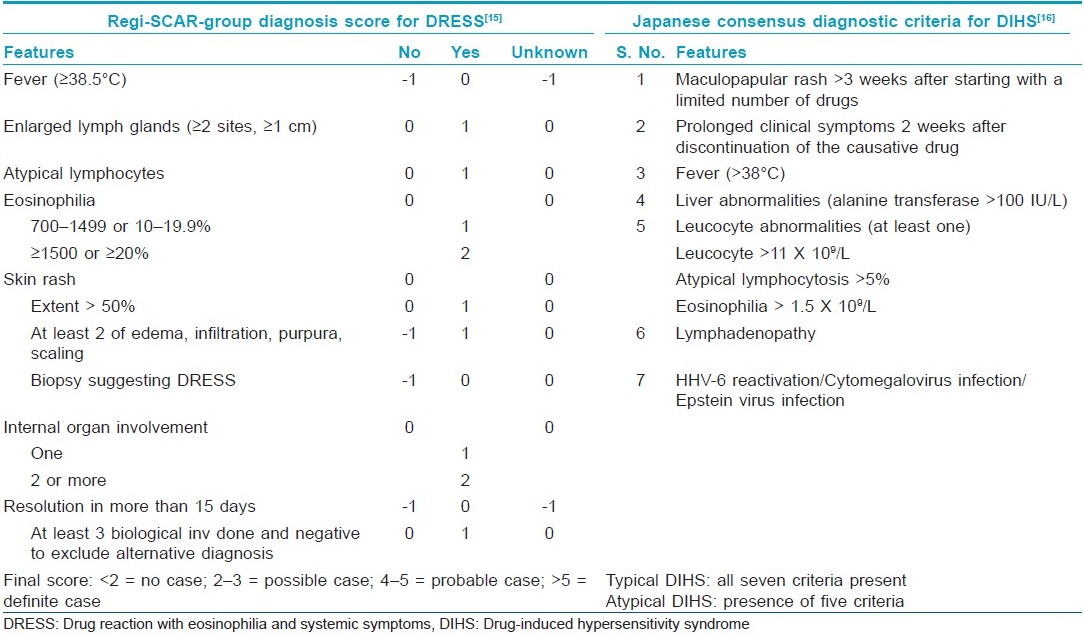 DHRs may comprise up to one third of all ADRs. [19] They are peculiar, in that they (a) cannot be predicted, (b) do not show any relationship to dose, (c) effect a minority of patients and (d) cannot be reproduced in animal models. [20] Despite various nomenclatures, it is established that DHRs start later, last longer, are associated with visceral abnormalities and may require longer therapy as compared with other drug "rashes." Exfoliative dermatitis, due to psoriasis, eczema or lymphoma, angioimmunoblastic lymphadenopathy, viral exanthem and vasculitis count among the differential diagnoses of DHRs. [21] AGEP is characterized by numerous non-follicular pustules on widespread edematous erythema shortly following antibiotic administration and may need to be differentiated from pustular psoriasis. DRESS is a unique drug rash (begins as morbilliform eruption, later become edematous, may evolve into vesicles and tense bullae like TEN, erythroderma or purpuric lesions) as stoppage of the drug, although required, may not lead to subsidence of the rash; rather, the rash progresses further and facial edema is a hallmark feature. It may involve the occurrence of multiorgan involvement, requirement for a long course of steroids as compared with other SCARs and occurrence of relapse if steroids are tapered and stopped fast. As compared with SJS and TEN, lymphocytosis and eosinophilia are the feature of DRESS rather than lymphocytopenia, thrombocytopenia and neutropenia as seen in SJS/TEN.

SJS and TEN are associated with severe morbidity and mortality. While the mortality rate in SJS is 5-10%, that in TEN is reportedly 25-30%. A causal relationship with drugs is found in two-third of all cases. Skin pain, positive Nikolsky′s sign and epidermolysis have been considered to be the most important "danger signs" of an impending SCAR. [22] Dermal cell apoptosis, triggered by Fas and Fas ligand, tumor necrosis factor - a (TNF-a), TNF-a-related apoptosis-inducing ligand and granzyme B, is the predominant factor in the etiology of SJS/TEN. Prompt withdrawal of the incriminating drug, limiting systemic corticosteroids to the first 2 days, commencing cyclosporine or intravenous immunoglobulin (IVIg) within the first 4 days and supportive treatment form the principles of management of these conditions. [23]

Cutting-edge research in delineating the genetic markers for SCAR has revealed strong associations between human leukocyte antigen subtypes and certain SCARs. SCAR due to allopurinol has been linked to HLA-BFNx015801 and that due to carbamazepine has been associated with HLA-BFNx011502. [24] Skin testing (patch test, prick test, intradermal test) with the suspected compound has been reported to be helpful in determining the cause of cutaneous ADRs. Criteria for determining the imputability of drug, [25] guidelines for patch testing [26] and guidelines for intradermal testing for the incriminating drug [27] have already been well described in the literature and serve as valuable tools in establishing the definitive cause of the cutaneous ADR. The success of these skin drug tests depends on the drug tested, its concentration, its volume, the method used, choice of the vehicle and the clinical features of the ADR. Yet, it is important to remember that skin testing is negative in 30-50% of the patients. Conversely, false-positive results may compel the treating physician to think hard about the relevance and specificity of the skin test results. [28] Appropriate negative-control patients are recommended to be used in order to avoid false-positive results. Meanwhile, low sensitivity of the patch tests in SJS/TEN has also been reported. [29] The oral rechallenge test, although a tool to establish the drug-rash relationship, should be avoided in SCARs.

Multiple organ system involvement in SCARs necessitates a multispecialty approach. In the absence of effective evidence-based treatment protocols and with no consensus on treatment of SCARs, especially with the use of systemic steroids, controversies still exist in the management of SCARs. [30] While newer drugs like lamotrigine, nevirapine and imatinib add to the burgeoning list of drugs incriminated in SCAR, newer therapies like infliximab are emerging as effective therapeutic options in its management. [31],[32] The ongoing Regi-SCAR study, building on the lessons learnt from the SCAR and Euro-SCAR studies, will surely help the future generations in surmounting this formidable and challenging task of managing potentially fatal cases. [33]