The role of skin in the transmission of leprosy through direct contact is thought to be rare and it was believed that intact skin is not considered as a major portal of exit of Mycobacterium leprae due to the inability of M. Leprae to pass through it.

We studied the density and distribution of M. leprae in the epidermis and skin appendages of 42 cases of multibacillary leprosy (ML) to assess the possible route of disease transmission through the skin surface or its appendageal secretion.

The study was conducted in Farwaniya hospital, Kuwait, which is not considered as an endemic area of leprosy, but the disease was observed in immigrants, mostly Indians and Egyptians. According to Ridley-Jopling classification, 23 cases were borderline lepromatous leprosy and 19 cases were lepromatous leprosy (LL). All cases showed multiple bilateral reddish infiltrated papulonodular skin lesions distributed on the extremities (11 cases), trunk and extremities (14 cases), and generalized including the face (17 cases).

One biopsy was taken from each patient, and a minimum of six sections were prepared from each block and stained with modified Ziehl-Nielsen (Fite) stain to allow better evaluation and counting of lepra bacilli in the different levels of epidermis and skin appendages. The positive finding and density of M. leprae in the epidermis and skin appendages (hair follicle, sweat glands, and sebaceous glands) were recorded for each case. The density was calculated by visual counting of all bacilli (fragmented or intact) per high-power field (HPF) (x100) in 10 different sections in each slide, and then the mean ± SD was recorded.

M. leprae were observed in 17 cases (40.4%) in the epidermis, 7 cases (16.6%) in the papillary dermis, 29 cases (69%) in hair follicles, 6 cases (14.3%) in sweat glands, and 2 cases (4.7%) in sebaceous glands. The density of M. leprae was greatly varied in these structures; the epidermis showed bacilli ranging from 5 to 28 bacilli/HPF (mean 12 ± 4.7) which were more concentrated in the horny layer, but most of them were fragmented or cracked [Figure - 1]a. In four cases, M. leprae were seen in Langerhans cells (LC) that were identified by their mid-epidermal location and clear cytoplasm [Figure - 1]b. Sebaceous and sweat glands showed less density of bacilli ranging from 1 to 12 bacilli/HPF (mean 4 ± 1.3), and most of them were fragmented and distributed in between glandular epithelium more than in the lumen [Figure - 2]. Hair follicles showed higher concentration of bacilli in the skin with density more than 100 bacilli/HPF (mean 35±12.8). They also showed more intact and viable bacilli that were more concentrated in the hair bulb and external root sheath and forming globi or clumps that were observed in the basal layer of follicular epithelium [Figure - 3]a and b. The clinical and histological findings are summarized in [Table - 1]. 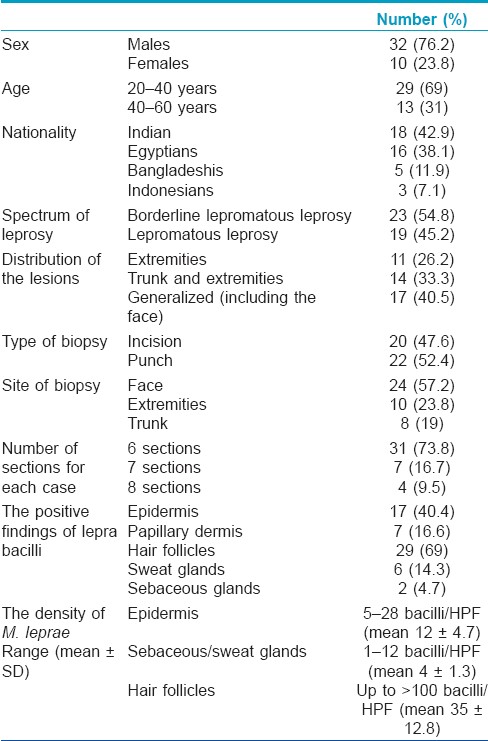 Table 1: The clinical and histological findings of 42 patients with multibacillary leprosy

These results suggested the significant role of follicular epithelium in harboring lepra bacilli and they may play a role in distributing these bacilli onto the surface epidermis. Gummer et al.[1] found M. leprae in the dermal papilla and outer root sheath, while they were rarely found in hair shaft and inner root sheath of both anagen and telogen hair follicles of eyebrows. They suggested that hair follicle is unlikely to have a role in the dissemination of M. leprae, but it may be important in providing a suitable site for the incubation of the bacillus within the dermis.

Our results showed a negligible role of sweat and sebaceous glands in harboring lepra bacilli, but it was confirmed that M. leprae are discharged and disseminated through glandular secretions and it was reported that the intraepidermal eccrine sweat duct (acrosyringium) showed a high density of lepra bacilli. [3]

Although it was suggested that nasal secretions are a major source of infection while intact skin is negligible and insignificant as a source of infection, there are other studies that challenge this concept and suggest that the number of bacilli discharged from the intact skin seems adequate for the transmission of leprosy considering the large surface area of the skin. [4] Moreover, it was found that 80% of untreated ML patients and 17% of contacts had M. leprae in skin washings by using polymerase chain reaction. [5]

LC are phagocytic cells and we observed M. leprae in LC in few cases and this may have contributed to the low density of LC in LL patients caused by the absence of T-helper cells, [6] but the exact relationship between LC and lepra bacilli may need more wide-scale study in an endemic area of leprosy. On the basis of the previous reports in addition to our results, it seems that the role of skin in the transmission of M. leprae should be considered and skin appendages, specially hair follicles, have a major role in the incubation of lepra bacilli in lepromatous leprosy patient .