A 48-year-old man weighing 60 kg was transferred from a local community hospital history of intermittent fever and rash od one month duration. He had a history of ventricular tachycardia and was prescribed mexiletine 2 months ago. Twenty-four days after the initiation of mexiletine, he developed erythematous edematous papules on the forearms and significant erythema and swelling of the face [Figure - 1]. Erythematous edematous papules gradually progressed to involve the chest, back, and proximal extremities. The patient stopped taking mexiletine and was then prescribed prednisolone 100 mg daily for 9 days, which was then tapered to 70 mg daily for 6 days in the community hospital. He rapidly improved, but he weaned himself off prednisolone on his own volition after discharge. He deteriorated within 11 days after the discontinuation of prednisolone and had a widespread exfoliative dermatitis [Figure - 2] and [Figure - 3]. Subsequently, the patient was admitted to our hospital. Clinical examination did not reveal any mucosal involvement. Lymph nodes in the axillary area were palpable. The patient was febrile with a temperature varying between 37.7°C and 39.5°C. Blood pressure was in the normal range (118/72 mmHg), and pulse rate was 104 beats/min. Laboratory examination revealed hypereosinophilia (3.5 × 103/mm 3) and elevated alanine aminotransferase and lactate dehydrogenase levels (alanine aminotransferase, 97 U/L; lactate dehydrogenase, 505 U/L). Renal function test (serum creatinine, 0.82 mg/dL; blood urea nitrogen, 19.31 mg/dL; serum potassium 5.0 mEq/L) was in the normal range [Table - 1]. The patient denied infectious symptoms, history of psoriasis, or use of other medication before the onset of the rash. A skin biopsy specimen from the right abdomen revealed parakeratosis along with spongiotic dermatitis, lymphocytes, and mild eosinophil infiltration in the upper dermis, which was consistent with a drug hypersensitivity reaction [Figure - 4] and [Figure - 5]. Periodic acid-Schiff (PAS) stain was negative for fungi. Based on the clinical findings, the patient was diagnosed as drug-induced hypersensitivity syndrome, which was confirmed using the RegiSCAR criteria for DRESS and drug-induced hypersensitivity syndrome [Table - 2].[2] The diagnosis of drug-induced hypersensitivity syndrome was clear, so HHV-6 serology was not done in our hospital. Using the Naranjo adverse drug reaction probability scale, we determined that the probability of mexiletine causing the drug-induced hypersensitivity syndrome was probable (score of 5).[3]

Table 1: Laboratory data of the patient 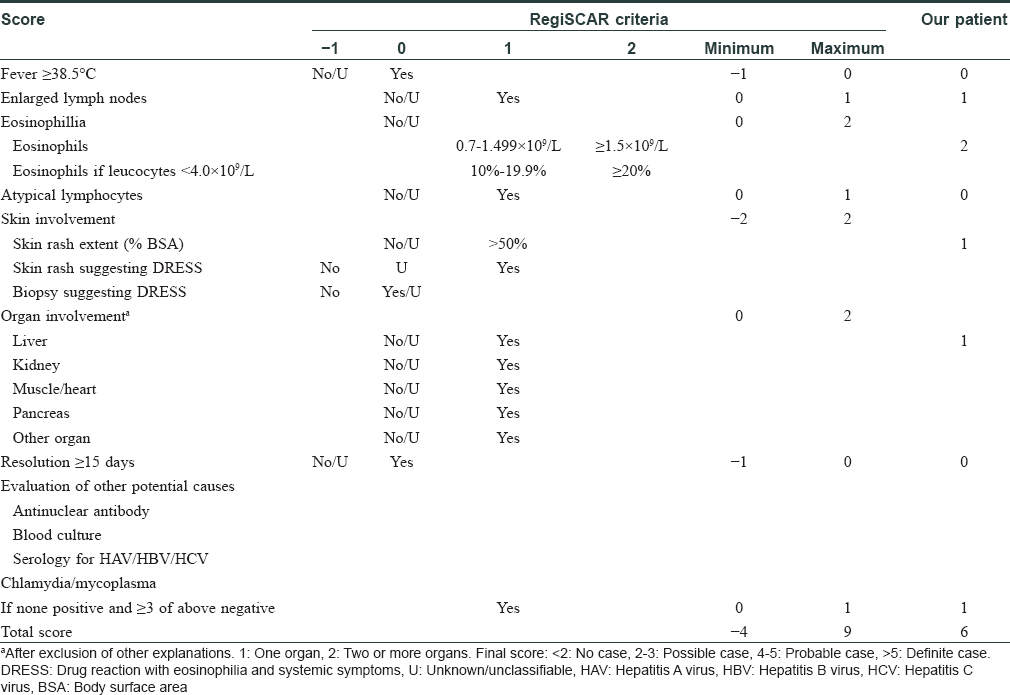 High blood glucose level of 361.8 mg/dL and strong positive acetone in the urine pointed towards diabetic ketoacidosis, when he was admitted in our hospital. He denied prior history of diabetes mellitus, and blood glucose level was in the normal range during hospitalization in the local community hospital. Diabetic ketoacidosis of the patient was successfully treated by continuous venous drop insulin infusion and fluid replacement. We speculated that diabetes mellitus was the adverse event of corticosteroids. Because systemic corticosteroid therapy was contraindicated, we decided not to use corticosteroids. The patient began a 7-day course of oral cyclosporine at a dose of 5 mg/kg per day divided into twice-daily dosing (150 mg twice daily). Three days after starting treatment with cyclosporine, his eruption started to resolve. After the 7-day course of cyclosporine, his eruption had completely resolved [Figure - 6] and [Figure - 7], and hematological investigation revealed normal alanine aminotransferase concentrations and eosinophil counts (alanine aminotransferase, 50 U/L; eosinophil counts, 0.48 × 103/mm 3) [Table - 1] (37 days after the onset of the skin eruption). Then, the cyclosporine dosage was tapered gradually to 100 mg twice daily for 14 days and 150 mg daily for 20 days. The patient weaned himself off cyclosporine on his own volition and his skin remained quiescent. The total duration of cyclosporine treatment was 41 days. The renal function, blood pressure, and serum lipids remained within the normal range during cyclosporine treatment [Table - 1]. He had no further recurrence of symptoms after 6 months' follow-up.

We found only 4 cases of this condition, successfully treated with cyclosporine reported in the English literature.[4],[5],[6] Harman et al. reported a patient who developed a reaction to phenytoin and was initially treated with a long tapering course of prednisone. However, after 9 months, she had a recurrence of symptoms. With the patient developing adverse effects of corticosteroids, 4 mg/kg of cyclosporine daily was commenced as a steroid-sparing agent and her skin lesions resolved finally after treatment for 6 months.[4] T-cell production of interleukin-5, leading to eosinophilia may be an important mechanism in the pathogenesis of drug hypersensitivity syndrome. Both corticosteroids and cyclosporine suppress the production of interleukin-5 by T cells. Hence, cyclosporine provides a possible alternative to corticosteroids in the management of drug hypersensitivity. Zuliani et al. reported a patient with drug hypersensitivity syndrome induced by vancomycin, with acute interstitial nephritis and hepatitis, who was initially treated with corticosteroids for 3 weeks without any improvement. After tapering the steroids, hemodialysis and 5-day course of cyclosporine was followed by quick resolution of the skin rash and recovery of renal function.[5] Kirchhof et al. reported two cases who were treated with 3–7 day course of cyclosporine, resulting in rapid and significant clinical improvement.[6] Lee et al. and Daoulah et al. also reported patients who were initially treated with corticosteroids but whose conditions continued to worsen. Despite subsequent treatment with cyclosporine and other immunosuppressive medications, their clinical conditions did not result in clinical resolution.[7],[8]

The first case of mexiletine-induced hypersensitivity syndrome was reported by Higaet al. in 1997.[9] Although mexiletine is prescribed worldwide, most of the previously reported cases of mexiletine-induced hypersensitivity syndrome have been from Japan, suggesting a genetic predisposition.[10] Despite ethnic differences, the Chinese and Japanese populations share much the same genetic background. The pathogenesis of hypersensitivity is unclear, but probably involves a combination of impaired pharmacokinetics and accumulation of drug metabolites, the sequential reactivation of the herpesvirus family and genetic susceptibility conferred by the association with certain human leukocyte antigen (HLA) class I alleles.[6] The immune system is believed to play a central role in the pathogenesis of drug hypersensitivity syndrome. It is well established that certain human leukocyte antigen haplotypes predispose patients to drug hypersensitivity syndrome. These molecules interact with drug metabolites and are ultimately presented to T cells, resulting in T-cell activation. Recent studies also found a close relationship between human herpes virus 6 (HHV-6) and the development of. drug hypersensitivity syndrome It is hypothesized that T-cell activation may stimulate reactivation and replication of dormant herpesviruses within immune cells. Because cyclosporine targets T cells specifically, by downregulating activation of nuclear factor of activated T cells, it might be an appropriate medication to use in the treatment of this condition.[11]

The authors certify that they have obtained all appropriate patient consent forms. In the form, the patient has given his consent for his images and other clinical information to be reported in the journal. The patient understand that name and initial will not be published and due efforts will be made to conceal identity, but anonymity cannot be guaranteed.