Immune reconstitution inflammatory syndrome (IRIS) is an unusual inflammatory reaction due to infectious and non-infectious causes occurring in human Immunodeficiency virus (HIV)-infected patients. IRIS occurs after the initiation of antiretroviral therapy. There are no reports of type I lepra reaction due to IRIS in published literature from India. We report two cases of HIV-infected males who presented with borderline tuberculoid leprosy in type 1 reaction after the initiation of highly active antiretroviral treatment (HAART). Case 1 presented with multiple, tender, erythematous and hypoesthetic plaques on the trunk and extremities after 3 months of antiretroviral therapy. In case 2, type I lepra reaction was observed 2 months after the initiation of HAART.
Keywords: Borderline tuberculoid leprosy, Highly active antiretroviral treatment, Immune reconstitution inflammatory syndrome, Reversal reaction, Type I lepra reaction 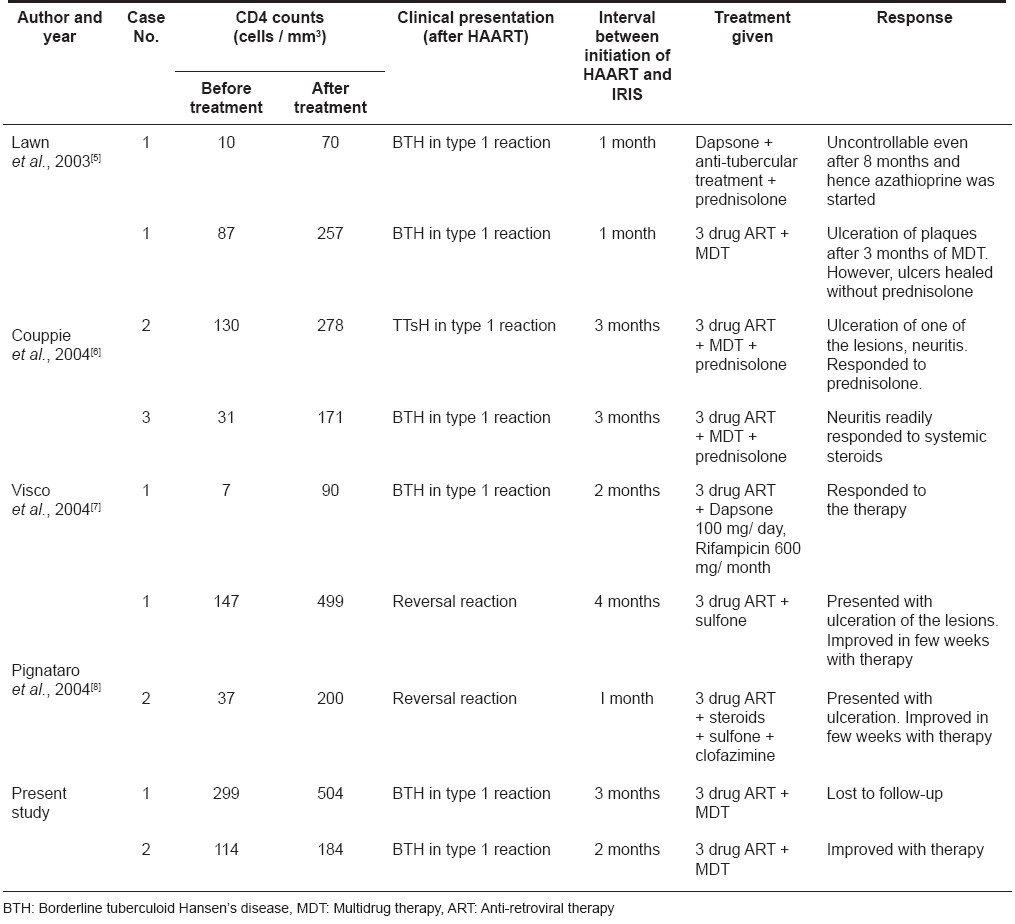 Table 1: Overview of all cases of leprosy presenting as immune reconstitution inflammatory reported hitherto as well as present cases

Table 1: Overview of all cases of leprosy presenting as immune reconstitution inflammatory reported hitherto as well as present cases

Immune reconstitution inflammatory syndrome (IRIS) is a paradoxical deterioration in the clinical status of a human immunodeficiency virus (HIV)-infected patient on highly active antiretroviral treatment (HAART) and is attributed to the treatment-induced recovery of immune system. This immune response can be either against an infectious agent or a non-infectious condition; the former being more common than the latter. [1] Though IRIS obviates the need for secondary prophylaxis in HIV-infected patients, the associated severe inflammation can be responsible for the deterioration in the clinical status of a patient and hence is a double-edged sword. Therefore, it is crucial to recognize this syndrome as successful treatment relies on alleviation of a patient′s symptoms without compromising HAART or antimicrobial therapy. With increasing afforbability of HAART, clinicians will put more and more HIV patients on HAART. Hence, an increase in the incidence of IRIS can be expected. We hereby report two cases of leprosy presenting as IRIS in patients receiving HAART.

A 35-year-old HIV-infected male patient on HAART (stavudine, lamivudine and nevirapine) since July 2004, presented to us with the complaints of multiple red raised lesions on the trunk and lower extremities of six months duration (3 months after the initiation of HAART). He gave a history of loss of sensations over the lesions and had no history of paraesthesia or motor weakness in his extremities.

Examination revealed multiple, well-defined, erythematous, tender plaques on the chest, lower abdomen, buttock and right calf and a few of these showed satellite lesions [Figure - 1]. The plaque over the buttock showed a superimposed healing ulcer. There was asymmetrical thickening of the right infra-orbital, ulnar, bilateral common peroneal nerves. Sensations over the plaques were decreased. Motor system examination revealed no abnormality.

At the start of therapy, his CD4 counts were 299 cells/mm 3 and 3 months later, they had increased to 504 cells/mm 3 . Viral load was not measured. Biopsy from an erythematous infiltrated plaque showed multiple, elongated tuberculoid granulomas made up of epithelioid cells and lymphocytes. Some of the granulomas showed a caseating center [Figure - 2]. Based on the patient′s clinical features and investigations, a diagnosis of borderline tuberculoid leprosy in type 1 upgrading reaction as an IRIS was made. The patient was started on multi-drug therapy for multibacillary leprosy (MDT-MB) with continuation of HAART. However, he did not return for a follow-up visit and could not be traced at his address.

A 42-year-old HIV-infected male patient on HAART (stavudine, lamivudine and nevirapine) since February 2006, presented to us with multiple red raised lesions affecting the trunk and lower limbs since six months (two months after the initiation of HAART). There was a gradual increase in the number of the lesions. He experienced pain and tingling over the plaque on the foot.

Examination revealed multiple erythematous plaques with xerotic surface over the right shoulder, right lumbar region, bilateral calves, right thigh and dorsa of the right foot involving middle three toes [Figure - 3]. Touch and pin prick sensations were decreased on the plaques. There was pain on tapping the plaques over the abdomen and foot. There was asymmetrical thickening of right ulnar and radial cutaneous and bilateral common peroneal nerves. Motor examination revealed no abnormality.

Before initiation of HAART, CD4 counts were 114 cells/mm 3 and six months later they had increased slightly to 184 cells/mm 3 . Biopsy from an erythematous infiltrated plaque revealed multiple tuberculoid granulomas mainly in the upper and mid dermis with a few granulomas extending up to the epidermis. Based on these clinical and histopathological findings, a diagnosis of borderline tuberculoid leprosy in type 1 reaction was made. The patient was asked to continue his HAART and was additionally started on MDT-MB. The patient has completed six months of his anti-leprosy medications with improvement in the skin lesions.

IRIS is an undesirable inflammatory reaction to a pathogen culminating in the paradoxical deterioration in clinical status due to the recuperating immune system. Initially reported cases of IRIS included reactions to Mycobacterium avium complex infection. [2] Other infections associated with IRIS include viruses (human herpes viruses, hepatitis virus, human papilloma virus ), fungi ( Cryptococcosis neoformans , Histoplasmosis capsulatum ) and protozoa ( Toxoplasma gondii , Pneumocystis jiroveci , Leishmania donovani ). [1] Most of these agents are organisms causing opportunistic infections in HIV patients though non-opportunistic organisms can also elicit such a reaction. However, this paradoxical deterioration is not only seen with infectious conditions but also with sarcoidosis, various autoimmune and neoplastic disorders. [1] The sudden clinical deterioration associated with IRIS can be at times fatal and needs prompt intervention.

Though IRIS is a widely recognized entity now, there is still a lack of universally acceptable diagnostic criteria and consensus of treatment for IRIS. According to Shelburne et al. , a diagnosis of IRIS is warranted in any HIV patient who is on HAART and develops an inflammatory reaction along with a fall in viral load and rise in CD4 cell counts. In addition, the clinical course of this reaction should not be consistent with the usual course of a previously or newly detected opportunistic infection or adverse drug reaction. IRIS most commonly occurs in patients with low CD4 counts (< 200 cells/mm 3 ). Even a minimal decrease in viral load in the absence of a significant rise in CD4 cell count can precipitate IRIS. [3] Treatment of IRIS includes the use of anti-inflammatory drugs, steroids, and specific antimicrobial agents with the continuation of HAART. [1]

IRIS is not a condition specific to HIV-positive patients but can also occur in HIV-negative individuals. In fact, it has been observed for many years notably after the recovery of neutrophil counts from chemotherapy, engraftment after bone marrow transplantation and interruption of long-term immunosuppressive therapy.

Till date, there are only four reports of leprosy presenting as IRIS [Table - 1]. [4],[5],[6],[7] The first case of leprosy diagnosed after the initiation of HAART was reported in 2003 by Lawn et al. [5] In all of them including our two cases, the disease has occurred within 3 months of initiation of HAART. In 2004, the first of the two cases reported by Pignataro et al. [8] was diagnosed after 4 months of starting HAART. However, the clinical history and details provided by the authors suggests that the patient had developed the leprosy lesion as early as 2 months of starting HAART but the diagnosis was not proved. [8] The mean CD4 cell counts before and after starting HAART were 95 cells/mm 3 (range, 72-99 cells/mm 3 ) and 250.3 cells/mm 3 (range, 70-504 cells/mm 3 ) respectively. The baseline CD4 counts were highest in our series of patients which suggests that, IRIS can also occur at higher basal CD4 cell counts. As in our cases, viral load has not been consistently measured by other authors and hence it is difficult to correlate the phenomenon of leprosy manifested as IRIS with viral load and its changing trends.

All of the reported cases including ours (except 2 cases reported by Pignataro et al. , [8] ) belong to the tuberculoid spectrum of leprosy implying that there is a good host immune response. The co-existing type I lepra reaction in all these cases further supports the fact that there is recovery of the immunological system which is the cause for this paradoxical response.

In IRIS, the primary event is restoration of immunity by HAART which then recognizes and mounts an immune response against the bacilli. In contrast, in leprosy presenting as type I reaction, initially, there is lysis of bacilli by multi-drug therapy which then restores the immune system and this reconstituted immune response leads to type I reaction.

There is no consensus regarding management of IRIS and hence, leprosy presenting as IRIS has to be managed tactfully with the guidance of some proposed recommendations. [1],[3]

In any HIV-infected patient on HAART who develops tender erythematous plaques or sudden paralysis, leprosy should be ruled out on priority basis especially in endemic areas. It is to be remembered that such reactions are more common in patients with low CD4 counts and during the initial 3 months of initiation of HAART, although variations in the latter are possible.