Palmoplantar keratodermas are heterogeneous group of disorders characterized by abnormal keratinization of palmar and plantar skin. [1] Among which punctate palmoplantar keratoderma (PPPK) is much rarer with an estimated prevalence rate of 1.17/100,000. It is usually manifested bilaterally as asymptomatic, tiny, hyperkeratotic punctate papules/plaque on the palmoplantar surface. [2] The exact etiology of this disorder is not known, but a dual influence of genetic and environmental factors may trigger the disease. [2] Here, we report a case of unilateral linear PPPK for the first time.

A 12-year-old male presented with asymptomatic linear thickening and yellowish discoloration of left sole and left palm since 7 years and 5 years, respectively. Lesions first appeared on the left heel as punctate small plaques that gradually extend in linear fashion up to the third and fourth toe over a period of 7 years. Two years later, similar kind of lesions appeared on the left hypo-thenar eminence which slowly progressed and extend to the base of left little finger. There were no similar lesions on any other part of the body, and the lesions were asymptomatic throughout the course of the disease.

Clinical examination revealed a yellow-colored thick linear punctate plaque on the left sole extending from the central part of the heel up to the third and fourth toe with variable width ranging from 1 to 5 cm. The surface of the plaque had multiple punctums; on palpation lesion was firm, rough, and non-tender [Figure - 1]. Thickening and yellowish discoloration was more over pressure areas. Similar type of plaques with punctums ranging from 2 × 3 cm to 1 × 2 cm were present on the left palm extending from hypothenar eminence to the base of little finger [Figure - 1]. Right palm and right sole were normal.

Apart from these cutaneous clinical findings, rest of dermatological and systemic examinations were normal.

With these clinical findings, we had made the probable diagnosis of linear PPPK.

A 4-mm punch biopsy specimen from the left heel was sent to the department of pathology Maulana Azad Medical College, New Delhi, for histopathological examination, which revealed hyperkeratotic epidermis without any columns of parakeratosis or cornoid lamella [Figure - 2]. With these clinical findings and histopathological features, the final diagnosis was made linear PPPK.

Palmoplantar keratodermas are heterogeneous group of disorders characterized by abnormal keratinization of palmar and plantar skin. [1] The palmoplantar keratodermas (PPKs) can initially be divided based on whether they are inherited or acquired. The inherited PPKs are further classified into three distinct types based on clinical pattern of epidermal involvement. The first is diffuse PPK, the second is focal PPK, and the third is punctate keratoderma. [3]

Incidence of various etiological factors causing hyperkeratosis of palms and soles in Indian patients is not known. Palmoplantar keratoderma is found to be more common in males (64.63%), with highest incidence in the age group of 11-20 years (32.92%). Occupation-wise manual workers such as laborers, farmers, and mechanical workers contributed to 48.16%, students 33.15%, and housewives 18.69%. [4]

The exact etiology of this disorder is not known, but a dual influence of genetic and environmental factors may trigger the disease. [2] It has been described in few large autosomal dominant pedigrees. A genomewide scan was performed on an extended autosomal dominant pedigree, and linkage to chromosome 15q22-q24 was identified. [5] Martinez et al. [5] reported two new families with the same phenotype, which confirmed the mapping of the locus for punctate PPK to a 9.98-cm interval, flanked by markers D15S534 and D15S818.

Clinically, PPPK present as an asymptomatic, tiny, hyperkeratotic punctate papules on the palmoplantar surface. In PPPK, involvement is usually bilateral with no case unilateral linear PPPK reported in the literature. [2] Nail abnormalities in the form of longitudinal ridging, onychorrhexis, onychoschizia, trachyonychia, and notching can be seen. [6] Individual with PPPK lack associated systemic features; however, spastic paralysis, ankylosing spondylitis, facial sebaceous hyperplasia, and atopy have been reported. [2] An association with gastrointestinal and pulmonary malignancy is possible. [2],[7],[8] Because the affected individuals appear to be at increased risk of developing malignant conditions, a regular follow-up with thorough history taking and clinical examination is mandatory in cases of hereditary punctate PPK. [8]

Histopathological features of PPPK are hyperkeratotic epidermis without any columns of parakeratosis or elastorrhexis. Electron microscopy shows enlarged nucleoli with abundant tonofilaments in the basal cells and keratohyalin-like granules confined to the upper part of the stratum spinosum. [2]

In this case, we also find the similar histological findings. Due to non-availability, we cannot perform the electron microscopic examination of this case.

Our patient is also presented with an asymptomatic, tiny, hyperkeratotic punctate papules on the palmoplantar surface with unilateral left sole and left palm involvement without any associated diseases and we had made the differential diagnosis of linear PPPK, [1,2] linear punctate porokeratosis, [9] porokeratotic eccrine ostial and dermal duct naevus (PEODDN), [10],[11] arsenical keratosis, [12] striate PPK, [13],[14] Naegeli-Franceschetti-Jadassohn syndrome, [15] and punctate accentuated keratosis. [16] 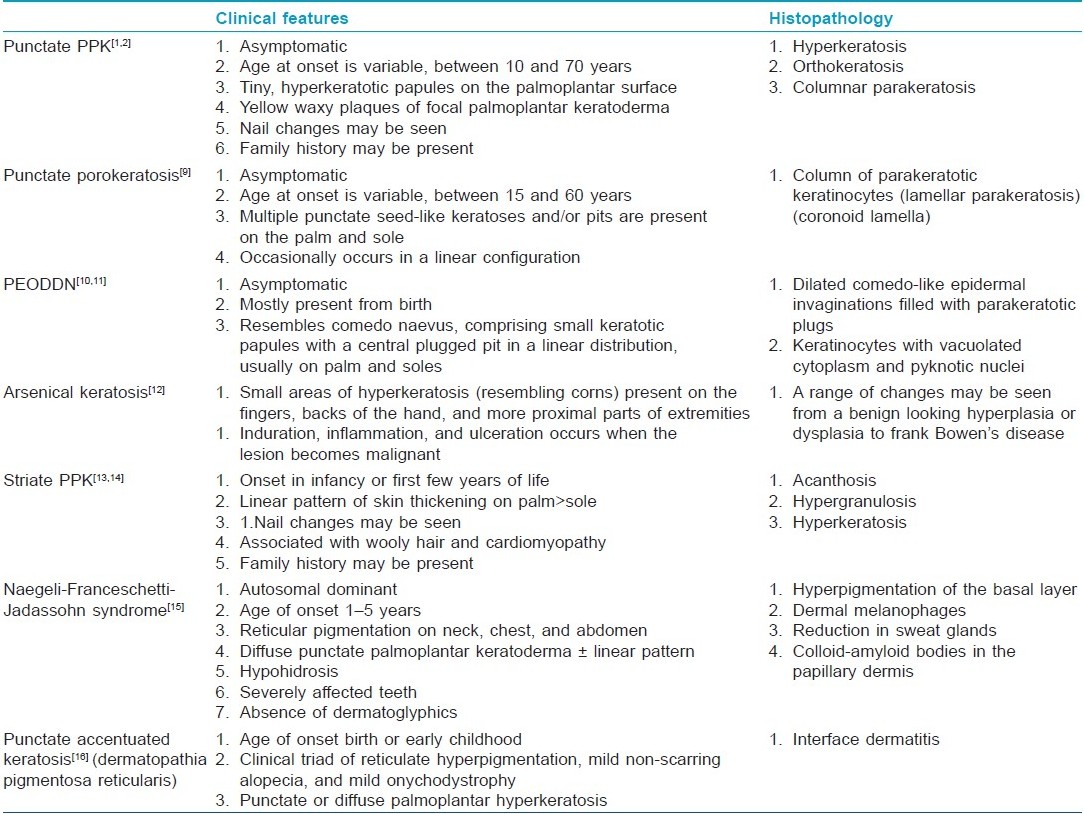 Treatment of keratodermas is generally symptomatic like saltwater soaks, paring, topical keratolytics to specific therapies such as systemic retinoids, psoralens and ultraviolet A (PUVA), and re-PUVA. [2],[8] When specific therapy does not works, then patient can be considered for reconstructive surgery with total excision of the hyperkeratotic skin followed by grafting. [2]