Validation of the diagnostic criteria for segmental vitiligo

This was a cross-sectional analytical and diagnostic validation study conducted in the Department of Dermatology and Venereology of the All India Institute of Medical Sciences, New Delhi, India over a period of 4 years (2011–2015). Approval from the institute ethics committee was obtained and all patients provided informed consent. Patients with vitiligo having unilateral localized lesions or those with noncontiguous lesions with less than/equal to three body sites (either side of head/neck, trunk, upper limb and lower limb was considered as one site) were included in the study. Vitiligo patients with extensive bilateral vitiligo, those with involvement of more than three body sites and those with mixed vitiligo or pure mucosal vitiligo were excluded. A detailed history was elicited and clinical evaluation done for all the patients. Patients were classified as segmental or nonsegmental vitiligo using the proposed criteria [Table - 1]. Standard clinical photographs were taken of all the patients and sent for evaluation to three experts (VR, JS and AM), who were not a part of the previous descriptive study.[3] Opinion was sought from each expert independently, while they were blinded to the opinion of the other two experts. The opinion on the diagnosis as given by at least two out of three experts was considered the final diagnosis, and in the absence of any other specific parameters, this was regarded as the “gold standard.” In case of doubt, they classified cases as “not sure, maybe segmental vitiligo,” “not sure, maybe nonsegmental vitiligo” and “completely unsure, cannot say.” 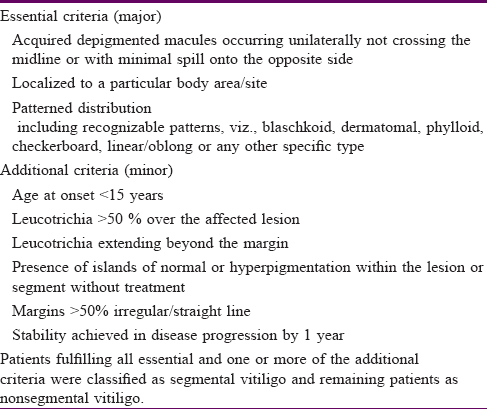 Table 1: The proposed clinical criteria for the diagnosis of segmental vitiligo

A sample size of minimum 120 vitiligo patients was calculated to achieve 80% sensitivity and 80% specificity with 95% confidence interval (CI) and 10% absolute error margin. The sensitivity, specificity, positive predictive value and the negative predictive value of the proposed clinical criteria for segmental vitiligo were calculated using the experts' opinions as the reference. The agreement in the classifications between the experts' and clinical criteria was assessed using the kappa coefficient of agreement (k). A P < 0.05 was considered significant for all statistical analyses. The analysis was implemented on Stata version 12.1.

Two hundred patients with vitiligo were included in the study. The age at onset varied from 6 months to 60 years with a median age at onset of 13 years. The mean disease duration was 53.09 ± 66.3 months (range: 1–480 months). Only a single site was involved in 178 patients, two sites in 19 patients and three sites in three patients. Therefore, 225 vitiliginous areas were further evaluated and each vitiliginous area was treated as an individual unit for quantitative evaluation. The clinical criteria were applied to all these 225 units and each vitiliginous area was classified as either segmental or nonsegmental vitiligo.

A patterned arrangement of vitiligo macules could be ascertained in 135 (60%) lesions: the definite patterns included blaschkoid (n = 65), dermatomal (n = 11) and phylloid (n = 2). Patterns in other cases were doubtful, such as oblong, linear and checkerboard. We also analyzed the 36 cases with patterned vitiligo lesions on the face, out of which 23 (63.89%) cases could be categorized according to Hann classification.[4] Type III (16.66%) was the most common pattern, followed by type Ia and type V (11.1% each).

Vitiligo classification: as per the clinical criteria and experts' opinions

Performance of the clinical criteria against experts' opinions

Table 2: Comparison of the clinical criteria for segmental vitiligo with experts' opinions for “Sure” cases

The demographic and clinical features of vitiligo lesions categorized as either segmental or nonsegmental vitiligo according to the proposed criteria are summarized in [Table - 3].

Table 3: The demographic and clinical profile of cases categorized as segmental or nonsegmental vitiligo as per the proposed clinical criteria

In the absence of an established “gold standard” for the diagnosis of segmental vitiligo, we compared the performance of the diagnostic criteria with expert dermatologists' opinion.

The proposed criteria have good sensitivity, specificity and predictive values for the diagnosis of segmental vitiligo. These can aid the clinician in correctly diagnosing segmental vitiligo, and can be used in clinical as well as research settings.

The authors certify that they have obtained all appropriate patient consent forms. In the form, the patients have given their consent for their images and other clinical information to be reported in the journal. The patient understands that name and initials will not be published and due efforts will be made to conceal the identity, but anonymity cannot be guaranteed.