Distal onycholysis with salmon patch is seen suggesting a diagnosis of nail psoriasis.

What is the significance of nail psoriasis?

Nail psoriasis when associated with distal interphalangeal involvement is indicative of more severe arthritis. The close anatomical link between nail unit and distal interphalangeal joint is possibly responsible. Inflammation of the extensor tendon entheses, which are the attachment points of ligaments and tendon joint capsules to bone, can extend to the nail unit and can result in psoriatic nail changes.

There is a positive association between nail involvement and duration of skin lesions and its severity and the severity of skin and joint involvement. However, nail psoriasis occurs in 40% of people with mild psoriasis as well.

Nail involvement can severely affect the quality of life of a patient.

What is the percentage of patients of psoriasis and psoriatic arthritis who show nail involvement?

What are the clinical manifestations of nail psoriasis? 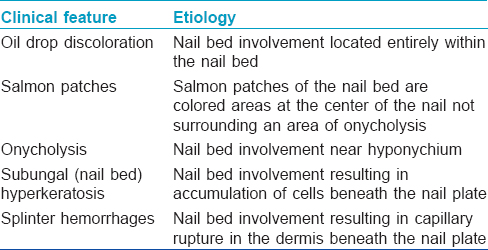 What is the most common sign of nail psoriasis?

Pitting is the most common manifestation of nail psoriasis. The pitting in psoriasis is irregular indepth and distribution on the nail plate versus the regular shallow pits seen in alopecia areata which can give a Scotch plaid appearance.

What is the clinical characteristic of onycholysis in psoriasis?

Onycholysis in psoriatic nails occurs with a characteristic erythematous border or a yellow-pink band at the proximal margin which indicates psoriatic involvement of the nail bed and can be seen clinically and better appreciated through a dermatoscope.

What are the treatment modalities for nail psoriasis?

When nail psoriasis is limited to one or two nails and is not associated with significant symptoms or functional impairment.

When there is marked nail dystrophy involving >2 nails or nail psoriasis is associated with significant symptoms or functional impairment.

When should one suspect pure neuritic Hansen?

In endemic countries such as India, the presence of “mononeuritis” or “mononeuritis multiplex” along with tender enlarged nerves should always raise a suspicion of the diagnosis.

What are the patterns of nerve involvement and clinical features of pure neuritic leprosy?

Mononeuritis is the most common presentation. Involvement of multiple unrelated and distal nerve trunks can also occur as mononeuritis multiplex.

The clinical presentation can be as follows:

What are the histopathological changes in cases of pure neuritic leprosy occurring in the nerve and skin?

What are the complications of pure neuritic leprosy?

The complications of pure neuritic leprosy are as follows:

What are the investigations that can be done in pure neuritic leprosy?

The nerve biopsy is further subjected to hematoxylin and eosin and Fite-Faraco staining.

Silent neuropathy needs to be treated with tapering doses of corticosteroids over months. In cases of overt neuritis, principles of treatment and corticosteroid dosage should be similar to those recommended for management of neuritis of type 1 lepra reaction.

Neuropathic pain in pure neuritic leprosy should be managed with tricyclic antidepressants and anticonvulsants.

What is the prognosis of pure neuritic leprosy?

Pure neuritic leprosy can lead to residual sensory, motor or autonomic nerve impairment. There can be development of skin lesions and progression of disease most commonly to borderline tuberculoid leprosy. Nerve thickening tends to persist for years.

What are the causes of acquired palmoplantar keratoderma?

When should one suspect underlying malignancy in palmoplantar keratoderma?

When there is a sudden onset of palmoplantar keratoderma in the absence of other findings, one should raise the suspicion of an underlying malignancy.

Bazex syndrome, also called acrokeratosis paraneoplastica, is an acquired palmoplantar keratoderma occurring in men more than 40 years of age, associated with neoplasia of the upper aerodigestive tract. There are three stages of this disorder. The eruption starts as erythema with psoriasiform scaling on the fingers and toes which spreads to the ear helices and nasal bridge leading to violaceous erythema and pityriasiform scaling. Next, the eruption spreads to palms and soles producing keratoderma with a violaceous color and giving the skin an edematous appearance with a honeycomb pattern. Finally, if the neoplasm has not been treated, the rash extends to the legs, knees, thighs, arms and scalp.

What are tripe palms?

It is a distinctive form of palmar keratoderma with a thickened moss-like or velvety structure characterized by exaggerated dermatoglyphics of the palmar surface of hands and fingers. These findings are thought to resemble the lining of cow stomach called “tripe.” Tripe palms can be noted with or without acanthosis nigricans. Lung and stomach malignancies are most commonly associated.

This is a hereditary diffuse hyperkeratosis of palms and soles, described by Howel–Evans et al. as “tylosis” and is associated with esophageal carcinoma.

Phacomatosis pigmentovascularis is a rare group of syndromes characterized by the coexistence of a vascular nevus and a pigmentary nevus with or without extracutaneous systemic involvement.

Hasegawa and Yasuhara in 1985 classified phacomatosis pigmentovascularis into four types based on the pigmentary nevus component. A fifth type was added to this traditional classification later. Phacomatosis pigmentovascularis has two subtypes (a) and (b): (a) having only cutaneous signs (b) with extracutaneous manifestations (systemic/syndromic form).

The classification systems and salient clinical findings in various types of phacomatosis pigmentovascularis are described in [Table - 3]. 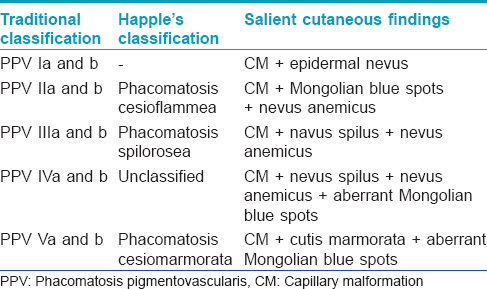 What are the therapeutic and prognostic implications in phacomatosis pigmentovascularis?

Treatment and prognosis of phacomatosis pigmentovascularis depend on the organ systems affected. For cutaneous lesions, a combined laser including Q-switched alexandrite laser for pigmented lesions and pulsed-dye laser for vascular lesions seems to be appropriate. Since most cases arise sporadically without any risk in subsequent pregnancies, prenatal screening is not necessary and this helps in reassuring the patients/parents during genetic counseling.

What is the biological relevance of glutathione redox cycle?

What are the various mechanisms for the skin-lightening effect of glutathione?

The skin-lightening effects are due to the following mechanisms:

What are the various pharmaceutical formulations of glutathione?

Glutathione is primarily available as oral formulations (pills, solutions, sublingual tablets, syrups and sprays) and parenteral formulations (intravenous and intramuscular). It has been administered by intranasal and intrabronchial routes as well.

The three major routes of administration used for skin lightening are topical, oral and intravenous injections.

Topical: Therapy with creams, face washes, peels and mesotherapy have been used as monotherapy or as combination therapy.

Oral: Formulations include capsules and sublingual/buccal tablets. The recommended oral dose is 20–40 mg/kg body weight/day (1–2 g glutathione/day) divided into two doses. The duration of the visible skin-lightening effect may vary from 1 month to 2 years and a maintenance dose of 500 mg/day for an indefinite duration may be needed.

Intravenous: Manufacturers of intravenous glutathione injections recommend a dose of 600–1200 mg to be injected once to twice weekly. The duration for which they should be continued is not specified. Side effects of intravenous glutathione include adverse cutaneous eruptions ranging from skin rashes to serious and potentially fatal Stevens–Johnson Syndrome and toxic epidermal necrolysis, thyroid dysfunction, renal dysfunction, severe abdominal pain and reactions due to faulty technique or inappropriate formulation.

There are no published data for intravenous glutathione and only three randomized controlled trials with short-term follow-up have so far provided evidence in favor of the skin-lightening effects of topical and oral glutathione with no significant adverse effect. The role of glutathione in specific disorders of hyperpigmentation also needs to be elucidated.

Which are the biological agents used for treatment of psoriasis?

The various biological agents and their mechanism of action are as follows:

How does ustekinumab reactivate hepatitis B virus infection?

Ustekinumab is a human monoclonal antibody against interleukin 12/23. Several mechanisms have been proposed for reactivation of hepatitis B virus in patients treated with ustekinumab.

Interleukin-12 inhibition prevents the differentiation of T helper cells, the activation of CD8 cytotoxic T cells and the production of interferon resulting in intracellular replication of the residual hepatitis B virus. Interleukin-23 inhibition suppresses the differentiation of Th17 cells affecting the ability of B cells to proliferate and produce anti-hepatitis B surface antibodies. Further, interleukin-12 inhibition also leads to an increase in the levels of regulatory T cells which may adversely affect the production of antibodies. Antigen-presenting cells, nitric oxide and transforming growth factor are also involved in the onset of hepatitis B infection.

Becker's nevus is characterized by a well-defined hyperpigmented patch with irregular margins and associated hypertrichosis usually on the upper half of trunk and upper extremities and is commonly seen in adolescent males. The most common sites are the shoulder, anterior chest or scapular region but lesions on the face, neck and distal limbs have been reported. Atypical presentation of Becker's nevus can be related to onset (congenital or late), family history, rare sites of distribution such as legs, presence of multiple lesions, bilateral distribution or a dermatomal or blaschkoid pattern of involvement.

What is the pathogenesis of Becker's nevus?

The exact pathogenesis of Becker's nevus is unknown. Various postulated mechanisms include

What is the histopathological feature of Becker's nevus?

What is Becker's nevus syndrome?

What are the treatment options for Becker's nevus?

What are the various immunotherapeutic approaches in treatment of warts?

What is the mechanism of action of immunotherapeutic agents in warts?

What is drug reaction with eosinophilia and systemic symptoms (DRESS) syndrome and its synonyms?

Which are the commonly implicated drugs in DRESS?

Describe the clinical manifestations and treatment of DRESS

The clinical characteristics include fever, facial edema with infiltrated papules and generalized morbilliform or papulo-pustular rash or exfoliative dermatitis. Lymphadenopathy and hematological abnormalities such as hypereosinophilia or atypical lymphocytes may be seen. Organ involvement includes hepatitis, nephritis, pneumonitis, myocarditis, encephalitis and hypothyroidism. Systemic corticosteroids tapered gradually are the mainstay of treatment.