What are the differences between a keloid and hypertrophic scar?

The differences between keloid and hypertrophic scar have been outlined in [Table - 1]. 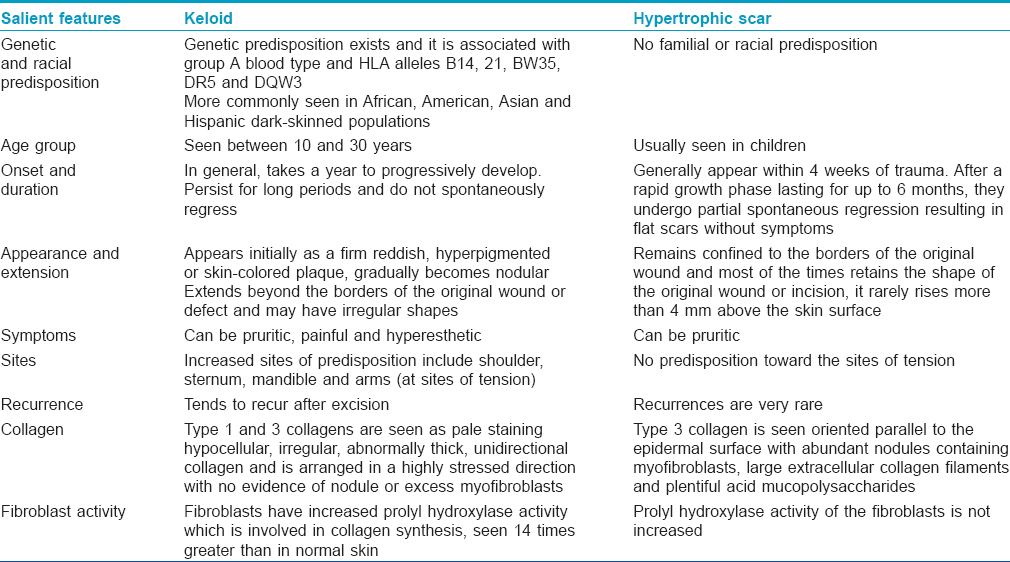 What are the syndromes associated with the tendency to develop keloids?

What are the risk factors for keloid formation?

The risk factors for keloid formation include the following:

What are the preventive measures that can be taken in cases with a keloidal tendency?

The preventive measures which can be undertaken in persons who are prone to develop keloids include the following:

What are the treatment modalities for keloids?

The treatment modalities for keloids have been outlined in [Table - 2]. 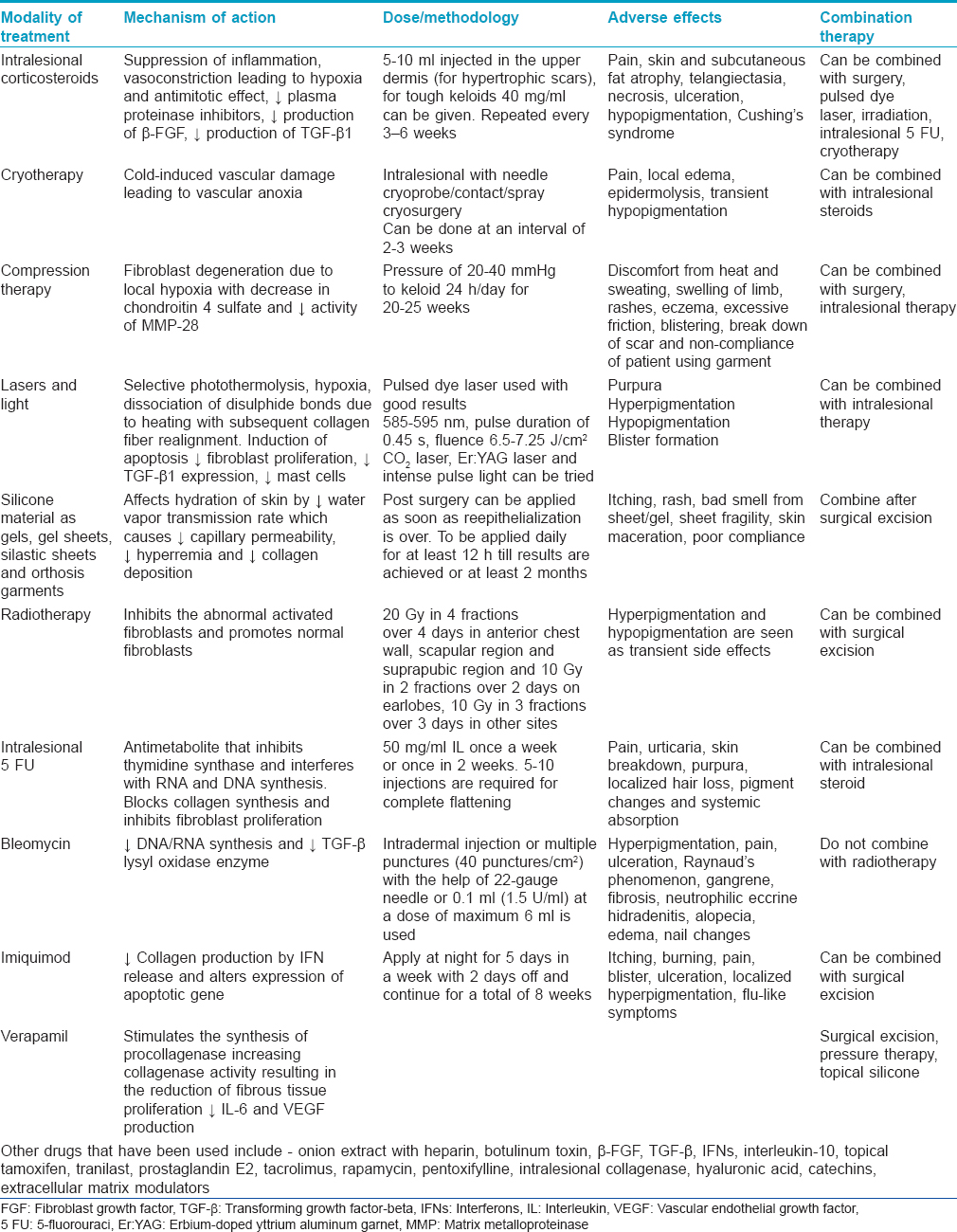 What is dermal melanocytosis?

Enumerate the salient aspects which help to differentiate the various dermal melanocytosis?

The differentiating features of dermal melanocytosis have been outlined in [Table - 3]. 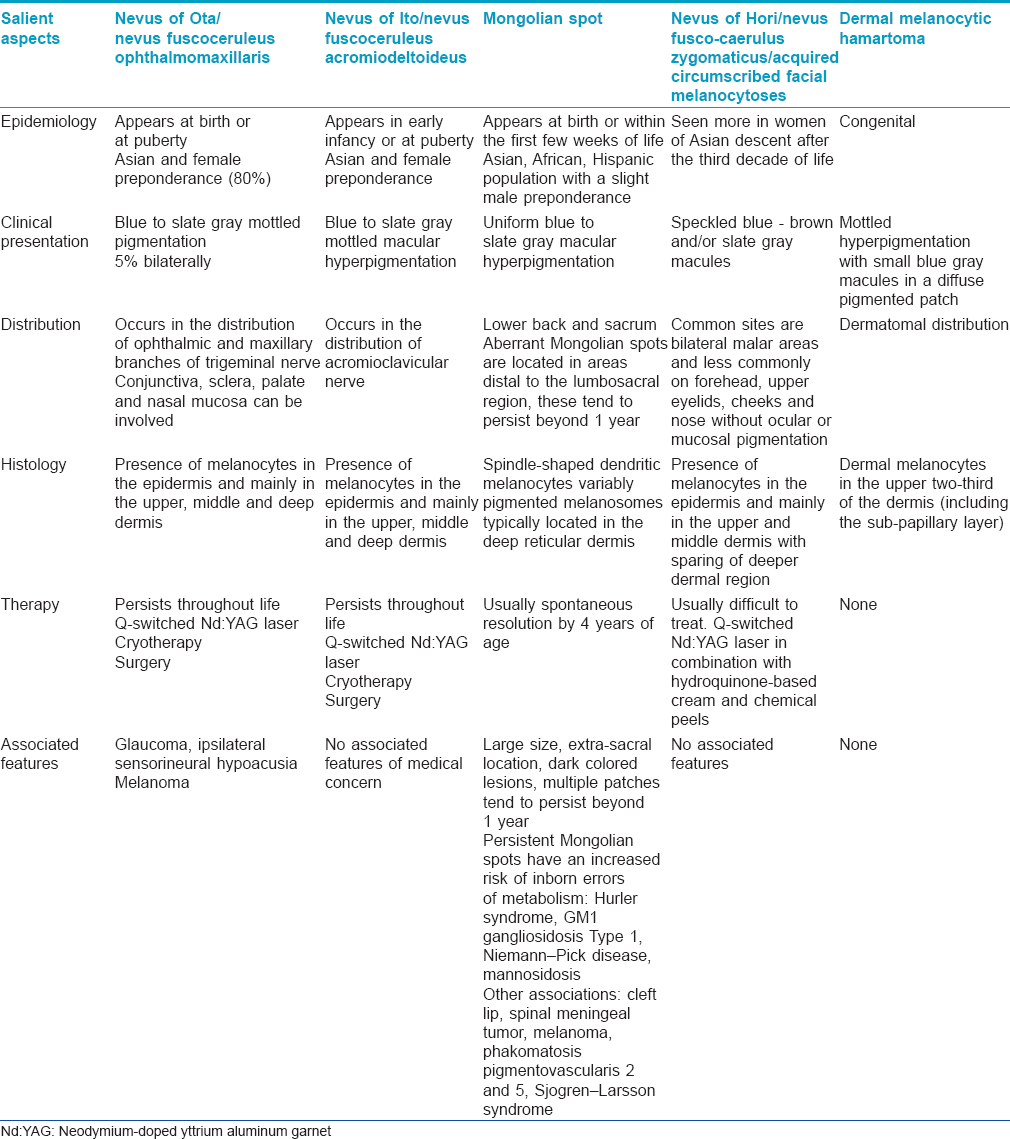 Nevoid Hyperkeratosis of Nipple and Areola

What is nevoid hyperkeratosis of the nipple and areola?

How is nevoid hyperkeratosis of the nipple and areola classified?

Nevoid hyperkeratosis of the nipple and areola has been classified as follows:

What is the management of a case of nevoid hyperkeratosis?

Unilateral primary hyperkeratosis of the nipple and/or areola must be distinguished from an underlying breast carcinoma. Pain, bleeding, ulceration, nipple discharge or loss of normal anatomy with nipple retraction or loss of nipple should prompt immediate evaluation. Lesions recalcitrant to therapy also warrant investigation. The evaluation of these lesions should include complete bilateral breast examination with evaluation of the lymph nodes, mammography and biopsy of the involved skin.

Classify anticoagulants and enumerate the therapeutic applications in dermatology

Anticoagulants have been broadly categorized into heparins, vitamin K antagonists and direct inhibitors of thrombin and factor Xa. These can be administered orally or parenterally.

The therapeutic applications of anticoagulants in dermatology have been outlined in [Box 1]. 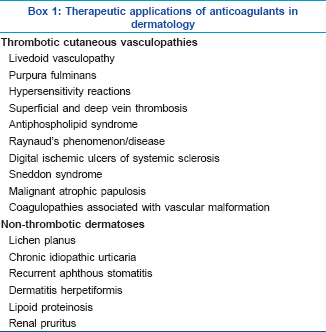 The dermatological adverse effects of anticoagulants and their clinical manifestations include the following:

It manifests as sudden onset pain which is followed by the development of well-demarcated erythema that evolves to hemorrhagic bullae, necrosis and eschar formation. Areas with abundant fat such as the breasts, abdomen, hips and buttocks are predominantly involved.

It commonly begins 5–15 days after heparin administration. Cutaneous microvascular involvement manifests as a well-demarcated, tender, purpuric rash with a characteristic retiform configuration and minimal erythema/inflammation. These may occur at the site of subcutaneous injection or at distant sites when heparin is infused intravenously and may progress to cutaneous necrosis and eschar formation.

It occurs 4–8 weeks after anticoagulation therapy in patients with an underlying asymptomatic or severe atheromatous disease. Cutaneous findings include livedo reticularis (most frequent), acrocyanosis (blue/purple toe syndrome) or acral gangrene with preserved peripheral pulses. Other manifestations include nodules, infiltrated plaques and purpura.

Various cutaneous reactions may be observed at the injection site of heparins such as purpura, ecchymoses, necrosis and infiltrated plaques. Calcinosis cutis, hypersensitivity reactions such as urticaria, angioedema and Baboon syndrome and patch test positivity can occur. Telogen effluvium and nail changes such as reduced growth, transverse bands and subungal hematomas have also been reported.

Pagetoid Bowen's disease is commonly confused with extramammary Paget's disease both clinically and histologically. It can also mimic other common conditions such as eczema, intertrigo, pruritus vulvae, erosive lichen planus and seborrhoeic dermatitis.

Which are the sites of involvement for extramammary Paget's disease?

Vulva is the most common area involved in extramammary Paget's disease. This is followed by the perianal area which is more frequently affected in men than women. Other sites of involvement include the scrotum, penis, eyelids, ears and axilla.

Histologically, extramammary Paget's disease is characterized by a collection of large cells with abundant pale cytoplasm and atypical round-to-oval nuclei (Paget's cell) and these are sharply demarcated from the surrounding keratinocytes. These cells can be arranged in nests and are located primarily within the lower levels of the epidermis and often demonstrate extension into cutaneous adnexal structures.

Histologically, pagetoid Bowen's disease demonstrates either single or groups of atypical keratinocytes which are present at all levels of the epidermis. Additional histological features include intercellular bridges between nested pagetoid cells, atypical cells and multinucleated cells between the nests of cells.

Describe the various trichoscopic patterns in different types of alopecia

The various trichoscopic patterns have been described in [Table - 4].

Which is the most important allergen in hair dyes?

Para-phenylenediamine is one of the most important antigens responsible for allergic contact dermatitis to hair dye. It is an effective dye ingredient that, when mixed with other ingredients, enables black or other color dyes to dye hair permanently.

What are the ingredients in permanent hair dyes?

The common ingredients include para-phenylenediamine, aminophenols, henna, toluene-2,5-diamine sulfate, pyrogallol, resorcinol, ferrous sulfate, oxidizers such as hydrogen peroxide and sodium perborate and other ingredients such as tartaric acid, glycerin, naphthol and cresols.

Which are the chemicals which can cross react with para-phenylenediamine?

Hair dye intermediate chemicals such as aminophenols and toluene-2,5-diamine sulfate can cross react with para-phenylenediamine.

Why does a patient experience an allergic reaction despite using hypoallergenic hair dye products?

Although many hair dye products available in the market are advertised as hypoallergenic, para-phenylenediamine-free, non-allergenic or herbal, they may contain either small amounts of para-phenylenediamine or other substances that cross react with para-phenylenediamine. Hence, allergic reactions can occur in a significant number of patients despite claimed safety. Patients with hair dye contact dermatitis must always choose their hair dye by checking the contents and undergoing sensitivity testing.

What are the types of lichen myxedematous?

Lichen myxedematosus is a form of idiopathic cutaneous mucinosis occurring in the absence of thyroid disease and characterized by abnormal dermal mucin deposition and fibrosis. The two types are a generalized papular and sclerodermoid form (scleromyxedema of Arndt–Gottron) with a monoclonal gammopathy and systemic manifestations and a localized papular form without systemic features.

Enumerate the salient clinical features and differential diagnosis in scleromyxedema

Scleromyxedema is characterized by widespread eruption of small, waxy papules on the upper limbs, thighs, trunk and head and neck region; the papules may be arranged in a linear pattern. There may be a diffuse sclerodermoid or hardened skin giving rise to leonine facies. The differential diagnosis includes systemic sclerosis, scleredema and nephrogenic systemic fibrosis.

What is the characteristic histological feature in scleromyxedema?

The characteristic feature is deposition of mucinous material (Alcian blue positive) between thick collagen bundles and abundant proliferation of fibroblasts in the upper and mid-reticular dermis.