Anagen effluvium, the shedding of anagen hair, leads to diffuse non-scarring alopecia. We report two cases of anagen effluvium in the same family secondary to the ingestion of tubers of Gloriosa superba, which contains the antimitotic alkaloid colchicine. Both patients developed anagen effluvium and gastroenteritis 1–2 weeks after consuming the tubers. In addition, one of them had bicytopenia, pleural effusion, hematuria and altered liver function tests. Both were managed conservatively and counseled regarding the reversible nature of the hair loss. Follow-up at 3 months showed regrowth of hair in both the cases.
Keywords: Anagen effluvium, gastroenteritis, Gloriosa superba

Hair growth occurs in a cyclic manner. At any given time, 85–90% of the follicles in the scalp are in the anagen phase, 10% in telogen and 1% in catagen. Anagen effluvium is the sudden loss of anagen hair and usually occurs 1–4 weeks after the insult.[1] Chemotherapy is a common cause but rarely, it can occur due to the ingestion of certain plants [Table - 1].[2] 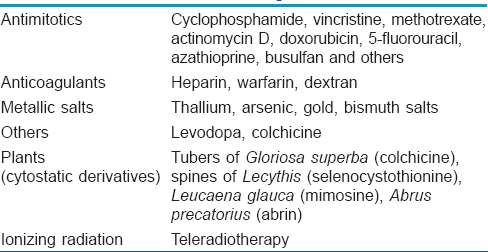 G. superba is a climbing perennial herb which is used in traditional medicine in Africa and India. All parts of the plant are poisonous, especially the tubers and seeds. Its toxicityis attributed to its major active alkaloid, colchicine.[3] Several cases of accidental poisoning with G. superba have been reported.[4],[5],[6],[7],[8],[9]

A 22-year-old man presented to the department of dermatology at the Indira Gandhi Medical College, Shimla with a complaint of diffuse hair loss from his scalp and beard for the last 7 days. One week before this hair loss, the patient had been admitted to a health center for gastroenteritis. His routine investigations were within normal limits and he was managed conservatively. He had mistakenly consumed the roots of a plant which mimicked a local vegetable 15 days prior to the onset of hair loss. This meal had also been consumed by other family members including his mother and aunt. Perhaps since the mother had consumed a smaller amount of the root, she remained asymptomatic.

The aunt of the above patient presented to the emergency department of our hospital with acute-onset diarrhea, vomiting and fever. The symptoms had developed 8–9 hours after ingestion of the same meal. On examination, she was conscious, febrile, dehydrated and hemodynamically stable. Bilateral infra-axillary crepitations were present on chest auscultation. The systemic examination was otherwise unremarkable.

A hemogram revealed bicytopenia with a total leukocyte count of 600/mm [3], neutrophil count of 324/mm [3] and platelet count of 20,000/mm [3]. The erythrocyte sedimentation rate was 80 mm in the first hour. Her serum transaminases were elevated with serum aspartate aminotransferase (SGOT) being 498 IU/L and serum alamine aminotransferase (SGPT) 136 IU/L. Renal function tests, serum electrolytes, thyroid function tests and serum ferritin were within normal limits. A chest X-ray showed bilateral pleural effusions. Urine routine examination revealed microscopic hematuria. Gastric lavage was done and the patient was managed conservatively. On the sixth day of admission, she experienced diffuse hair loss from the scalp.

Following ingestion of the root, hair loss started abruptly after 15 days in one case and after 6 days in the other. Hairs were shed painlessly in tufts while combing or with even a gentle pull. Hair was thin, short and unruly. There was no evidence of inflammation or scarring and there were no exclamation-mark hairs. In addition to the scalp, the beard region was involved in the man while his aunt had axillary and pubic hair loss as well [Figure - 1] and [Figure - 2]. Potassium hydroxide mounts of scalp and hair revealed no fungal elements. Hair microscopy revealed anagen hair [Figure - 3]. Histopathology in both patients showed most of the hair follicles to be in anagen phase without any evidence of inflammation [Figure - 4]. Meanwhile, the tuber which had been consumed was identified as G.superba [Figure - 5]. A diagnosis of anagen effluvium due to the intake of G. superba was made and both patients were counseled regarding the reversible nature of the hair loss. Family members were sensitized to create awareness in their region regarding the toxicity of this plant. Follow-up at 3 months showed regrowth of hair in both the cases [Figure - 6].

G. superb a has been used as a medicinal plant since ancient times for the treatment of gout, intestinal worms and wounds.[3] In Sanskrit, the plant is known as “garbhapatini” which causes abortion.[4] It has also been used to commit murder and suicide.[3] The plant which grows in tropical India, including the mid-hill zone of Himachal Pradesh,[10] contains many alkaloids such as colchicine, gloriosine, superbrine, chelidonic acid and salicylic acid, colchicine being the major active alkaloid.[5] The colchicine content in the plant varies from 0.1% to 0.3% in the tubers and 0.7–0.9% in the seeds.[3] The lethal dose of colchicine is about 6 mg/kg.[3] Heat may promote the liberation of colchicine from the plant.[6] The aunt had ingested a larger portion of the dish than the man and, perhaps therefore, developed more toxicity with multi-organ involvement.

Colchicine is antimitotic, and binding to tubulin, prevents its polymerization into microtubules, thereby arresting cell division in metaphase. Tissues with high turnover rates such as intestinal epithelium, hair follicles and bone marrow are affected leading to diarrhea, anagen effluvium and pancytopenia respectively.[5] The most common clinical presentation of colchicine poisoning is severe gastroenteritis which usually occurs within 2–6 hours of ingestion of the root.[5],[7] The patient may have multiorgan involvement with confusion, delirium, stupor, proteinuria, hematuria, oliguric renal failure, bone marrow hypoplasia, cardiotoxicity, respiratory distress and coagulopathy.[5],[6],[7],[8] With severe poisoning, death can occur due to shock, metabolic derangements and respiratory failure.[8]

Alopecia usually occurs 1–2 weeks after the poisoning.[8] Since scalp hair has the longest anagen phase, it is the most common site of hair loss, followed by the loss of terminal hairs at other sites.[1] Previous reports describe massive alopecia in a young female starting 12 days after the ingestion of G. superba tubers,[4] and G. superba poisoning in a young man leading to anagen effluvium, gastroenteritis and pancytopenia with liver and renal involvement.[9] Four children with colchicine poisoning who developed gastrointestinal symptoms, hepatotoxicity, cardiotoxicity, bone marrow suppression, hypocalcemia and hair loss have also been reported.[11] Diffuse hair loss has also been observed in patients of psoriasis on colchicine.[12] Loss of hair occurs most frequently after relatively large doses of colchicine which results at the sub-cellular level in nuclear pyknosis, disappearance of the nuclear membrane and complete nuclear disintegration. Anagen hairs may show structural changes such as matrix atrophy, shaft constriction and degeneration of the inner root sheath.[12] In anagen effluvium, hair loss is reversible because of the sparing of the quiescent stem cells in the bulge region of the follicle; the follicle resumes its normal activity once the precipitating factor has been removed.[1]

Massive alopecia is frightening and causes the patient much distress. A high degree of suspicion is required in any case of unexplained alopecia with gastroenteritis; such patients must be asked about the intake of plant roots as a meal or as traditional medicine. Spreading awareness in the general population about this plant is important to prevent such cases.