Clinico-epidemiological features of chronic urticaria in children: A retrospective analysis of 296 children from a tertiary care institute in Northern India

Background: Urticaria is a common dermatosis affecting approximately 25% of the population. Childhood chronic urticaria is frequently encountered, however, epidemiologic data on pediatric urticaria are limited.
Aim: The objective of this study was to study the clinico-epidemiological profile of children with chronic urticaria.
Methods: A retrospective study including children less than 14 years with chronic urticaria was conducted from January 2010 to December 2015. Detailed history, clinical examination, investigation results, treatment taken, and follow-up details were recorded on a prefixed proforma. As per the practice of the urticaria clinic, the children were investigated only in case of inadequate therapeutic response or had features of atopy/autoimmune disorders.
Results: Two hundred and ninety-six children (166 boys, 130 girls; mean age, 11.3 years) with chronic urticaria were included in the study. Urticaria was spontaneous in onset in 57.1% (169) children; precipitating factors were reported in 42.9% children, most common being physical factors, food allergy, drug intake and infections. Investigations were done in 48 (16.2%) patients; Antinuclear antibody was negative in all patients, raised serum IgE in 20/48 (41.6%), positive autologous serum skin test in 32/48 (66.6%) and raised anti-TPO titre in 10/48 (20.8%) children. A diagnosis of chronic spontaneous urticaria was made in 245 (82.77%) children, chronic dermographic urticaria in 35 (11.82%), cholinergic urticaria and drug-induced urticaria in 5 (1.69%) each, aquagenic urticaria in 4 (1.35%) and cold-induced urticaria in 2 (0.68%) children. Two hundred and fifteen (72.6%) children responded to nonsedating antihistamines alone, 61 (20.6%) required addition of a sedating antihistamine, 7 (0.02%) required addition of montelukast, 3 (0.01%) ranitidine and 10 (20.8%) required a short course of oral corticosteroids to control acute flare. None of the patients required any long-term immunomodulatory or immunosuppressive agent. The mean duration of treatment required was 3 to 12 months.
Limitations: The main limitation is the study being retrospective in nature with associated drawbacks of data loss. In addition, we did not use objective scoring system such as urticaria severity score and not all children were extensively investigated.
Conclusions: Chronic spontaneous urticaria is the most common type of chronic urticaria in children. Majority of these children can be managed conservatively with long-term antihistamines.

Urticaria is a heterogeneous group of disorders characterized by the development of evanescent pruritic wheals and/or angio-edema. It is classified into acute or chronic spontaneous urticaria and inducible urticaria.[1] Despite being one of the most frequently encountered dermatoses, epidemiologic data regarding urticaria is meagre, especially among children. The consensus statement on the management of urticaria from the Indian Academy of Dermatologists, Venereologists, and Leprologists and more recently the Position Statement on the use of omalizumab in urticaria, highlights the lack of epidemiologic data regarding urticaria in India.[2],[3] It also highlights the knowledge gap that exists in the management of pediatric urticaria. A systematic review concluded that children with chronic urticaria not caused by physical stimuli should undergo tests for allergy or infections only when there is a history of cause–effect correlation.[4] The lack of studies on epidemiology of urticaria in pediatric age group among Indian population prompted us to perform this study.

This was a retrospective study. Case records of urticaria patients attending the urticaria clinic at our institute (Postgraduate Institute of Medical Education and Research, Chandigarh) were screened from January 2010 to December 2015. All children aged <14 years with a clinical diagnosis of chronic urticaria of any subtype were included in the study. While making the diagnosis of urticaria and classifying it, the definitions proposed by EAACI/GA[2] LEN/EDF/WAO guidelines were taken into consideration (starting from the year 2009 and updated recently in 2014).[1]

A detailed history regarding the demographic characteristics (age and sex), disease duration and evolution, diurnal variation, seasonal variation, presence of coexistent angioedema, family history, aggravating or initiating factors, associated cutaneous or systemic illness and the management given was recorded on a prefixed proforma. Detailed clinical examination was performed in all patients. Tests for physical urticaria were performed according to the standard recommendations.[5] Drug-induced urticaria was confirmed with oral re-challenge tests. Investigations were done wherever indicated: clinically, due to inadequate response to treatment, and in the presence of history suggestive of atopy/autoimmune disorders, and were guided by their feasibility. These included complete blood count, erythrocyte sedimentation rate, stool examination for parasites, serum IgE, antinuclear antibody, thyroid stimulating hormone, anti- thyroperoxidase (TPO) antibody.

All patients were initially prescribed second-generation H1-antihistamine (levocetirizine, loratadine or fexofenadine). A stepwise approach of treatment was followed as per the EAACI/GA[2] LEN/EDF/WAO guidelines.[6] These medications were used in the recommended doses for the age. The patients were initially followed every 4 weeks for 1–3 months and every 2 months thereafter. Antihelminthic medications were used if stool examination showed parasitic infestation. Response to antihistamines in children was taken as greater than or equal to 75% improvement in symptoms, as assessed by the dermatologist, otherwise termed as unresponsive where the dose of antihistamines was hiked or second-line management was initiated. Remission was considered if symptoms did not recur for at least 3 months.

Data were expressed as individual values or mean ± S.D. For all quantitative variables, mean, median and standard deviation were calculated. Qualitative or categorical variables were described as frequencies and proportions.

The case records of 296 children were studied. [Table - 1] summarizes the baseline characteristics and management of study population. Urticaria was spontaneous in onset in 169 children. Personal/family history of atopy was present in 25% (74) children. Disease recurrence occurred commonly during late evenings or early morning. One hundred and twenty-seven children (42.9%) or their parents suspected an inciting cause. However, among the children with suspected food allergens, on a more detailed history, none reported a consistent and reproducible relationship between food intake and onset of urticarial rash. None of the children reported any gastrointestinal symptoms with food intake. Investigations were advised in 48 (16.2%) patients. Based on history and investigations, 245 children were offered a diagnosis of chronic spontaneous urticaria, 35 had chronic dermographic urticaria, cholinergic urticaria in 5, drug-induced urticaria in another 5, aquagenic urticaria in 4 and cold-induced urticaria in another 2 children [Figure - 1]. 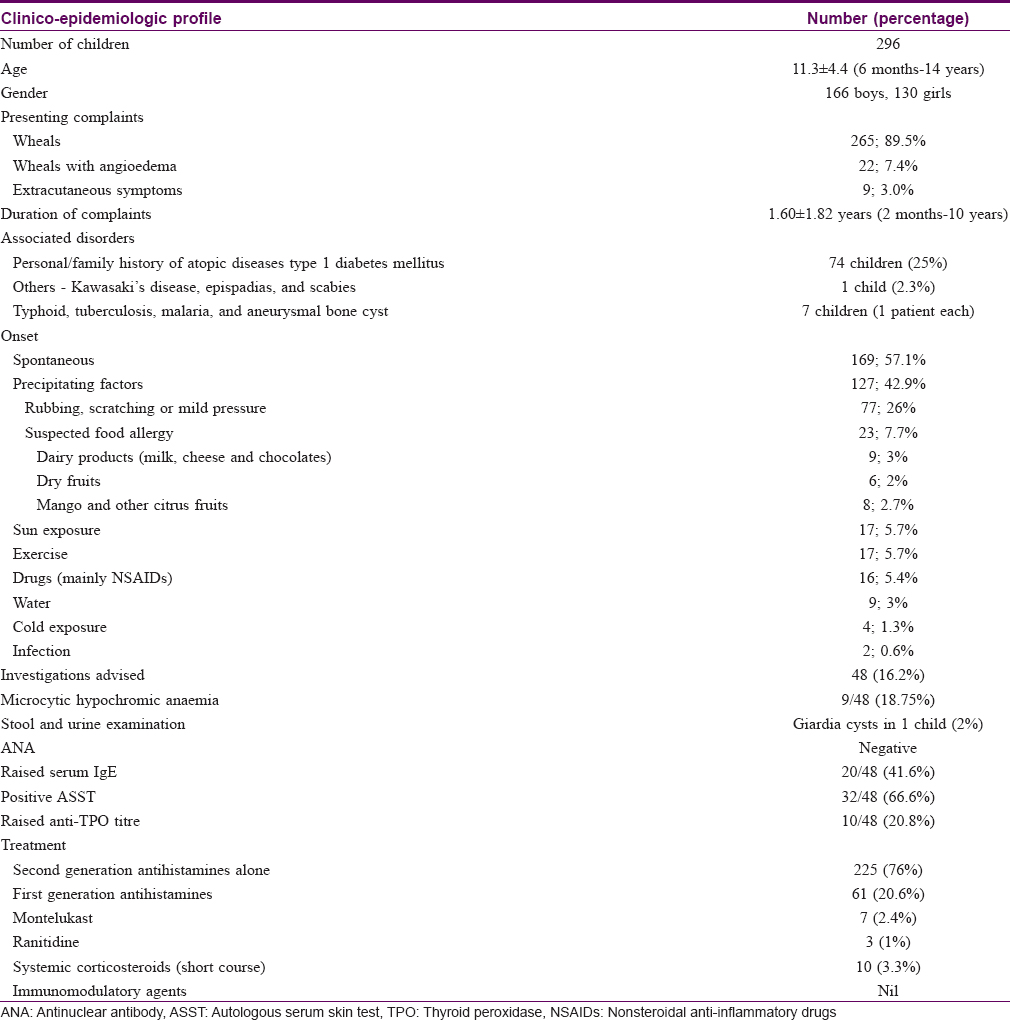 Table 1: Summarizing the baseline characteristics and management of the study population

The duration of treatment required varied between 3 months and 12 months. Average duration of follow-up was approximately 4 years. During follow-up, 280 (94.5% children after regular treatment for 5–6 months had only occasional wheals, following which antihistamines were given only when required. Majority of the children, i.e. 272 (91.8%) were on regular follow-up while the rest were lost to follow-up after a variable period ranging from 1 to 6 months. All children were treated with non-sedating, second-generation antihistamines initially followed by the application of a stepwise approach depending on their therapeutic response. No serious side-effects were observed in our study cohort. Ten children required short and tapering courses of oral corticosteroids (0.3 mg/kg/day for 7 days) to control an acute flare of disease activity. The cause of flare in these children was not known. Three of these children had positive autologous serum skin test and 1 had raised anti-TPO titre. None of the patients required any long-term immunomodulatory or immunosuppressive agent.

Population-based data on childhood urticaria are relatively few. Around 0.1% to 3% of the children are diagnosed with chronic urticaria.[7] In a noninterventional birth cohort study, 5.4% of 404 participating, 6-year-old children were reported to have had at least a single episode of urticaria during the last one year.[8]

Urticaria was spontaneous in onset in 57.1% (n = 169/296) children in our study. Various precipitating factors were reported/suspected in 42.9% children, the most common being physical factors, followed by food allergy, drug intake and infections. Later, this was confirmed in 51 out of 296 (or in 17.3%) children. This is not too dissimilar to the findings by Kozel et al. who reported that the etiology of chronic urticaria in children is established in only 25% cases despite investigations; the remaining cases are aptly designated as chronic spontaneous urticaria, a group which includes both autoimmune and idiopathic urticaria.[11] Similar results were observed by Volonakis et al. and Sackesen et al.[10],[12] Thus, chronic spontaneous urticaria appears to be the most common type of chronic urticaria in children. Various aetiological factors were associated with approximately 20–25% cases of chronic urticaria; 17.23% in our study cohort.

A positive autologous serum skin test was observed in 10.81% (32) children, indicating the role of autoreactivity in childhood chronic urticaria. Different studies on chronic urticaria in children, demonstrated a positive ASST in 38–47% patients.[9],[13],[14] Several autoimmune conditions have been associated with childhood urticaria.[15] Caminiti et al. conducted a study in antihistamine resistant cases of chronic childhood urticaria and found 9.5% cases demonstrated antithyroid autoantibodies.[16] Kilic et al. reported a 14.8% prevalence of thyroid autoimmunity in children with chronic urticaria,[17] whereas Levy et al. reported a prevalence of 4.3%.[18] Because most patients with thyroid autoimmunity remain clinically euthyroid, thyroid autoantibodies are likely to represent an underlying autoreactive predisposition rather than being themselves pathogenic. In our study, 3.38% (10) children had a raised anti-TPO titre, 1 child had type 1 diabetes mellitus. Antinuclear antibody was negative in all the children in whom it was done.

Management of childhood urticaria includes identification and elimination of precipitating factors and antihistamines for symptomatic relief.[19] A recent systematic review analyzing 9 reports (633 children) concluded that H1 antihistamines are effective and safe in children, although many other options such as cyclosporine, omalizumab, montelukast and cefuroxime have been tried.[20] Majority of the children in our study achieved adequate control of their disease with second-generation antihistamines. In our study, sedating, first-generation antihistamine was added for 20.6% (61) children to control their symptoms as itching was interfering with their sleep. No side-effects were observed in our study, which could be attributed to the retrospective nature of the study and recall bias. In a study by Lee et al. on the management of chronic spontaneous urticaria, 96.9% children achieved control with second-generation antihistamines.[21] Montelukast is licensed for pediatric use, but there are very few studies assessing the effectiveness of adding montelukast to antihistamine treatment of urticaria in children. Corticosteroids can control urticaria effectively; however, should be used only in selected severe cases and exacerbations and only for short periods due to the potential side-effects of chronic use.[22] H2 blockers such as ranitidine along with H1 antihistamines have also been used in chronic refractory childhood urticaria. However, further studies are needed to prove their efficacy.

An average follow-up for a period of 4 years was done in our study. All children regularly followed up with us and most of them (n = 272; 91.8%) after a treatment period of 5–6 months presented with only occasional wheals, following which the antihistamines were stopped and given only when required.

There are several limitations of the present study. Being retrospective in nature, there was missing data for many variables. The mean antihistamine dosing was difficult to calculate accurately because different brand names of drugs were mentioned in case record sheets and missing data at places. Lack of objective evaluating scores such as urticaria activity score is a limitation in this retrospective study/chart review. Similarly, investigations were not carried out in all patients and were not exhaustive. Food challenge tests were not carried out partly due of lack of feasibility in children and partly due to inconsistent history.

Urticaria in children is most commonly spontaneous in onset, and most of the children can be managed conservatively with long-term antihistamines and without extensive and elaborate investigations.

The authors certify that they have obtained all appropriate patient consent forms. In the form, the legal guardians have given consent for their children's images and other clinical information to be reported in the journal. The guardians understand that names and initials will not be published and due efforts will be made to conceal patient identity, but anonymity cannot be guaranteed.