Cutaneous plasmacytosis is a rare disorder of uncertain etiology, described mainly in patients of Japanese descent. Clinically, it is characterized by multiple pigmented papules and plaques distributed primarily on the trunk. Histopathologically, it is marked by a dense dermal plasma cell infiltrate. Here, we describe a case of cutaneous plasmacytosis in a 55-year-old Indian male who presented with hyperpigmented plaques on the body. Histopathological examination revealed dense superficial and deep perivascular and periappendageal infiltrate composed mainly of plasma cells, lymphoid follicles with reactive germinal centres, perineural distribution of plasma cells, mast cell infiltration and increased dermal small blood vessels. Immunohistochemical analysis confirmed the polyclonal nature of the plasma cells. Laboratory investigations were within normal limits, except for the presence of polyclonal hypergammaglobulinemia without any M band. There was no evidence of autoimmune disease or any infection. There was no systemic involvement in this patient. The patient was diagnosed as cutaneous plasmacytosis and advised long-term follow-up. Peculiar histopathological finding in this case of cutaneous plasmacytosis was the presence of abundant mast cells in the dermis.

A 55-year-old Indian male presented with asymptomatic, widespread, progressive, hyperpigmented lesions over the body for the last 6 years. He gave a history of multiple treatments taken in the form of oral prednisolone (dose 20–40 mg/day), oral antibiotics (doxycycline 100 mg/day), topical clobetasol propionate 0.05% cream, etc., with minimal relief. Cutaneous examination revealed multiple, scattered, dark brown-colored, nontender, infiltrated, nonscaly plaques and papules of varying sizes (ranging from 0.5 cm to 3 cm) and shapes (oval, elongated and irregular) distributed symmetrically onthe neck, trunk, axilla, upper arms and thighs in a Christmas tree-like pattern [Figure - 1]a and [Figure - 1]b. Face, palms and soles were sparedstroking the lesions did not induce wheal and flare response (negative Darier's sign). On general physical examination, there was no lymphadenopathy or hepatosplenomegaly. The patient was otherwise healthy with no other relevant past medical history. Our differential diagnoses were cutaneous mastocytosis, lymphoma, leukemia and secondary syphilis.

Skin biopsy from an abdominal plaque revealed epidermal acanthosis along with increased melanin pigment in the basal layer. The dermis showed superficial and deep nodular perivascular and periappendageal lymphoplasmacytic infiltrate with predominance of plasma cells [Figure - 2]a. Some of the nodules had lymphoid follicles, with reactive germinal centres, surrounded by plasma cells [Figure - 2]b. Plasma cells had small and uniform-sized nuclei [Figure - 2]c. Perineural distribution of plasma cells was also present at places [Figure - 2]d. Mast cells were found to be increased in number in the dermal interstitium, as evidenced by Giemsa stain [Figure - 2]e. A mild interstitial infiltrate consisting of lymphocytes and histiocytes was also observed. Dermal small blood vessels were also increased in number.

Immunohistochemical examination showed plasma cells positive for CD138 [Figure - 3]a and a polyclonal staining pattern with kappa and lambda light chains in a ratio of 1:1 [Figure - 3]b and [Figure - 3]c.

Based on the above findings, cutaneous plasmacytosis was diagnosed. The patient declined any further treatment at this time. The patient was advised long-term follow-up to monitor possible development of any systemic involvement.

Cutaneous plasmacytosis has a characteristic clinical presentation in the form of multiple, asymptomatic, infiltrated, dark-brown, irregularly-shaped macules, plaques and flat tumors located primarily on the trunk with particular involvement of axilla. The lesions are commonly distributed in a Christmas tree-like pattern.[1] Cutaneous lesions are commonly associated with polyclonal hypergammaglobulinemia.

The most common manifestation of extracutaneous involvement is superficial lymphadenopathy. Other less frequently involved sites include bone marrow, lung, liver, spleen and kidney.[5]

Histopathologically, cutaneous plasmacytosis is marked by dense superficial and deep perivascular and periappendageal infiltrate composed mainly of plasma cells along with few lymphocytes and histiocytes. Plasma cells are mature without any evidence of atypia. Other less commonly described features include perineural distribution of plasma cells and lymphoid follicles with reactive germinal centres.[6]

Increased basal layer melanin pigmentation is a commonly described feature of cutaneous plasmacytosis, the reason for which remains unclear. 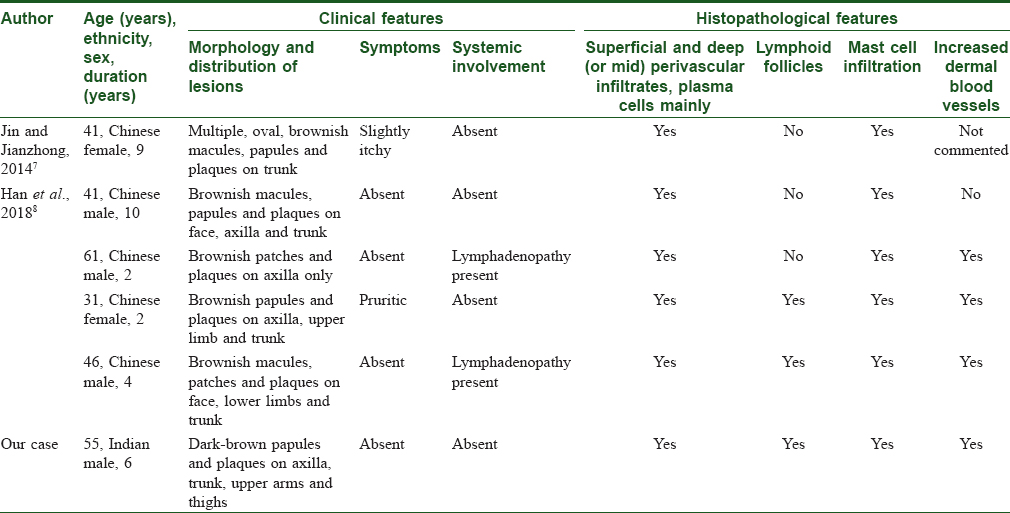 Raised interleukin-6 levels are reported in some patients of cutaneous and systemic plasmacytosis.[6] We could not assess our patient's serum interleukin-6 level due to the unavailability of this test in our institution. Increased dermal small vessels were found in our case, and similar finding has been previously described in three patients by Han et al. [Table - 1]. These findings suggest the possible role of mast cells in cutaneous plasmacytosis. The presence of mast cells in cutaneous plasmacytosis may have treatment implications. The agents that interfere with interleukin-6 activity can be potential therapeutic agents. Thalidomide has been used and found to be effective in a case of cutaneous and systemic plasmacytosis based on the same mechanism.[13] Multicentric plasma cell variant of Castleman's disease is a rare type of reactive lymphadenopathy characterized by systemic involvement in the form of fever, cytopenias, thrombocytosis, hypergammaglobulinemia, splenomegaly, hepatomegaly and pulmonary involvement. Rarely, cutaneous involvement occurs in multicentric plasma cell variant of Castleman's disease with histopathological features of dermal and subcutaneous nodular plasma cell infiltrates, vascular proliferation and abortive germinal centres. Increased serum interleukin-6 levels have also been frequently seen in multicentric plasma cell variant of Castleman's disease.[14] Based on these findings, some authors have suggested “cutaneous and systemic plasmacytosis” to be a variant of multicentric plasma cell variant of Castleman's disease.

Since our case did not have any lymphadenopathy or any other systemic involvement, it fits better with cutaneous plasmacytosis.

Cutaneous plasmacytosis has a chronic benign course with an overall favorable prognosis. There is no standard effective treatment for this condition, and different treatment options have been tried with limited success.[5]

Here, we documented a case of cutaneous plasmacytosis in a 55-year-old Indian male. Our case represents one of the less frequently described histopathological manifestations of cutaneous plasmacytosis in the form of presence of numerous mast cells, increased dermal small blood vessels, lymphoid follicles with reactive germinal centres and perineural distribution of plasma cells along with classical dense dermal plasma cell infiltrates. This case expands the histopathological spectrum of this recently recognized enigmatic entity.