Introduction: Leprosy or Hansen's disease is a chronic debilitating disease caused by Mycobacterium leprae. Host genetics are believed to strongly influence the course of the disease. It is known that cytokines play an important role in leprosy and cytokine gene polymorphisms probably influence the course of the disease.
Methods: In the present study, we evaluated 70 patients with leprosy and 243 controls. DNA was extracted from the peripheral blood and genotyping was done for the following polymorphisms: IL-1 RA intron 2, IL-1β-511 C/T and TNF-α A/G.
Results: A strong association of TNF-α-308 G/A polymorphism with Hansen's disease with both genotypes and alleles was found. However, no correlation was identified between the other two polymorphisms and Hansen's disease. A strong association between the IL-1β gene polymorphisms and the type of reactions seen in leprosy was found. In contrast, the other two polymorphisms did not show any such association.
Limitations: Genetic polymorphisms are association studies. They are not a direct reflection of the transcriptome or proteome and this is a major limitation of this study.
Conclusion: In conclusion, cytokine gene polymorphisms appear to influence the susceptibility and course of Hansen's disease. An evaluation of the cytokine levels in the skin during lepra reactions would confirm this observation. Possibly, in future, this would be a guide to therapeutic decisions in cases of lepra reactions.

Leprosy or Hansen's disease is a chronic debilitating disease caused by an obligate intracellular pathogen—Mycobacterium leprae (M. leprae). The clinical spectrum of the disease varies and it depends on the host immunity; one pole is tuberculoid leprosy in which the patients have a strong cellular immune response and the other pole is lepromatous leprosy (LL) where patients have a limited cellular immune response leading to a disseminated disease with diffuse infiltration of skin and nerves and bacilli-loaded foamy macrophages. Between the two poles, the majority of patients are borderline classified as borderline tuberculoid (BT), mid-borderline (BB) or borderline lepromatous (BL).[1],[2]

Factors influencing the type of leprosy are not well understood. Host genetics are believed to strongly influence the course of the disease. Cytokines play a critical role in triggering host-pathogen interaction in leprosy. The onset of tuberculoid leprosy is correlated with cytokine production by Th1 cells (IFN γ productions) and lepromatous leprosy is correlated with a Th 2 response (IL-4 production). Besides IFN and IL-4, other cytokines produced by T cells such as tumor necrosis factor-alpha (TNF-α), IL-6 and IL-10 and by macrophages such as IL-1 family also regulate M. leprae cell-mediated and humoral immune responses.[3],[4],[5],[6],[7]

Leprosy reactions are immune inflammatory-related phenotypes that may occur before diagnosis, during treatment or after Multi Drug Therapy (MD T). Lepra reactions require immediate treatment to prevent permanent disabilities. There are 2 major types of lepra reactions. Type I reaction is characterized by acute inflammation of preexisting skin lesions or by the appearance of new lesions and/or neuritis. Systemic symptoms are rare. Type I reactions are seen in patients who have an unstable immune response (BT, BB and BL forms)[8] or in patients with tuberculoid leprosy.[9],[10] Erythema nodosum leprosum is the main presentation of type II reaction which predominantly affects patients with leprosy showing Th2 immune response and high bacterial load. It is classified more toward the lepromatous pole (BB, BL, and LL) of the disease. Type II reaction is characterized by increased levels of TNF-α and immune complex–associated vasculitis, panniculitis and uveitis.

Cytokine gene polymorphisms have recently attracted considerable interest since it has been discovered that different alleles of cytokine genes are associated with different immunomodulatory diseases.[11],[12] Genes encoding cytokines and related molecules harbor polymorphic regions which are considered to alter gene transcription and thereby influence inflammatory processes in response to infectious disease.[13],[14] Some important cytokines that are known to harbor polymorphic regions are encoded by the genes of the interleukin-1 cluster and TNF-α.

In this prospective case-control study, we attempted to evaluate the genetic polymorphisms of the TNF-α, IL-1 RA and the IL-1β genes in patients of Hansen's disease and compare the same with a control population with no evidence of Hansen's disease. We also attempted to evaluate the same genetic polymorphisms in patients showing reactions and compare the same with patients who did not show any reaction.

In the present study, we evaluated 70 patients with leprosy and 243 controls. The controls were age and sex matched and they were healthy individuals with no history of leprosy. The entire spectrum of Hansen's disease was included including tuberculoid, lepromatous, borderline tuberculoid, borderline lepromatous, borderline leprosy, pure neuritic and histoid leprosy. We also included patients with deformities which included claw hand, lagopthalmos and foot drop. Finally, cases who had undergone a reaction after therapy were also included in the study. These included patients with the type I and II reactions, neuritic and late reversal reactions. Ethical clearance was obtained for the study from the ethical committee of Command Hospital Southern Command.

Two milliliter of blood was collected from all these patients and controls. Genomic DNA was retrieved from the peripheral blood by using a standard kit (Quiagen).

For restriction fragment length polymorphism analysis of the 511 IL-1β polymorphism, the polymerase chain reaction products were first amplified. The confirmation of a successful polymerase chain reaction was done by running the products on a 2% agarose gel. If the products were present, they were digested with 10 U of Ava 1 at 37°C for 3 h. Fragments were analyzed by electrophoresis on 3% agarose gel and stained with ethidium bromide. This yielded products of 304 bp (TT allele), 190 bp and 104 bp (CC allele) and 304, 190 and 104 bp (CT allele). The T allele was the proinflammatory allele.

Table 1: The primer sequences and the restriction enzymes of the cytokine gene polymorphisms 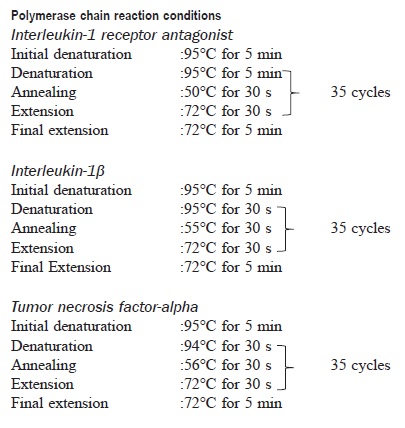 The sample size was calculated as 31 using the EPI INFO software. The results of the study were statistically analyzed using SPSS 16.0 statistical package program (Statistical Package for Social Sciences, Lead Technologies Inc, USA). The descriptive data were given as mean and standard deviation. The Chi-square test was used to compare the differences between groups. A value of P < 0.05 was considered to indicate statistical significance.

The clinical diagnosis of the patients is shown in [Figure - 1]. In addition, all the patients were on multidrug therapy and no other therapeutic intervention was performed during the course of the study. The diagnosis of leprosy was confirmed by clinical examination, histopathology and slit-skin smear examination.

The types of reactions seen in different patients are shown in [Figure - 2]. In addition, it must be mentioned that all the patients who had reactions were treated by standard protocols.

The types of deformities seen in different patients are shown in [Figure - 3].

In controls, all the frequencies of tested genotypes and alleles were in Hardy–Weinberg equilibrium. There was no association between the different IL-1 RA alleles with the cases and the controls (P = 0.46).

Association of genetic polymorphisms with the presence of a reaction

There was no association between the TNF-α gene polymorphisms and the type of reaction (P = 0.310). The results are tabulated in [Table - 5].

There was no association between the IL-1 RA gene polymorphisms and the type of reaction (P = 0.830). The results are tabulated in [Table - 6].

There was a strong association between the IL-1β gene polymorphisms and the type of reaction (P = 0.009). The results are tabulated in [Table - 7].

We had a total of 15 patients who had deformities. However, because the number of cases was small, we could not perform a statistical analysis to evaluate whether the genetic polymorphisms were associated with the deformities.

We believe that this study provides an insight into the pathogenesis of lepra reactions. The polymorphism analysis suggests that there is an increase in the amount of cytokine produced. This finding has been confirmed in a study which measured the levels of the cytokines during reaction states and stated that the levels of TNF-α and IL-1β are elevated in leprosy reaction states.[34] These cytokines are responsible for the aggravation of the lepra reactions. Perhaps, cytokine inhibitors if administered would decrease the severity and duration of the reactions.

The limitation of this study is two. First, any study involving genetic polymorphisms is an association study. Transcriptomics and proteomics give a real-time picture of the changes during the course of the disease. However, in this study, evaluation of the cytokine levels would have been of little or no utility because the levels fluctuate considerably in the body and a single point measurement would not necessarily have given, a true picture. The second limitation was the sample size which appeared small. However, statistical software confirmed that the sample size was adequate considering the rarity of the disease.

Genetic polymorphisms are association studies. The DNA polymorphism may or may not have a relation to the transcriptome or the proteome in the tissue at that particular time. This would be a major limitation of this study.