Palmoplantar psoriasis (PPP) that accounts for 3 - 4% of all psoriasis cases, produces significant functional and social disability. [1] There is paucity of literature on the clinical study of palmoplantar involvement in psoriasis. The present study describes the clinical features in 154 consecutive patients with palmoplantar involvement in psoriasis. This was a prospective clinical study of consecutive patients of palmoplantar involvement in psoriasis presenting to the Dermatology Outpatient Department (OPD) of our institute from 2006 to 2008. A total of 154 patients were recruited. They included 111 men (72%) and 43 (28%) women. A majority of the cases, that is, 103 (66.8%) were in the age group of 21 - 50 years. The disease was common among farmers, manual laborers, and housewives (53 cases - 34.4%). Only palmar involvement was seen in 24 cases (15.6%), only plantar in 22 (14.3%), both palmoplantar involvement in 75 (48.7%) cases, and palmar and / or plantar involvement with psoriasis elsewhere in 33 (21.4%) cases. One hundred and twenty-six patients (81.8%) were symptomatic, of whom 80 (51%) complained of pain in lesions, 15 (9%) of itching, 31 (20%) had fissuring, while 28 (18.2%) cases were asymptomatic. Seasonal variation was observed in 62 (40.25%) patients with winter exacerbation in 44 cases. Ten cases (6.5%) complained of disease aggravation with use of soap, two with household work, and one each with trauma, wearing of slippers, or doing field work. Of the relieving factors, none could be observed in 67 (43.5%) patients, while 26 (16%) felt symptomatically better in summer, 10 (6%) in winter, and 51 patients (33.1%) with various allopathic and homeopathic medications.

Family history of psoriasis was present in six (3%) patients only.

On examination, the lesions were symmetrically distributed in 122 (79%) patients [Table - 1]. Associated nail involvement was observed in 64 (41%) cases. The most common nail changes were coarse pitting (30 patients), subungual hyperkeratosis (24 cases), and longitudinal ridging (18 patients). Associated joint pain and swelling, suggestive of arthritis, was observed in nine (5.8%) cases. However, diagnosis of psoriatic arthritis was not established in these cases. The prevalence of PPP was less than 1%; involvement of palms and soles occurred in 2.8 - 40.9% of the psoriatic patients. [1] Kumar et al.[2] noted palmoplantar lesions in 17.4% of the psoriatic patients. 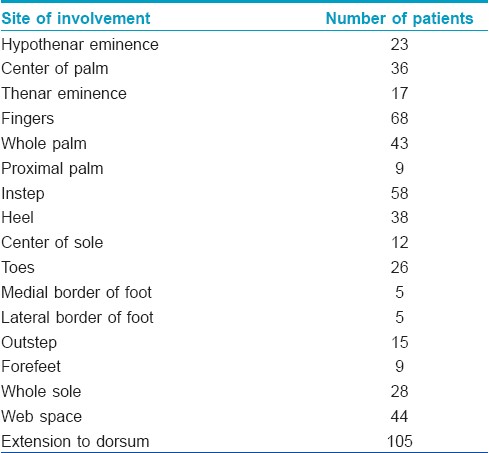 Table 1: Sites of distribution of lesions in the patients involved in the study

In our study, male patients outnumbered female cases in contrast to the Kumar et al. [2] and Chopra et al. [3] studies, in which both men and women were almost equally involved. Disease was more common in farmers, manual laborers, and housewives in our study, which could be explained by Koebner′s phenomenon. In the Kumar et al.[2] study, 40% of the male patients were manual laborers, while there was a preponderance of housewives among the female cases. A majority of our patients (48%) had both palm and sole involvement, with an equal number (approximately 15% each) showing only palmar or plantar involvement. In the Kumar et al.[2] study, plantar involvement was twice more common than palmar involvement (91% versus 55%). They attributed this to the Indian custom of walking barefoot or wearing open slippers. The lesions of PPP were typically bilaterally symmetrical although unilateral involvement could be seen on the dominant hand of manual workers. In our study, the lesions were symmetrically distributed in 79% of the patients. The sites of involvement over the palms were typically pressure points, such as, the thenar and hypothenar eminences, with the center or distal aspect being less frequently affected. In our study, involvement of the fingers was seen in 44% of the patients, while thenar and hypothenar eminences were involved in 11% and 15% of the cases, respectively. The soles, instep, sides of feet, and heel were commonly involved. Less frequently, the distal sole and toes were involved. This pattern was also observed in our patients. In the Kumar et al.[2] study, the pressure sites were most commonly involved over the palms, while on the soles, discrete plaques were seen, distributed randomly. Extension of the lesion on to the dorsa of the palms and soles was present in 68% of our cases, while Kumar et al.[2] reported this feature in 45% of the patients. Involvement of web spaces was observed in 28% of our cases, but in only 8% of the Kumar et al.[2] cases. They explained web space involvement by the high prevalence of maceration in a tropical country like ours and to the design of Indian footwear.

Symptoms represent a serious disabling factor in patients affected by psoriasis. Eighty-two pecent of our patients were symptomatic. Sampogna et al.[4] reported itching in 67.6% of PPP, while others were distressed by irritation, bleeding, burning, and so on. Seasonal variation was observed in 40% of our patients, with a majority reporting winter exacerbation. In the Chopra et al.[3] study, 18.75% of the cases had winter exacerbation. Mier et al.[5] reported exacerbation of PPP in 40%, due to occupation, while 6.5% of our cases complained of disease aggravation with use of soap, and only two (1.3%) with household work.

When making a diagnosis of PPP, it is important to exclude other morphologically similar acquired conditions such as hyperkeratotic eczema, contact dermatitis, pityriasis rubra pilaris and tinea manuum or pedis. Dermatophytosis is frequently unilateral or asymmetric and easily treatable. Hyperkeratotic eczema is challenging to distinguish and may overlap with psoriasis, although it usually does not have the degree of erythema or the well-demarcated nature of psoriasis. Hyperkeratosis over the knuckles favors psoriasis. The term ′PsEma′ has been coined, wherein the clinical, molecular, and therapeutic responses show the characteristics of both conditions.