We would hereby like to report a case of subcutaneous panniculitis-like T-cell lymphoma (SPTCL), presenting as a persistent swelling over face.

The World Health Organization–European Organisation for Research and Treatment of Cancer classification defines SPTCL as a tumor confined to the subcutaneous fat composed of αβ CD8 cytotoxic lymphocytes, having an intermediate prognosis.[1]

A 25-year-old, Hindu, married male, resident of central India, presented with the chief complaint of intermittent swelling over face for 10 months, persistent since 6 months, occurring initially over both lips, which then spread to involve both cheeks, front and sides of neck, and bilateral periocular areas. The patient also developed progressive hoarseness of voice, for the last 6 months associated with inability to close the eyes fully. Cutaneous examination revealed bilaterally symmetrical, woody hard facial swelling extending from the forehead up to the submandibular and submental regions and laterally up to the ears. After about 3 months, the swelling became persistent and was associated with appearance of linear purpura predominantly noted over the forehead and front and sides of neck [Figure - 1]. There was no palpable cervical lymphadenopathy. The patient was treated as recurrent angioedema by other dermatologists, before presenting to our center, with initial partial response to treatment.

The laboratory and radiological investigations that were conducted have been briefly outlined in [Table - 1]. [Figure - 2] shows the histopathological and immunohistochemical findings.

A persistent, progressive leucopenia and thrombocytopenia, raised reticulocyte count and serum ferritin levels accompanied with hepatosplenomegaly and fever were suggestive of hemophagocytosis. Taking this into consideration along with the histopathological and immunohistochemical profile, a diagnosis of SPTCL was confirmed.

The patient was started on intramuscular methotrexate 15 mg/week and tapering doses of prednisolone, leading to a resolution of facial swelling and apparent lipoatrophy [Figure - 3] and return of all the hematological parameters to near normal values by 12 months.

Several cases of cutaneous lymphomas presenting as facial plaques, nodules and facial nerve palsies, as well as cases presenting with facial swelling, have been published so far. A comparative analysis is summarized in [Table - 2]. 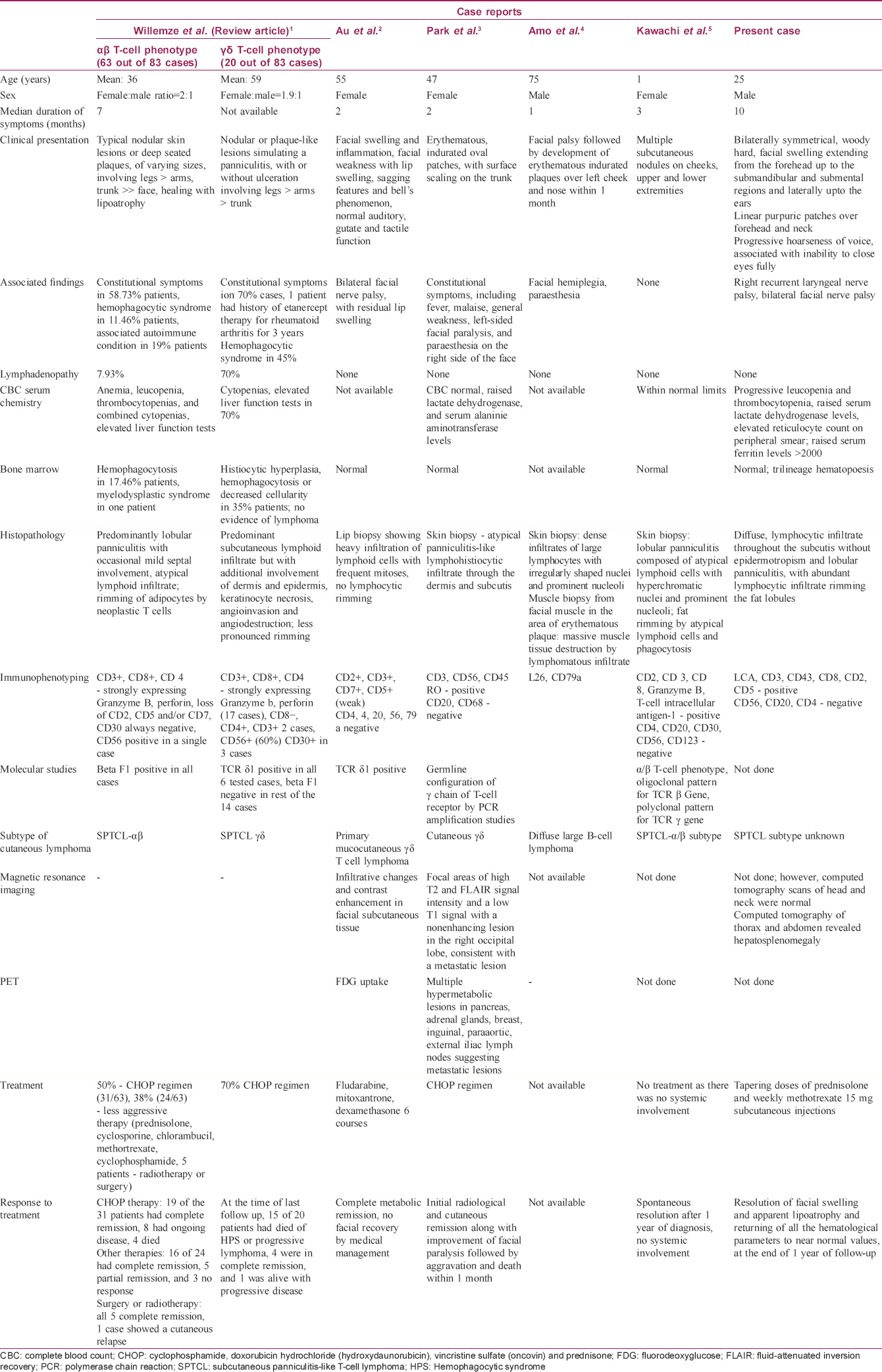 Our limitation in this case is the lack of T-cell receptor gene rearrangement studies for molecular subtyping of this case into α/β or γ/δ types, as well as absence of positron emission tomography studies, due to a resource-poor setup.

The gradual clinical course of the disease in our case coupled with an excellent response to less aggressive systemic therapy favor the relatively indolent nature of SPTCL. However, involvement of cranial nerves has usually been noted in the more aggressive forms of this disease. The rare, but unique diagnosis of SPTCL should definitely be kept in mind while assessing any case of facial swelling.