Intralesional mumps, measles and rubella vaccine in the treatment of cutaneous warts

Warts or verrucae are known to be recurrent and may be resistant to treatment. Most of the routinely used treatment modalities are destructive in nature and can cause scarring. The realization that the immune system plays an important role in the control of warts has led to the concept of immunotherapy for this condition.

The basis of immunotherapy is the manipulation of the immune system to achieve a human papilloma virus-targeted immune reaction. Various immunotherapeutic approaches have been attempted using topical contact sensitizers, oral immunomodulators, interferons and various viral, fungal and bacterial antigens which are administered intralesionally or intradermally. These interventions are thought to influence the release of different cytokines such as interleukin-2, interleukin-4, interleukin-5, interleukin-8, interferon-γ and tumor necrosis factor-α that stimulate a strong immune response against human papilloma virus.[1] Antigen injections are also thought to be associated with the proliferation of peripheral blood mononuclear cells that promote Th1 cytokine responses and further activate cytotoxic T-cells and natural killer cells to eradicate human papillomavirus-infected cells.[1]

One hundred patients of age ranging from 10–45 years attending the dermatology out-patient department of Rabindra Nath Tagore Medical College, Udaipur and attached hospitals with the clinical diagnosis of cutaneous warts were included in the study. Patients were recruited irrespective of the number and duration of the warts and whether they had been previously treated or not, as long as they had not taken any treatment in the 2 months preceding enrollment. Eighty six patients completed the study. Baseline characteristics of the patients are presented in [Table - 1]. 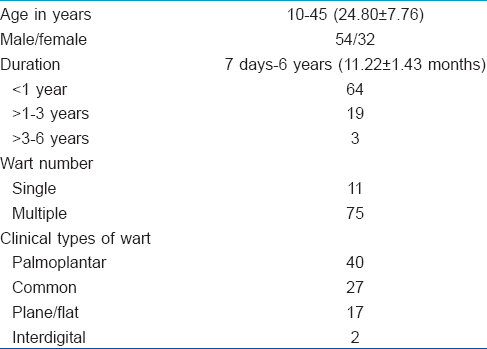 Table 1: Baseline characteristics of the patients

Mumps, measles and rubella (MMR) vaccine (Tresivac, Serum institute of India, Pune, India) is a freeze-dried preparation of live attenuated strains of measles, mumps and rubella viruses (0.5 ml/dose). A single dose ampoule of the injection costed Rs. 99 to the patient at the time of our study. The vaccine was reconstituted and a volume of 0.3 ml was injected with an insulin syringe into the wart or into the largest wart in patients with multiple warts. This was repeated every 3 weeks until complete clearance of all the warts or for a maximum of 3 treatment sessions. Patients were assessed at the beginning of the study and during each treatment session to assess the reduction in the size and number of warts. They were followed up every 2 months for a period of 6 months to detect any recurrence.

Complete clearance was achieved in 40 (46.5%) of 86 patients [Table - 2] and [Figure - 1]. To achieve complete response, the mean number of intralesional injections required were 2.41 ± 0.68 and the mean duration was 7.15 ± 2.07 weeks. Partial response was achieved in 18 (20.9%) patients [Table - 2] and [Figure - 2]. Of the 50 patients who had multiple warts, 41 (82%) had clearance of their distant warts too, although the vaccine was injected only into the largest wart [Figure - 2]. A statistically significant inverse correlation was found between the duration of warts and the degree of response (r = −0.283 P = 0.008, Pearson correlation test), indicating that patients with shorter disease duration responded better [Table - 3]. Three (5%) patients had recurrence of their warts during the 6 month follow-up period. The treatment was well tolerated. Pain at the injection site (46 [53.5%]), erythema (7 [8.1%]) and post-inflammatory hyperpigmentation (5 [5.8%]) were the main adverse effects noted in the treated patients.

Table 3: Response to treatment in relation to the duration

There have been many open-labelled studies using other immunotherapeutic agents for the treatment of warts. With Mw vaccine, Singh et al. and Meena et al. observed complete response in 54.5% and 83% patients respectively along with response in distant warts in 86.3% and 70% patients respectively.[2],[3] Horn et al. found no difference in response among the individual antigens (Candida, 59%; mumps, 51%; Trichophyton, 62%; P = 0.48).[1] Nofal et al. evaluated mumps, measles and rubella (MMR) vaccine in a randomized placebo-controlled trial and noted a complete response in 81.4% of patients in the vaccine group compared to 27.5% in the placebo group.[4]

The response in different studies varies with the antigen and therefore it is difficult to interpret which antigen is the safest and the most effective. The difference in the study population selected for treatment, the number of patients, the type and duration of warts and the number of intralesional injections could be the reasons for this variation in response. It is possible that a better response might have been obtained if we had injected a higher volume of vaccine (>0.3 ml), or if a pre-determined volume was injected on the basis of testing the subjects for pre-existing immunity to mumps, measles and rubella. Possibly, the response could also have been augmented if more treatment sessions were carried out in patients who showed a lesser response, as was done by Nofal et al.[4]

We acknowledge the limitations of our study; it was an open-labelled study without randomization or controls. However, our experience of intralesional immunotherapy with mumps, measles, rubella vaccine suggests that it could be a promising treatment modality for patients with multiple cutaneous warts with the additional advantage of widespread and sustained effects against warts at distant sites.